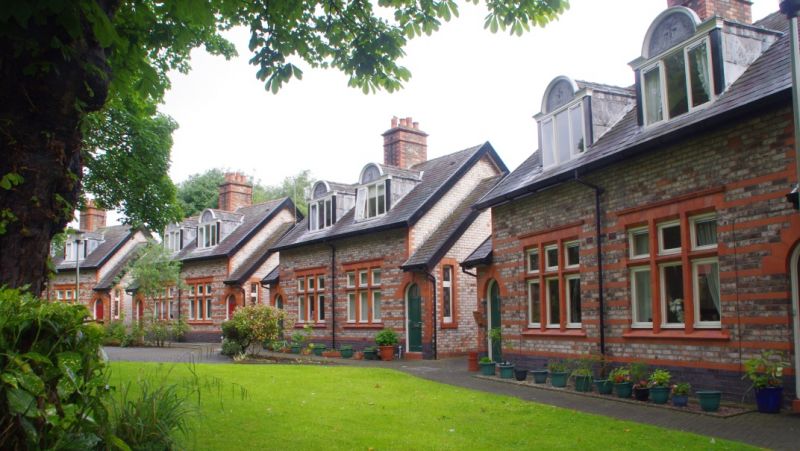 Group of almshouses known originally as 'Ainsworth Homes'. 1907, architect not
known. Pale-coloured brick in stretcher bond with terracotta detailing; Welsh
slate gable-end roofs. Single-storey with attic. Six semi-detached cottages form
a shallow crescent with perimeter walls enclosing gardens. The end cottages are
treated with greater embellishment than the others and differ slightly in plan.
The plan is ingenious and compact: small entrance hall, and stairs over
scullery contained under lower roof-lines to side of each cottage; parlour and
kitchen to rear; privy and coals occupy small rear wing. All the various parts
expressed externally under different roof pitches.

Exterior: end pairs match
each other with corner tower under leaded original cupola providing a terminal
accent (and containing an additional box room). Otherwise they are treated
similarly to the other pairs. Terracotta banding; 3-light window to each
cottage with mullions, transom and flat window arch, all in terracotta; dormer
under segmental gable; 2-light casement, some altered. Round-headed arched
doorway with terracotta voussoirs and keystone. Side elevations attractively
treated with different roof lines over the various parts - gabled over hall and
stairs, lean-to over scullery, and lean-to facing in opposite direction over
privy wing. Windows with terracotta surrounds. Rear with gabled dormer and
2-light casement; 4-pane horned sash window to ground floor, and doorway, both
under depressed terracotta arches. These cottages are a very carefully designed
set of almshouses, the detailing is of high quality, and the overall effect is
an interesting example of Edwardian picturesque composition. The front gateway
with shaped gable and segmental pediment containing the words 'AINSWORTH HOMES
BUILT AD 1907', over segmental keyed arch, is attached to a low wall and is all
included in this listing.