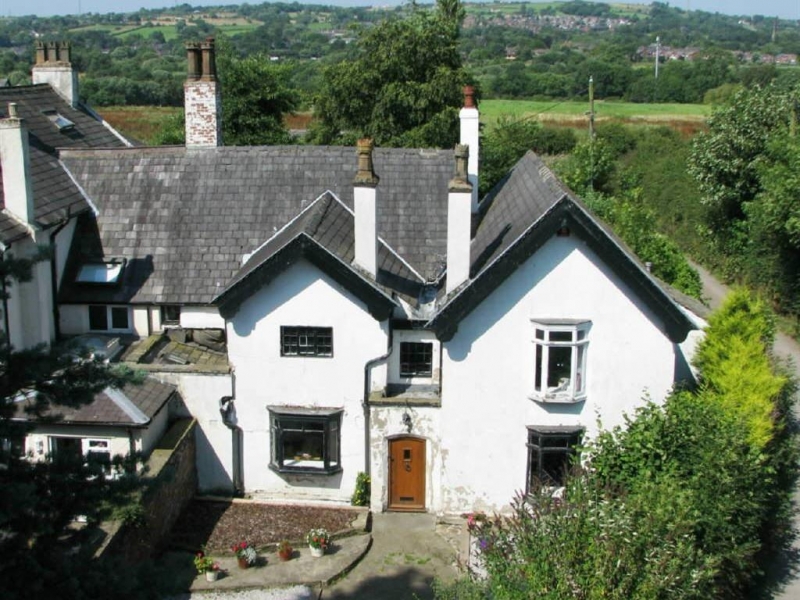 Originally an open-hall cruck-framed house, originating in C13, altered and extended
in C16. Remodelled 1849. Front of two unequal advanced 2-storeyed gables with porch
between. Rendered. Wide plain C19 barge-boards, rounded at bases. Moulded oriel
window of C19 to each gable (but upper one on left gable is plain horizontal window).
Behind and to left, at right-angles to gable wings, is the tall l½-storey range with
steep slate roof which contains the medieval hall, with wide, well-formed upper cruck
frame, ceiled with joists on heavy cross-beams in C16 or C17. South front originally
"black-and-white" C16 range kitchen, parlour, etc, was rebuilt in gabled style in
1849, became Brandlesholme Hall and is not included. In time of Henry I it was residence
of bailiff to Montbegon and later de Lacey lands whose name was Brandlesholme.
By marriage, house descended to Greenhalghs who remained for 11 generations till 1730s.
John Greenhalgh was made Governor of Isle of Man by Early of Derby in 1640, fought
with distinction at Worcester and died of wounds same year.