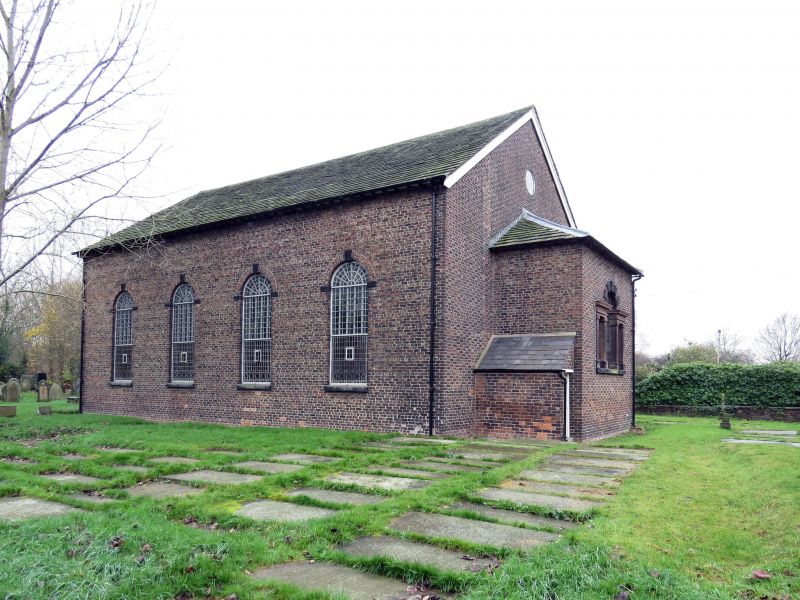 II*
Church, originally a chapel of ease. 1757-9, with minor later alterations. By Isaac Shaw. Flemish bond brick with graduated stone slate roof. 4 x 2 bays with west gallery and small chancel. Each bay has a round-arched window with impost blocks, keystone and leaded lights. All the windows except for that to E retain their original oak frames and their original glazing in the upper halves of the lights. The elliptical-arched door has a rusticated stone surround and the original oak-boarded entrance doors retain their iron strap hinges. 2 west windows blocked when gallery inserted in 1829. The chancel has a Venetian window and a hipped roof. A small turret with cupola on the west end was removed in 1987.
INTERIOR:
Nearly all of the original box pews survive, complete with painted numerals and four brass owner's plates, two dated 1759. The coved ceiling has a plasterwork central rose consisting of radiating rococo fronds. Font based on a marble wash bowl. Original communion rails and dado panelling to the chancel. West gallery added in 1829 is carried on two slender iron columns and retains its original seating. The two west windows were blocked as part of this alteration. Wooden reredos of c1872 and stained glass to E window. Original pulpit. Reading desk slightly altered. Original floor of stone flags in the alleys and elm boards under the pews.
HISTORICAL NOTE:
The church was built at the expense of Mary, Countess of Warrington and Stamford, of Dunham Massey, as a chapel of ease to Bowdon. It received a separate parish in 1887.
SUMMARY OF IMPORTANCE:
This church, which is in the care of the Churches Conservation Trust, is outstanding as a remarkably little altered mid C18 small church which retains so many of its original fittings intact.