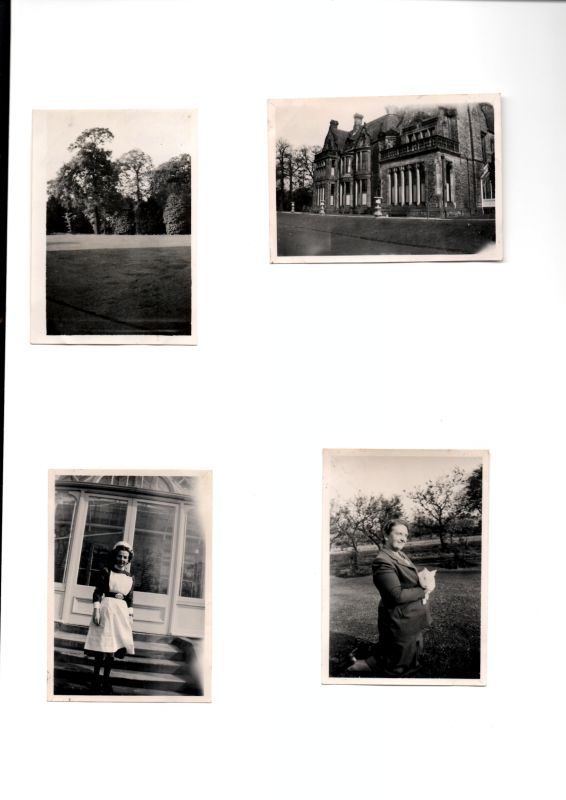 PLAN: Two-storey rectangular axial plan with entrance and porte-cochere to north-west and conservatory to south-east linked by a wide spine corridor, or entrance hall, with rooms to either side. 1st-floor spine corridor also.

Entrance façade dominated by asymmetrically placed porte-cochere with semi-circular arches, that to front containing quatrefoil tracery bars, modillion eaves and parapet with central cartouches and corner finials. Above is a three-light mullion and transom window, a cartouche dated 1874 with a strapwork surround, and an elaborate shaped gable with chimney stack projecting on either side.

Five-bay garden elevation (south-west) has shaped gables to bays 1 and 5. Bay 1 has two-storey bay window, with a ground-floor bay window to bay 5. Both have mullion and transom windows on the 1st floor, cusped mullion windows on the ground floor and a pierced parapet. Bays 2 and 3 have semi-circular two storey bay windows with moulded bands, mullion windows, and smaller gablet/gable above. Bay 4 has an ornate three-sided oriel carried on a polished granite column, traceried leaded lights, three triangular pediments and a steeply pitched conical roof which turns into a spire above an arcaded timber stage. To the right (south-east) is a recessed conservatory built against a wing which projects south-east in line with the main house. The timber construction is a recent replacement of the original design, set on the original stone plinth walls.

Four-bay north-east elevation of the main house has mullion windows with shaped gables to bays 1 and 2, a gablet to bay 3, and shaped gable to bay 4 with two-storey canted bay window. Attached to west side of bay 2, and projecting at a right angle, is a contemporary pedestrian gateway and screen wall of rockfaced stone with buttresses.

North corner reception room has carved timber dado panelling, coffered timber ceiling, and red and black marble fireplace in the centre of the north-west wall, set beneath a window, a design feature used throughout the house. Fireplace incorporates two square tiled panels depicting a musician to the left and an artist to the right. Full-height carved, gilded and painted timber over mantel with marquetry and mirrors, with central sliding screen which can cover window. Billiard room in east corner, south-east wing. Coffered ceiling painted with pictures of draughts, dice, cards, snooker, billiards and pipes circumscribed by the motto `Play not for gain, who plays for more than he can lose with pleasure stakes his heart, perhaps his wife too, and whom she hath bore'. Banded stone fireplace with carved heads and decorative tiles. On south-west (garden) side of entrance hall are two large reception rooms, one to either side of main staircase. Room to right (north-west) has moulded coffered ceiling painted with a variety of birds, including a peacock in the centre, representing Aesop's fables, the woodwork painted gold. Two-tone marble fireplace, as has smaller adjoining room. Room to left (south-east) of staircase has coffered ceiling painted with foliate motifs.

Staircase opens onto 1st-floor spine corridor through a second carved stone Tudor arch, supported on foliate corbels. Corridor has timber coffered ceiling with two glazed lanterns and a crocketed hooded chimneypiece of banded stone, with decorative tiles, on north-east wall. A number of nine-panelled doors, with timber doorcases of pilasters, entablatures, and small segmental pediments. South corner room has acanthus leaf cornice and marble strapwork chimneypiece. Adjacent room at south-east end of corridor has three-light stained and painted glass window. To right (north-west) of staircase is a paired doorcase leading into two rooms, both with moulded cornices, and similar fireplaces, one of red veined marble with tiles depicting Spring and Summer, the other of grey marble with tiles of Autumn and Winter, both with overmantel mirrors. North corner room has red and black marble fireplace beneath window. To right of corridor fireplace is a stone archway supported on foliate corbels, behind which is a suite of four rooms with four-panelled doors. Room in south-east wing retains moulded cornice, and carved timber fireplace with rose tiles. Probable dressing room has plain marble fireplace with patterned tiles.

Secondary staircase, with turned wooden balusters and swept handrail, runs from service area, on north-east side of entrance hall, up to 2nd-floor servants' accommodation, which retains at least two original fireplaces.

HISTORY: In 1874 the seventh Earl of Stamford sold the ten acres of land on which Denzell stands to Robert Scott of 56 Moseley St, Machester, a spinning manufacturer. The house, which he built in 1874 for himself and his wife, cost £18,000, though it was rumoured to be over £30,000 in all. In 1904 Denzell House was sold to Samuel Lamb, a wealthy shipper from the firm Coddington and Lamb of Peter St, Manchester, who developed the gardens. After his death in 1936, Samuel Lamb's children gave the house and its grounds to Bowdon Urban District Council. Whilst the grounds became a park, in 1938 the house became a residential Adult Education College for a short time, before becoming an evacuation centre for expectant mothers during World War II. Subsequently it opened as an annex to Altrincham General Hospital and remained in use under the regional health authority until 1979, when it became a retirement hospital for the elderly before closing in 1987. The house stood empty for a few years before being renovated into offices.

At an unknown date the entrance gates, lodge, clock tower and archway to the stable yard were demolished.

REASONS FOR DESIGNATION
Denzell House is designated at Grade II* for the following principal reasons:
* It is a notable, very complete and high quality example of a detached villa of this period
* It has an outstanding interior decorative scheme
* The richness of medieval inspired detailing is in manner of interiors by leading British architects at similar date
* There is a high degree of craftsmanship and high quality materials are used both externally and internally
* As an inventive eclectic design by an architects' practice noted for their palazzo warehouse designs in Manchester
* As a well preserved example of a specifically commissioned late C19 house for a wealthy patron