Ruins of the Monastic Church and East Range

A Grade I Listed Building in Ponsonby, Cumbria 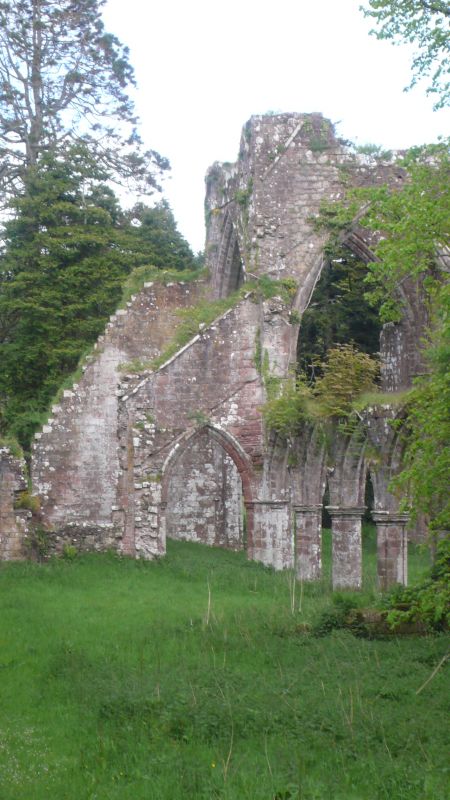 Entry Name: Ruins of the Monastic Church and East Range

GV
I
Ruins of the monastic church and east range. The south range is incorporated into the adjoining house which is listed separately. The Savignac Abbey was first established in 1135 as a daughter house of Furness. In 1137, following the start of permanent buildings, a raid by the Scots forced the monks to flee; on being refused admission to Furness, they moved eastwards and eventually founded Byland Abbey in Coxwold, Yorkshire. In 1137 Calder was re-established by monks from Furness, becoming a Cistercian Abbey in 1147; the surviving ruins date mainly from the second foundation but incorporate later alterations. Calder was suppressed in 1536, since which date it has passed through the hands of a number of owners who have lived on the site. A painting by Matthias Read (Abbot Hall Art Gallery, Kendal) of c.1730 and an engraving by the Bucks of 1739 shows that the ruins of the monastic church and east range have changed little since the early C18. Constructed of ashlar, the cruciform church has a 5-bay nave, crossing tower, transept, and an aisleless chancel. The central semicircular-headed west doorway survives intact and dates from c.1170, comprising 3 orders of roll-moulding (the outer with cusped lobes superimposed) springing from waterleaf capitals; the lower courses of the south aisle doorway are visible. Only the north nave arcade remains and this is early C13 with pointed, chamfered arches carried on alternating octagonal and compound piers. The intact crossing tower, with its pointed arches, is a rare Cistercian survival which provides additional information as to the construction of the nave. Although the tower incorporates the remains of a large triforium to both nave arcades, no remains of clerestorey openings are visible and the steep pitch of the original roof (surviving on the tower) suggests that the nave roof swept down virtually uninterrupted from ridge to aisle eaves; in order to provide adequate illumination for the interior it appears likely that oculii, in gablets, were used to light the nave via the triforium and this is a most unusual form of construction. The intact southern transept arm has a western wall passage leading from the monks dormitory to the tower stair; the east wall has 2 pointed arches on a compound pier leading into the chapels with a blind triforium arcade above. The external nook shafts to the chapels' paired lancet windows have waterleaf capitals c.1190. The early C13 north doorway survives intact in the northern arm. The chancel incorporates a sedilia with cusped decoration to the arch-heads; the chancel was lit by very tall windows in its side walls. The east range features 3 arches with decoratively moulded, shallow-pointed heads. The left-hand arch (the library cupboard) retains its central subdividing shaft; the middle arch led into the chapter house vestibule which was lit by a window in the third arch; a plain doorway to the right is the slype/parlour entrance. The six lancets above lit the monks dormitory. The eastern bay of the chapter house was lit by an ornate, wide, traceried window; it retains its vault, above which is a room with a fireplace.

The Abbey is a Scheduled Ancient Monument.