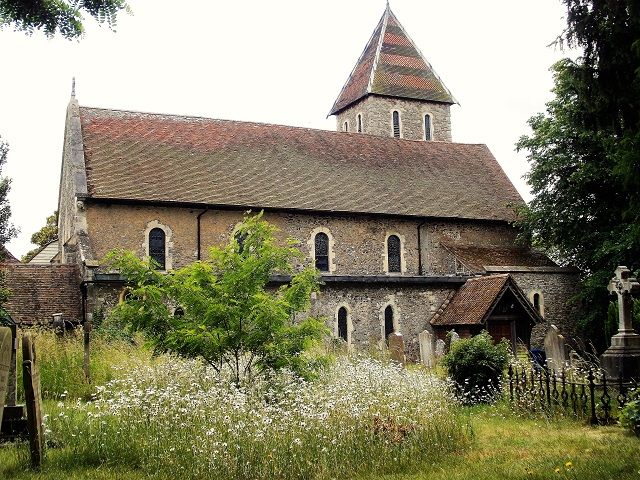 2.
Founded in 1153. The buildings immediately adjoin the Church. They
comprise the Prioress's Parlour, the Library, the Western alley of the
Cloister, the arch of the Lavatorium and the Norman doorway of the Re-
fectory. They form an L-shape. The best front faces East. The
ground floor is medieval work of chequered stone and flints. Above
it is a timber-framed structure with a plastered front, colour-
washed and over-hanging on a moulded bressummer. 4 gables with
moulded bressummers, bargeboards and pendants. The Southernmost
1 is over a projecting wing and has scalloped bargeboards, a
cove beneath the bressummer and a cartouche in the gable. Balancing
this projection at the North end of the front is a 2-storey porch.
Beyond it is a small wing backing on to the Church which forms an L
with the main building. Externally this is apparently Cl8 with a
modern addition at its East end. The West front of the main building,
which is the entrance front, has been modernised. The ground floor
is of stone, above plastered, with 4 gables having moulded bressummers,
billet-moulded bargeboards and pendants. Tiled roof, Modern windows.
The stained glass artist Thomas Willement was responsible for most
of the Cl9 alterations; he also incorporated some medieval stained
glass into his design for the interior.