A Grade I Listed Building in Eythorne, Kent 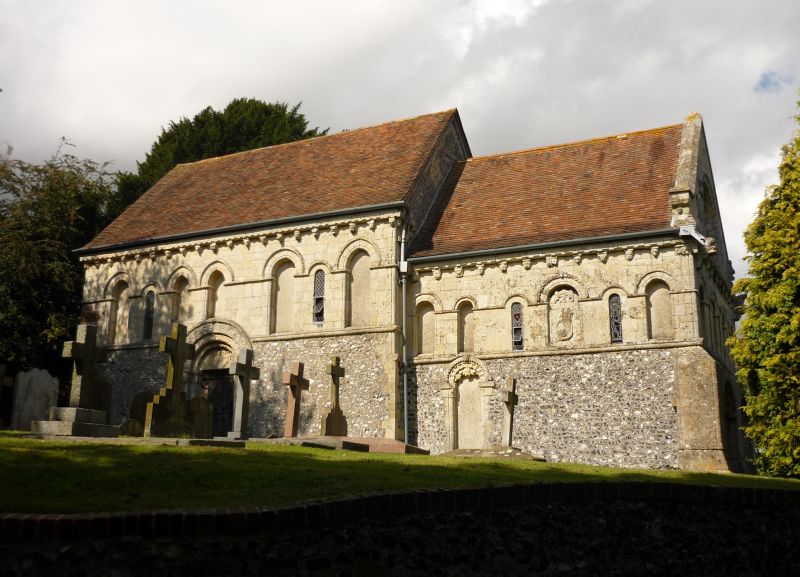 EYTHORNE BARFRESTONE
TR 25 SE
3/11 Church of
St Nicholas
11.10.63
GV I
Parish church, Circa 1180, restored 1839-42 by R.C. Hussey. Flint and
Caenstone ashlar with plain tiled roof. Nave and chancel. Complete if
small, very finely and sumptuously decorated late C12 building, only a
2 light C15-window in the west wall not of C12 date although here also
is a C12 lancet and quatrefoil. The lower half of the walls throughout
are of flint, with ashlar above with blind arcading except on the west
wall and with corbel table to roof. The arcading generally alternately
large and small semi-circular arches, the latter with lancet windows, with
pointed heads where pinched in above north and south doorways. East end
with arcaded and weathered base with buttresses, and large wheel window,
the spokes consisting of colonnettes,with beasts' heads as capitals, with
leaves and winged beasts in the surround, with the arcading and lancets
below. Recesses surround the wheel window with fragments of sculptures
of the Evangelists' symbols, and of a Knight on horseback. Brackets to
left and right on gable ends bearing crouching lions. Sculptural fragment
on south chancel wall, mutilated and indecipherable but for the
architectural tabernacle. Otherwise the ornament is expressed in the 3
doorways: north door, with attached shafts with enriched capitals, and
imposts to the door surround with bestial heads, with 4 orders to surround;
an enriched chevron, roll mould, triple zig-zag and a roll mould. Priest's
door (south chancel wall), with billet moulded hood and chevron moulded
side pieces, with 3 heads dropped down from concave tympanum. The south
door has the richest expression of sculpture. Two sets of attached shafts,
the capitals carved with beasts and charging armoured knights, the inner
shafts with water leaf volutes as are the spurred bases to the shafts.
Three orders around tympanum, with an outer enriched, foliated roll mould,
then a dozen sunk medallions with signs of the zodiac and the labours of
the month, but also with some warriors and Samson, with a thick roll within
this with animals cavorting and playing musical instruments, with a figure
of a bishop at the apex. An inner roll of enriched foliate design surrounds
the tympanum, which has loops of foliage enclosing figures of angels, human
heads and beasts, with central figure of Christ in a mandorla. The door
itself with 3 large C19 strap hinges scrolled and bifurcated. Scratch
dials are cut into the doorway surround. Interior: Nave and chancel with
C19 wooden tunnel vault roofs. All the window reveals have roll moulded
surrounds. Continuous enriched band in nave at sill level and raised over
door heads, with trefoil and flower ornament, with carvings on north wall
of a fox and a rabbit apparently stewing another rabbit and a monkey blowing
a pipe; with C19 wyvern and lion.Dogtooth over rere-arches of nave windows.
Chancel arch: with niches to left and to right with attached crocketed
shafts, roll mould and zig-zag. Chancel arch itself with a billet moulded
drip, triple zig-zag moulding, chevron moulded and plain inner rolls.
Moulded imposts carried as if a cornice across the side niches, and with
large attached zig-zag shafts with crocketed capitals similar to those
found at Bredgar, Bapchild and several other churches in the Sittingbourne
area, all ultimately based on Canterbury Cathedral work of the 1170s.
The decorated strings in the chancel, embattled in part with punched holes
in relief, and the dogtooth show signs of the C19 restoration (involving
the complete taking down and rebuilding of the chancel stone by stone).
The wheel window surround is, as with the exterior, decorated with winged
beasts and floriate patterns. Fittings:
Aumbries in north and south walls, the latter with a trefoiled head.
Glass: C19 in style, in the wheel window, by W. Miller, Paintings:
Very faint traces in the chancel north-east window, the only remains
of very extensive paintings destroyed in the 1839-41 rebuilding.
Monuments: Thomas Boys d.1599, wall plaque in chancel. Black and
white alabaster monument with strapwork base, and side pieces with
ribband and strapwork decoration, topped by cornice with ball and
steeple finials and achievement in strapwork surround. A plain black
and white wall plaque with simple surround and cornice of similar
date, but illegible inscription is on the south wall. (See B.O.E.
Kent II 1983, pp 133-4).