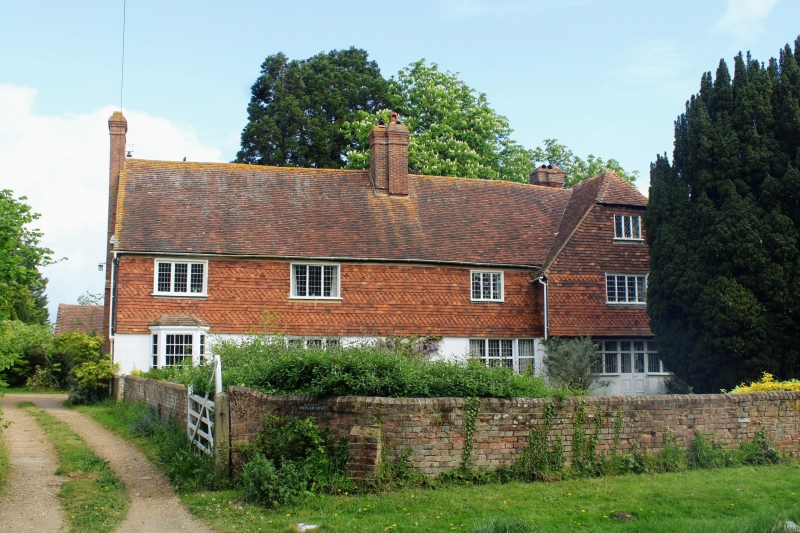 Farmhouse. Crosswing is early/mid C16, refurbished and enlarged in the late
016/-early C17, some modernisation in the early C18, the mid C19 and circa
1970. Timber-framed; much of the ground floor has been underbuilt with C19
brick, rest clad with C19 red tile including bands of scallop tiles; brick
stacks and chimneyshafts; peg-tile roof.

Plan: Basically an L-plan building. The main block is set back facing the
road to the south. It has a 3-room plan. At the left (west) end is a parlour
with a projecting gable end stack (a C19 rebuild). Next to it is the former
hall or dining room, a large room sharing an axial stack with the right end
room which is an entrance lobby containing the main stair. At the right end
is the kitchen crosswing which projects backwards and very slightly forward.
The front room was the kitchen but has since been upgraded and the kitchen
moved into the room behind. There is an axial stack between these 2 rooms.
If the rear room was heated the fireplace is blocked. Small service room
behind.

The crosswing appears to be the oldest part. It has been much altered but the
framed walls are original. There is evidence that the front bay was storeyed
and the first floor room still jetties out at the end. The rest probably
contained an open hall, and another storeyed end to rear. Any evidence is now
hidden. However the roof was rebuilt in the late C16/early C17 when the old
house was rearranged as a kitchen crosswing serving the new built main block.
Essentially the present layout dates from this time. There were some
alterations in the C19; the outer walls were underbuilt with brick; the west
end stack was rebuilt the old kitchen was upgraded, the present main stair was
built (probably replacing a stair in the same room) and the entrance lobby
fireplace was probably introduced.

House is 2 storeys with attics in the roofspace and an C18 or C19 lean-to
outshot to rear of the main block.

Exterior: Irregular 3:1-window front. The ground floor windows are all C19
and C20. The 2 to right include doors and contain rectangular panes of leaded
glass. The hall/dining room has French windows with glazing bars and the
parlour has a canted bay window containing a 12-pane sash. The upper windows
contain rectangular panes of leaded glass, all except one with diamond panes
of ancient glass. Some of the window frames may be as early as the early C18.
The main roof is gable-ended to left and the crosswing which jetties forward
at first floor level and the roof is half-hipped. On the right side of the
crosswing some of the original ground floor framing shows towards the front.
To rear of the main block are 3 first floor windows, all late C16/early C17
with ovolo-moulded mullions.

Interior: The oldest fabric survives in the crosswing. The framed outer
walls have large curving braces and are certainly original towards the front.
Its wall plate level is lower than that of the main block. The evidence is
hidden to rear. The jettied front end is original and its joists are set into
a timber which now serves as a crossbeam although redundant mortises along its
soffit show that it was originally a rail in a crosswall.

The rest of the main structure is late C16/early C17. Some of the framing is
exposed internally in the rear wall where each bay has a single curving
tension brace. The owner has photographs of similar framing on the front-wall
from which the tiles were hung. Beams, where they are exposed are chamfered
with step stops. Both kitchen and hall/dining room have large brick
fireplaces, the former with a chamfered oak lintel and the latter with a Tudor
arch head (there is a smaller version in the chamber above). Both the
hall/dining room and parlour were superficially modernised in the mid C19.
However, in the parlour, the lath and plaster has been removed from the
internal partition revealing the late cl6/early C17 frame and it is painted
with contemporary decorative scheme; painted panelling enriched with floral
motifs in black, white and turquoise on an ochre ground below a strapwork
frieze containing texts in black, white and red. The paintwork is remarkably
complete and fresh. According to the owner similar ancient painting remains
hidden in the hall; but is less stable and would be expensive to expose. In
the parlour there are a couple of small holes in the painted lime plaster
which show the surface skin is laid onto a mud plaster base which was combed
to key the finishing skim. On the first floor, particularly in the parlour
chamber the combed patterns on the base plaster are exposed; they are quite
decorative. One late C16/early C17 panelled door survives on the first floor.

The early C18 modernisation is represented by a couple of bolection-moulded
chimneypieces, and the mid C19 modernisation by superficial finishes to the
front rooms and the open string stick baluster stair with shaped stair
brackets.

The roof structure is entirely late C16/early C17. In the main block the wall
posts have jowled heads. 4-bay roof of collared tie-beam trusses with clasped
side purlins, diminished principals, queen posts and small curving windbraces.
The contemporary crosswing roof is 3 bays with similar trusses missing only
the queen posts.

The owner's documentary researches have discovered a reasonably complete list
of owners since circa 1556 when it was occupied by one Richard Rabblys. It
was sold in 1577, 1625 and circa 1635.

Poplars Court is an attractive and well-preserved farmhouse of yeoman status,
especially late C16/early G17 with an earlier core. The wall painting is a
notable survival.