A Grade I Listed Building in Hadlow, Kent 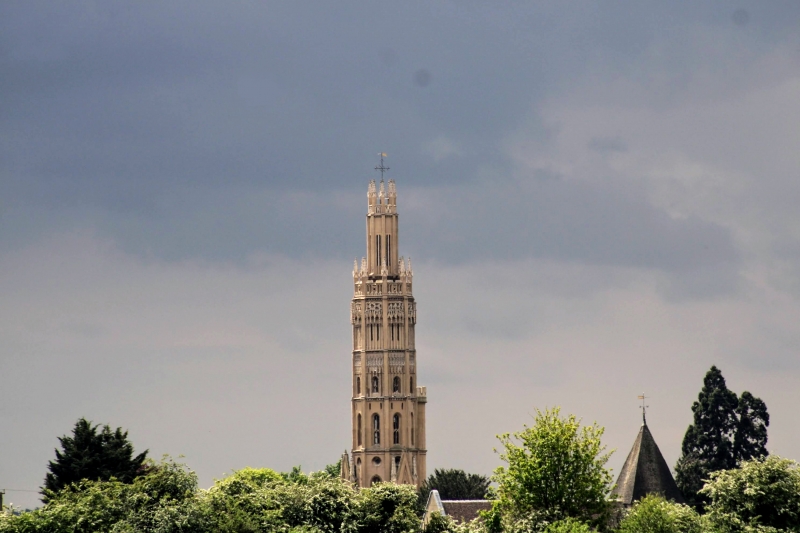 Tower, part of the remains of Hadlow Castle, a large Gothick house of late C18
origins. Tower begun 1838 (lantern added in 1840) for Walter Barton May to
the designs of George Ledwell Taylor (Thirsk); modelled in part on William
Beckford's 1812 tower (collapsed 1825) at Fonthill, Wiltshire, designed by
James Wyatt. Rendered brick to imitate stone with the finer architectural
detail and decoration built up in the Roman cement render. Gothick.

Plan: The tower was added at the south east corner of the original house
(built by May's-father) with the stable courtyard to its north east. The main
house was dismantled in 1951: what is left today is the stable courtyard,
converted to housing, with the tower in the south east corner linked to the
courtyard buildings by a freestanding wall, formerly the west wall of the
house. Tower octagonal on plan with a circular stair turrett adjoining at the
south west and a doorway on the north face. A lower, rectangular tower
adjoins at the west. The original function of the main tower, beyond
advertising the wealth and architectural ambition of the family, is obscure.
The interior is relatively plain, especially when comapred with the lavish
Interior of the house. It does not appear to have been heated originally and
the smaller tower, between it and the house, was used as accommodation for men
servants prior to 1951 (Thirsk).

Exterior: An extraordinary landmark, especially in the flat Hadlow landscape.
170 feet high, plus the lantern and covered with quite delicate Gothick detail
in Roman cement, becoming progressively more elaborate on the upper stages.
Slender 3-tier gabled projections to each of the cardinal faces with diagonal
buttresses, steep gables and tall crocketted pinnacles. The 3-stage stair
turret has a pierced parapet and lancet window. The stages of the tower are
marked by string courses of various designs, some enriched with fleurons. The
faces of the tower are divided by buttresses which rise above the pierced
parapet as tall pinnacles with gabled crocketted pinnacles. Tall, buttressed,
pinnacled lantern largely obscured by scaffolding at time of survey (1988).
Various tall, Gothick windows, matching on each stage. The lower stage
windows are 2-light and transomed with flamboyant tracery and moulded
architraves with engaged shafts with capitals; incised crosses above the
windows and, above them, a string course with a tier of engaged battlementing.
The second stage also has 2-light transomed windows with quatrefoil windows
above. Similar, narrower windows to the third stage with pairs of lancets
above. The fourth stage has smaller transomed windows, each wall face covered
in blind arcading in 2 tiers. The fifth stage also has 2 tiers of decoration,
the lower tier trefoil-headed arcading, some blind, some glazed, the upper
tier decorated with blind tracery and incorporating corbelled projections.
Some of the Roman cement detail has fallen away. The gabled projections each
have 2 tiers of tall lancet windows with moulded architraves, the embrasures
filled with cusped lattice with traceried windows just below the gables. The
north projection has a very tall, chamfered 2-centred doorway. The adjoining
4-storey servants' tower is embattled with a rounded projecting stair turret
at the north west and various Gothick windows: lancets, 2-centred with cusped
Y tracery and timber flamboyant traceried windows in square-headed embrasures.

Interior: Plain by comparison with the exterior but preserving some original
doors with applied Gothick panelling.
A remarkable example of ambitious Gothick design and an outstanding landscape
feature.

The May family was essentially local and sum of the wealth used on the tower
may have derived from hop-growing (Thirsk).