A Grade I Listed Building in West Peckham, Kent 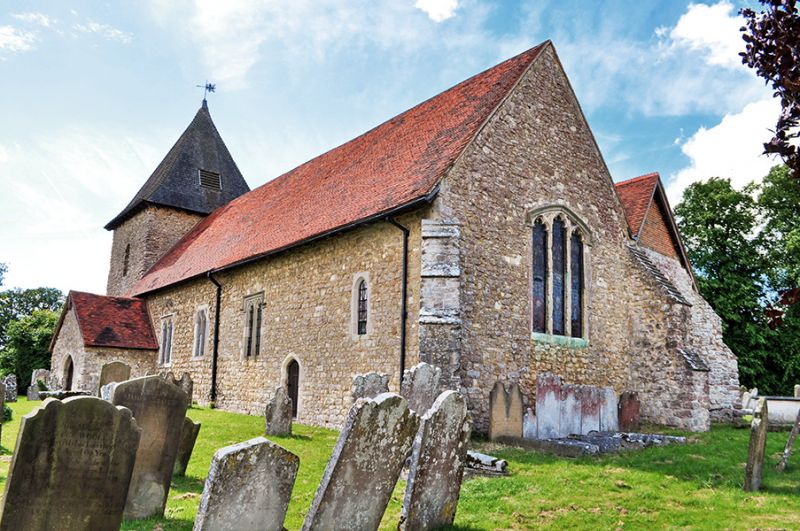 Later medieval parish church with Saxon tower and C17 Pew. Nave and chancel,
each with north aisle, west tower and south porch. Ragstone rubble walling
with tiled roofs. Saxon tower of 2 different dates in ragstone rubble, with
pyramidal roof, splayed at base. Windows at upper level of tower single-splayed,
below double splayed. Nave and chancel in one, with one south lancet in chancel.
Other windows square-headed C14 & C15. Early C14 north aisle to nave that to
chancel built as chantry chapel by Sir John Colepepper, who had given Duke's
place to the Knights Templars. Chapel fitted out at 2 dates in C17 as Gear
Pew. West and with pews surrounding over vault itself. Open into nave and
north aisle by 2 5-bay colonnades with over-slim wooden Corinthian columns on
panelled pedestals supporting heavy but well-covered wooden cornice. East
and with stairs with wooden balustra down to external door and entrance to
vault, Doorway between 2 parts topped by broken segmental pediment containing
coat-of-arms of Geary family. Whole doorway as well as backs of pews adjoining
topped by carved wood floral decoration. Open work panels behind these 2
pews with parapet supporting volutes either side of door. Panelled wooden
roof to pew with rough cornice. Aedicular tablet to Sir Nicholas Millar, and
1658. Large marble monument to Leonard Bartholomew, and 1721, and his wife,
Elizabeth. Reclining figures on shelf attributed by Mrs Esdaile to Richard
Crutcher.