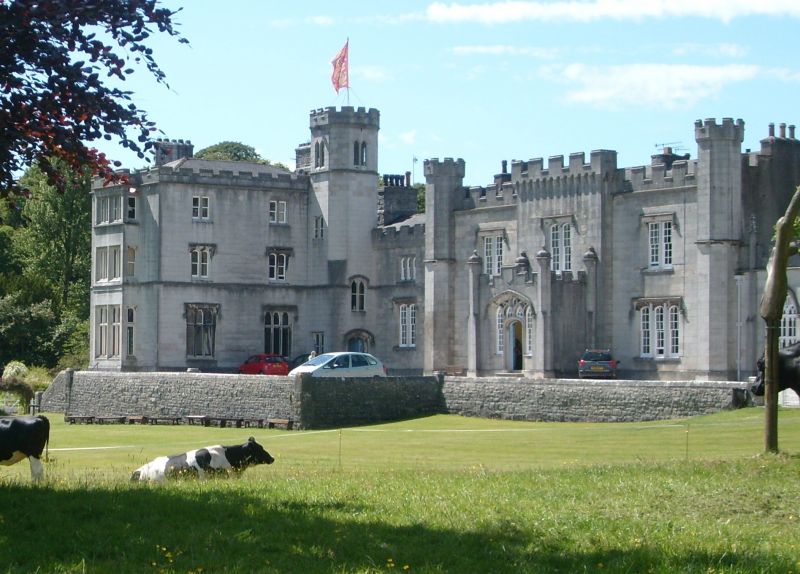 Country House, 1765, probably by J. Hird, with earlier remains. Gothic south-east front early C19th, possibly by Thomas Harrison. Tower at west end of the facade 1870 by Paley and Austin. Facade of limestone ashlar. Rear roughcast rubble with sandstone dressings. Slate roof. Central block of 2 storeys and 3 bays, battlemented with octagonal corner turrets. The central bay projects with a one-storey battlemented porch having clasping buttresses with ogee caps. The moulded doorway with 4 centred head is set within a wider chamfered 4-centred opening with tracery. Windows are chamfered with mullions and hood moulds, of 3 lights on the ground floor and 2 on the 1 st. The lights have 4-centred heads, except for the outer ones on the 1 st floor, and have sashes with glazing bars. Those to the porch have elaborate tracery in their heads. To the right is a single-storey 2-bay link with battlements and pinnacles. The 1 st bay has a window with tracery, the 2nd window being blank with painted tracery. The right-hand pavilion appears to be a chapel, with pinnacled buttresses, a window with panelled tracery, and a cross on the gable apex, but is in fact the stable. At the far right is a glass conservatory. At the left is a 2-storey link to the 3-storey battlemented tower by Paley and Austin, with a 4-storey turret in the angle. The tower has mullioned windows of various descriptions and a canted bay window to the south-east wall. To the rear of the tower is a 3-storey wing with added buttresses having sash windows with glazing bars in plain stone surrounds, except for one window in the west wall which has a rebated and chamfered surround. The east wall of this wing has some C17th dressings on the ground floor. 2 chamfered door surrounds with triangular heads under a drip mould and a chamfered window surround with drip mould. The rear wall of the main block has sash windows with glazing bars in plain stone surrounds, the stair window having a pointed head and traceried glazing bars. The east wall of the stable block has a central pedimented bay and stable doorways with semi-circular heads.
INTERIOR: has an entrance hall with a screen of clustered columns with moulded 4-centred arches, and a cantilevered stone stair with swept handrail and stick balusters. Source
Country life, 11th May 1951 pp 1452-1455 and 18th May 1951 pp 1538-1441.