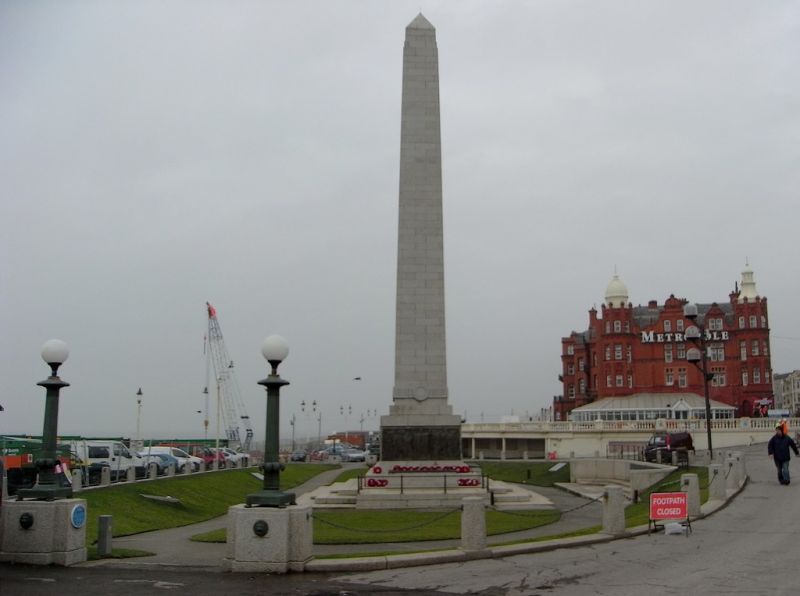 DESCRIPTION: the memorial and its associated structures are constructed in white granite with Graeco-Egyptian ornament. It consists of a tall obelisk on a square pedestal, on a three-tier plinth, standing on a stepped platform. The base of the obelisk has a raised band of incised Greek key ornament with an overlaid laurel wreath in the centre of each side, those on the front and rear (east and west) sides inset with coats of arms. The front and rear faces of the pedestal break forward slightly, each with a broad raised panel framed in stylised palm branches inscribed IN MEMORY OF / OUR / GLORIOUS DEAD / 1914 -1918 / 1939 - 1945.

The north and south faces of the pedestal have finely modelled bronze relief panels in which figures proceed towards a central allegorical female figure: on the south side, labelled 1914, depicts Britannia in the guise of Justice surrounded by young men, some in uniform and others apparently leaving their trades to enlist. At the left hand side, a pregnant woman holding a child looks on. The north side, labelled 1918 depicts Peace holding a dove and a wreath, with her head bowed. The left side of the plaque depicts war weary soldiers standing in front of an artillery piece, and over the body of a dead German soldier. The right side shows a grieving woman and man, a grieving nurse, a girl and her cat and a bare chested youth in a martial pose, with a rifle over his shoulder. The reliefs wrap around the returns of the front and rear faces of the pedestal where they depict sentinel figures flanking the inscribed panels, comprising a pair of soldiers (front) and an airman and a seaman (rear).

Projections on the north and south sides of the platform carry a pair of free-standing granite structures based on Edwin Lutyens’ Stone of Remembrance, the outward faces inscribed, respectively THEIR NAME LIVETH / FOR EVERMORE and LEST WE FORGET. These have shallow-pitched lids of cast bronze with antifixae, each slope divided into 16 panels with bead-and-reel frames, bearing the names of the fallen. They are enclosed by a bronze balustrade with lion masks to the post heads. Abutting the front of the plinth is a third granite structure with a single sloping lid in cast bronze with the names of the 616 dead of the Second World War. Also named are the dead from post-war conflicts including the Aden Troubles and the Falklands Conflict.

To the east is a semi-circular singers’ platform known as the ‘choir loft’, installed in 2008, dedicated to those who struggle for freedom in all conflicts. It is built in white granite with a contrasting band of blue granite inscribed: SING SOFTLY. BE STILL. CEASE. This forms an integral part of the ensemble.

The memorial is enclosed by granite kerbs with a series of low, tapering granite posts and chain links. The entrance to the south is flanked by squat cruciform piers with a bronze lion mask roundel to the front face, surmounted by a fluted bronze column with acanthus leaf ornament and a globe lamp.

The aftermath of the First World War saw the biggest single wave of public commemoration ever with tens of thousands of memorials erected across England. This was the result of both the huge impact on communities of the loss of three quarters of a million British lives, and also the official policy of not repatriating the dead which meant that the memorials provided the main focus of the grief felt at this great loss. One such memorial was raised at Blackpool, as a permanent testament to the sacrifice made by the members of the local community who lost their lives in the First World War.

Blackpool War Memorial was erected in 1923 in an existing sunken garden to the west of Princess Parade, Blackpool’s northern promenade. The cost, £17,000, was born by Blackpool County Borough Council out of its wartime munition profits. It was unveiled in front of a crowd of 10000 people on 10 November 1923 by Brigadier General TE Topping CB CMG DSO TD ADC and dedicated by Rev A W R Little. The accompanying structures bearing the names of the 907 fallen were unveiled by the mothers of two VCs, Lieutenants Victor Smith and Stanley Boughey, who died in the war.

Gilbert Ledward (1888-1960), the son of the sculptor Richard Arthur Ledward, was born in Chelsea. He studied under Édouard Lantéri at the Royal College of Art and subsequently at the Royal Academy Schools. In 1913 he achieved the double honour of the travelling studentship and gold medal, and the first Rome scholarship in sculpture. He served in the Royal Garrison Artillery during the First World War and was appointed as an official war artist in 1918. Ledward was Professor of Sculpture at the Royal College of Art in 1927-9 and president of the Royal Society of British Sculptors 1954-6. Ledward adhered to representational sculpture grounded in realism and his reputation was first formed by his work on war memorials which include the Guards’ Memorial in London, Stockport War Memorial Art Gallery and Harrogate War Memorial on which, as at Blackpool, he collaborated with the architect and planner Ernest Prestwich. Prestwich (1889-1977) studied at Liverpool School of Architecture and Department of Civic Design where he won a competition for the completion of Port Sunlight Village in 1910. He went on to design a number of civic buildings and several war memorials.

The monument was cleaned and repaired in 2009. Grants for this work were given by the War Memorials Trust, English Heritage and the Wolfson Foundation.

Blackpool War Memorial, erected in 1923 to a design by Ernest Prestwich and with sculpture by Gilbert Ledward, is listed at Grade II* for the following principal reasons:

* Sculptural interest: for the high-quality bronze sculptural plaques by Gilbert Ledward, a leading sculptor and President of the Royal Society of British Sculptors, illustrating the role of women both on the Home Front and in uniform, and a depiction of the corpse of a German soldier;

* Rarity: as a rare example of the depiction of women on a war memorial, including a wife and child left behind by enlisting men, a nurse, a grieving widow and a small girl, and an extremely rare depiction of a dead German combatant;

* Architectural interest: as a finely constructed and imposing white granite obelisk 30m tall, with well-crafted relief sculpture to the base of the obelisk and plinth;