Lever Bridge, staircases and a summer house in Rivington Gardens at SD 6384 1422 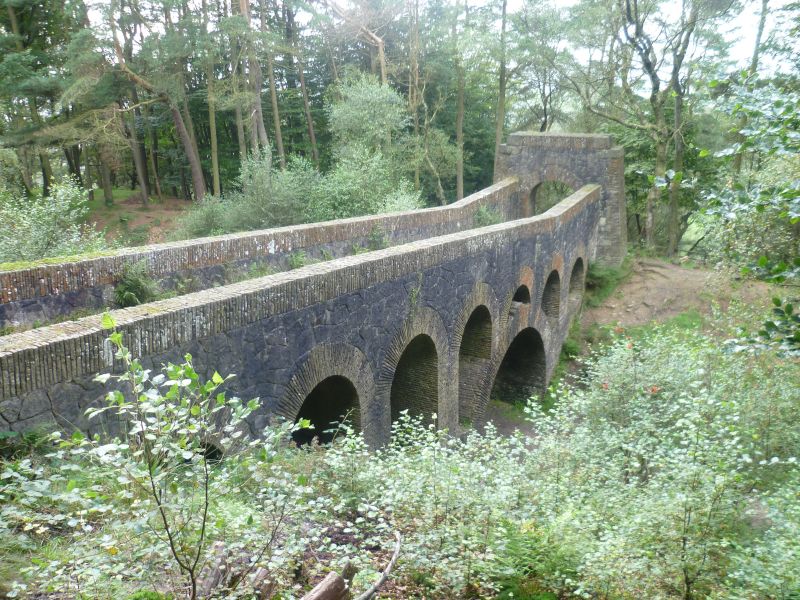 Lever Bridge, associated staircases and flanking walls to east and west, and a summer house to the east within Rivington Gardens.

At the top of the staircase there is a single-storey flat-roofed summer house with a central rectangular entrance accessed by two steps and flanked by columns of thin, stacked gritstone. Slightly protruding bays to either side each have a centrally-placed three-light stone mullion window with rock-faced gritstone surrounds. Staircases with associated flanking walls lead upwards around the north, south and rear sides of the summer house and gave access to a viewing deck surrounded by a parapet on the roof. Access to the interior of the summer house and its viewing deck is blocked by iron railings.

Rivington Gardens was one of a series of three major private gardens produced by Thomas Hayton Mawson (1861-1933) in collaboration with the industrialist and philanthropist William Hesketh Lever, Lord Leverhulme (1851-1925). The Rivington site was purchased by Lever in 1899 as a parcel of land which included the area now occupied by Lever Park to the west. Lever had already formulated ideas on how the grounds might be developed and in 1901 a single-storey wooden bungalow called 'Roynton Cottage' and intended for weekend visits and shooting parties was designed by Lever's school friend Jonathan Simpson. In 1905 Lever met Mawson who collaborated with him in the design of the gardens over the period 1906-22. However, others were also involved in the design including Thomas's son, Edward Prentice Mawson (1885-1954), who undertook the overall design and in the latter years was as much responsible for the project as his father, Robert Atkinson (1883-1952) who drew illustrations in the journal 'Civic Art' in 1911, and the landscape and architectural firm of James Pulham & Son who, in 1921, were responsible for a Japanese style garden and a steep and rugged ravine with waterfalls. Lever himself also influenced the gardens' layout, designing a seven-arched bridge across Roynton Lane.

In 1913 the bungalow was destroyed by fire then rebuilt in a grander scale. Following Lever's death in 1925 the house and gardens were purchased by John Magee. After Magee's death in 1939 the site was acquired by Liverpool Corporation and in 1948 the bungalow and three entrance lodges were demolished and the gardens became open to the public. In 1974 the site passed to the North West Water Authority following local government reorganisation.

The Lever Bridge is listed at Grade II for the following principal reasons:
* Architect: this building is a good example of the landscape design work of Thomas Mawson;
* Group value: it is one of a number of features that not only complement each other but are integral components of the designated garden.