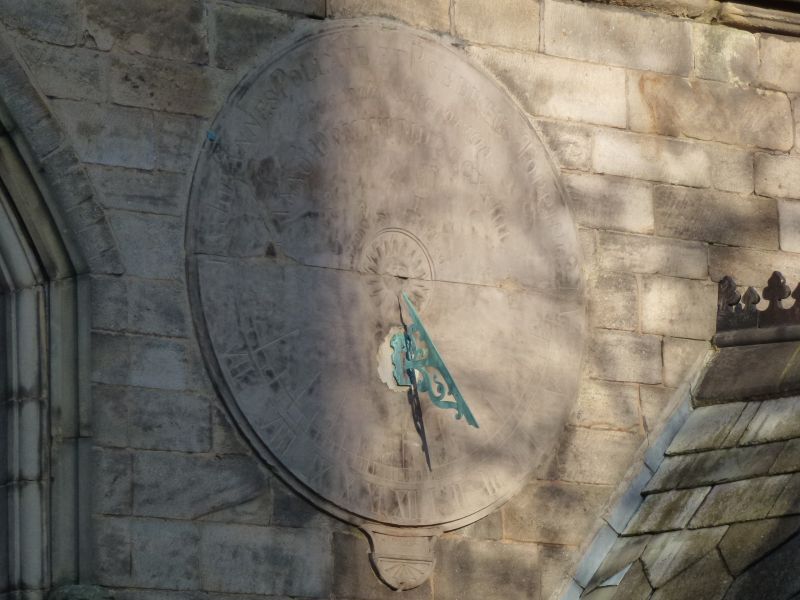 Church, substantially 1859-61 and 1913-14 in Perpendicular style, with
late medieval tower. Stone with slate roofs. West tower, nave with north
and south aisles under separate roofs of equal height, chancel and
separately roofed chapel with a transept. Battlemented tower of 3 stages
has diagonal west buttresses each with 3 carved boars heads at 1st stage
and cusped niche at 2nd stage; between these buttresses on 1st floor
dripmould with various figured bosses in the casement (3 faces, 2 animal
heads, flowers), a west doorway (probably C20) and a C19 4-light west
window with curvilinear tracery and a rose in the head; 3rd stage has an
arched 2-light belfry louvre with hoodmould in each side, above which the
north and south sides have prominent gargoyles; slightly-projecting stair
turret on south side. Old sanctus bellcote. North and south aisles are
buttressed and battlemented with prominent gargoyles; north aisle has
large arched west window with 5 trefoil-headed lights with intersecting
and Perpendicular tracery in the head, a gabled north doorway with
heavily moulded multifoil arch, and in the 4th bay a prominent canted bay,
battlemented with buttresses terminating in tall crocketed pinnacles;
south aisle has a 4-light west window, and in the 1st bay a gabled entrance
porch with moulded arch, a gable parapet pierced by quatrefoils, and a
foliated apex finial. On nave wall over porch is large round sundial with
the upper half lettered parallel with the circumference: