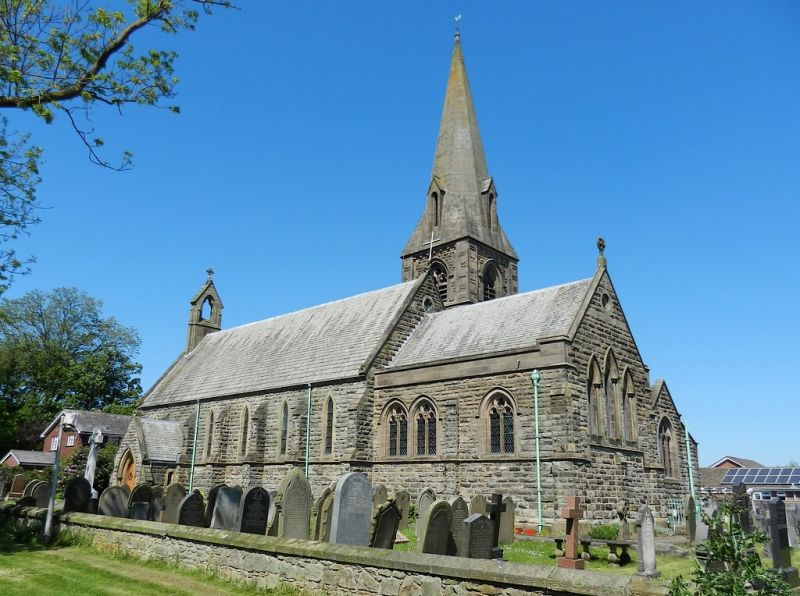 Church, 1848 by J.E. Gregan, with chancel and tower added in 1925 by Austin
and Paley. Original church of squared rock-faced limestone with sandstone
dressings and slate roof; additions mainly in sandstone. Comprises a nave,
lower chancel, south porch, and a north transept with a tower to its west.
West wall of 2 bays, having buttresses with offsets and lancet windows
with angle shafts. Above is a wheel window with shafts as spokes and a
bellcote with trefoiled opening and cross finial. The south-western
buttress contains a flue which terminates in a louvre with gablets and
lancet openings. The south nave wall is of 4 bays to the east of the porch
and has chamfered lancets separated by buttresses. To the west of the porch
is a double lancet window. On the north side are 5 nave bays. The tower is
of 3 stages with diagonal buttresses, broached to a spire. The bell openings
are of 2 trefoiled lights under a pointed head with trefoil. The spire has
gablets on 4 sides with lancet openings. The 3 south chancel windows are
similar to the bell openings. The east window has 3 stepped lancets with
angle shafts. Interior. The nave has 5 roof trusses, carried on corbels and
with arch-braced collars and short king posts. The chancel has a barrel roof
with one king-post truss with raised tie beam. The chancel arch is chamfered
in 2 orders, with moulded imposts and semi-octagonal responds. The east
window has moulded pointed inner arches and attached shafts.