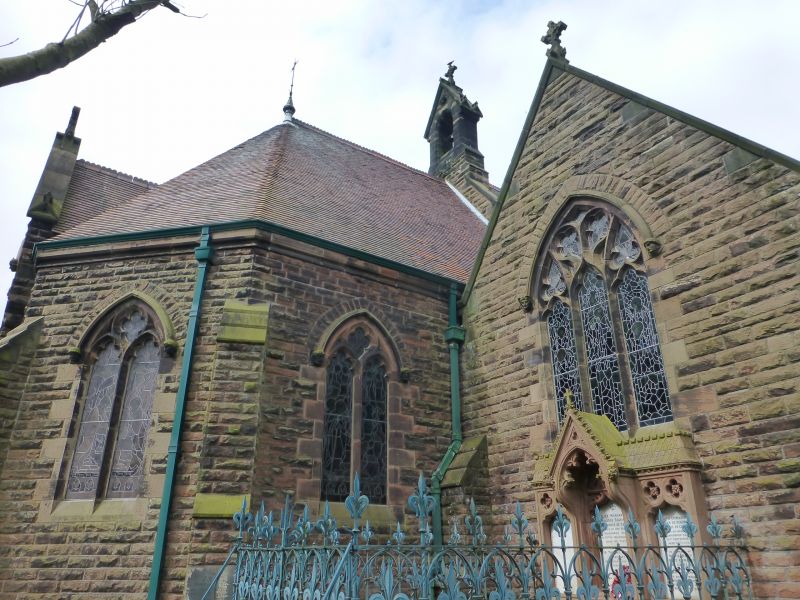 Roman Catholic church. 1888, by Pugin and Pugin. Rock-faced red
sandstone, red tiled roof. Nave on north-south axis, with east aisle,
south-east chapel, apse, north-east tower and north-west baptistery.
Decorated style. North gable end, with tower to left and baptistery to
right, and angle buttresses, has at the right-hand end of the gable of the
nave a 2-centred arched doorway with recessed door and hoodmould with
foliated stop, linked to a dripband carried over 3 cusped lancets at ground
floor, above which is a carved panel with Gothic lettering "Sancta
Elizabetha Ecclesia 1888"; above this, a large traceried 4-light window
under a hoodmould with figured stops, a gable dripband, and a traceried
gable eye. The tower has a doorway like the other but with figured stops,
a window above with 2 cusped lights, above this 2 cusped lancets, then a
tall belfry window of 2 louvred cinquefoil lights with a quatrefoil in the
head, a Lombard frieze between the buttresses, and a pyramidal roof swept
over bracketed eaves. Except for the door, the other sides of the tower
match this. On the east side the buttressed 4-bay aisle has square-headed
windows of 1, 3, 3 and 2 cusped lights, and the nave has gablets containing
wide arched traceried windows; at the south end of the aisle is a square
porch and the chapel with parallel pitched roof and windows like those in
the aisle, and at the south gable of this a memorial to Eliza Margaret De
Biaudos Scarisbrick, Marchioness de Casteja (d.1878), with a carved
tripartite canopy and momumental slab enclosed by fleur-de-lys iron
railings. The apse is 5-sided, with a window of 2 cinquefoil lights in
each side, that in the centre raised into a gablet, and all under
hoodmoulds with figured stops. The west side has tall 2-light windows with
mouchette tracery, at the north end a 5-sided baptistery with cusped
lancets, and at the south end a large gabled sacristy. Interior: gallery at
north end, over wide depressed arches forming an interior porch or narthex;
aisle arcade of moulded arches on octagonal columns; arch-braced roof with
Y-struts to principal rafters; arch-braced santuary roof with stencilled
panels; chapel divided into 2 equal bays by a moulded stone arch, the
ceiling painted blue with stencilled gold stars; on west side of nave
a large elaborately carved wooden pulpit on a carved pedestal and
approached by stairs also elaborately carved, probably Belgian, mid- to
later C17 (Pevsner).