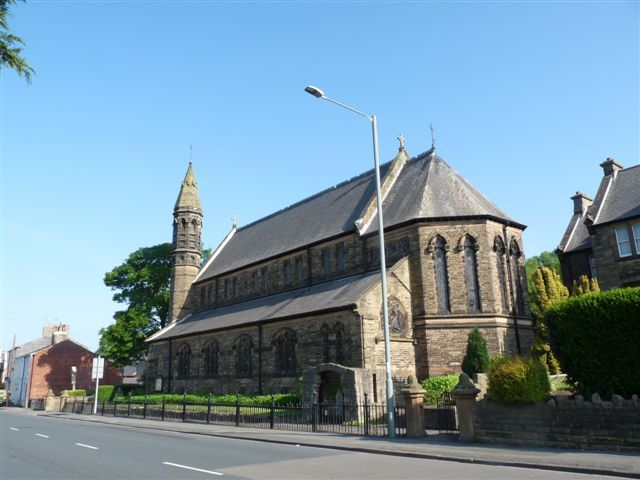 5/127 Roman Catholic Church of
- Our Lady and St. Patrick

Church, 1880, by Pugin and Pugin. Nave with aisles, 3-sided apsidal
chancel, south west stair turret with spire, and attached baptistry on
north side. Rockfaced stone, slate roof. Four windows to south aisle, 3
to north aisle, all of 3-lights under a pointed Tudor arch, with trefoils
in the heads, and stilted hoodmoulds which have cubic stops; clerestory of
2 cusped single lights in each bay. Octagonal stair turret at south west
corner, terminating in a belfry with a short spire. West end has doorway
with gabled arch, and a round window crossed diagonally by 2 pairs of bars
intersecting at right angles, with cinquefoils in the outer angles. Gabled
baptistry at west end of north aisle. Interior: 4-bay nave arcade composed
of columns with splayed heads and moulded octagonal capitals, with matching
responds, supporting 2-centred arches with hoodmoulds which have in the
springing tapered panels, each carved with a different naturalistic leaf
pattern; very high chancel arch which has slim inner shafts terminating in
naturalistic foliated capitals, and similar outer shafts continued over
the head as a hoodmould. Elaborately carved reredos with pinnacled and
crocketed canopies to main altar and both side altars; communion rail of
coloured marble pierced by 2 rows of quatrefoils. Scissor-braced roof.