A Grade I Listed Building in Twycross, Leicestershire 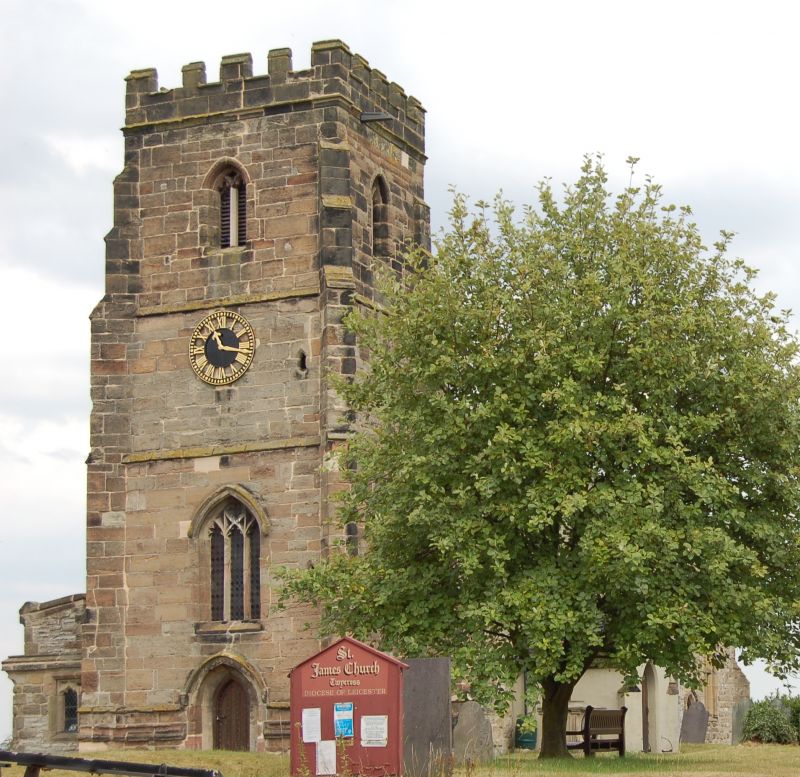 Parish church. Early C14 with C15 west tower and clerestorey; restored
1840. West tower, 5-bay nave and chancel in one with north aisle,
south porch and north-west vestry. West tower: 3 stages with offsets,
diagonal buttresses, hollow chamfered parapet string and crenellated
parapet. Pointed west door with roll-moulded edge to a hollowed
surround, and a hood mould terminating in heads. Directly above is a
2-centred window with 3 cinquefoil-headed lights and Perpendicular
tracery, and a hood-mould terminating in heads. The belfry openings
each have 2 trefoil-headed lights and a quatrefoil in the central
spandrel.
The nave has a C19 gabled south porch with rendered walls, diagonal
buttresses, and a pointed doorway. The westernmost window on this side
is pointed and contains Y-tracery, the next window is also pointed and
has 3 cinquefoil-headed lights, but the two chancel windows are
square-headed and transomed and each has 2 ogee trefoil-headed lights
and the beginnings of reticulated tracery (c.f. Church of St. Edith,
Orton-on-the-Hill, Twycross c.p.). These two bays are built of coursed
rubble as opposed to the large dressed freestone blocks of the nave,
though the upper courses are of the latter material demonstrating that
the chancel is stratigraphically earlier than the rest of the
building. Between the two chancel windows is a pointed door with
chamfered surround, and hood mould ending in carved heads. Plain
parapet with hollow moulded string and a gargoyle above the priest's
door. The east window of the north aisle has 3 trefoil-headed lights
and reticulated tracery, and a hood-mould without stops. All the
windows of the north side have square heads and the beginnings of
reticulated tracery. 4 square-headed clerestorey windows, each of 2
trefoil-headed lights with sunken spandrels. Blocked north door with
pointed arch, ogee-moulded surround and hood mould. The Vestry is in
the angle between the tower and aisle. It has 2-light windows like
those on the north side and a C19 pointed door. Interior: No
structural division between nave and chancel. 5-bay arcade of tall
pointed arches on slender columns without capitals, but a continuously
moulded surround of ogee section. Between the chancel and the eastern
bay of the north aisle, which appears to have been a chapel, is a
4-centred archway with similar mouldings to those of the nave arcade.
C19 nave and chancel roof with arch-braced tie beams springing from
wooden corbels to form 4-centred arches. On the soffit of each tie
beam is a carved boss. Lean-to aisle roof, probably C19. In the south
wall of the nave at first floor level is a doorway which communicated
with a former rood loft. Fixtures and fittings: C18/early C19 west
gallery carried on Tuscan columns. It holds contemporary benches and
extends over the west end of the north aisle. A staircase with column
on vase balusters ascends to it from the nave. The front of the
gallery bears a royal coat of arms of 1840. C14 octagonal font with
trefoil-headed panels around the pedestal and quatrefoil panels around
the basin. The Howe family box pews occupy the east bay of the north
aisle; an attached brass plate commemorates the reopening of the church
in 1840 after repairs and enlargement undertaken at the expense of
Earl Howe. Stained glass: The east window was presented to the church
by Sir Walter Waller in 1840. In the centre light the panel showing
the Presentation in the Temple was originally in the Lady Chapel of
St. Denis, near Paris (c. 1145). Below it are Christ taken down from
the Cross and the spies carrying the grapes on their return from the
promised land; both are from the Sainte-Chapelle in Paris of 1243-8.
More glass from Sainte-Chapelle is to be found in the lower panels of
the flanking lights. To the north, the People before Moses, and below
it St. John; the latter originally formed one scene with the bottom
panel of the southern light which depicts the Emperor Domitian or
possibly the High Priest Aristodemus.
Above this panel, Moses and the Ten Commandments, which may have made
one scene with its counterpart to the north (the People before Moses)
described above. Also on the south side, a kneeling woman, probably
from the choir of Le Mans Cathedral, dedicated 1354, and some C14 or
C15 glass at the top. The upper panels of the northern light contain
C12 or early C13 glass and include a saint and a woman, possibly from
St. Julien de Sault. In the east bay of the north aisle is a window of
1840 by T. Willement depicting the royal coat of arms of William IV,
and there is some more contemporary heradic glass in one of the south
windows, of the nave. B.O.E. pp.413-4.