A Grade I Listed Building in Barwell, Leicestershire 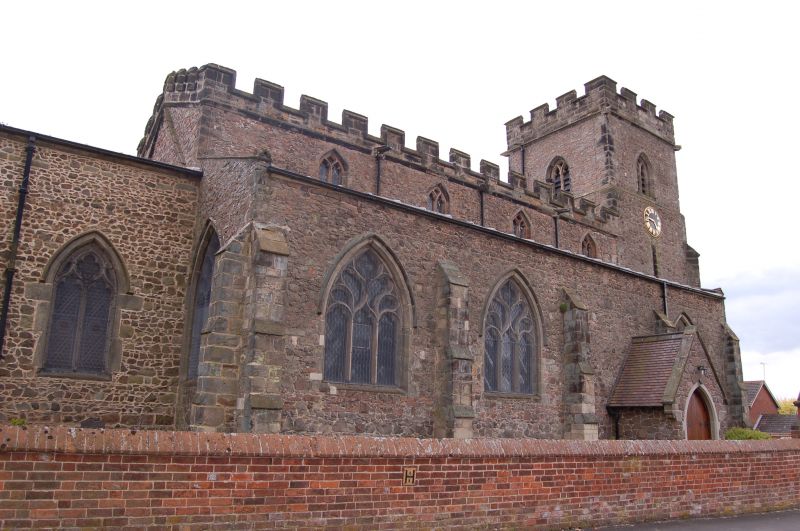 Parish church. Circa 1300-50 with late C15 clerestory; restored 1854
by H. Goddard. Random rubble with freestone dressings; lead covered
roofs of low pitch. West tower, 4-bay nave with aisles and north and
south porches, 3-bay chancel. The 3-stage west tower has a series of
offsets, a moulded plinth and a crenellated parapet with gargoyles at
the four corners. The lower stage has angle buttresses surmounted by
small diagonal buttresses which extend to a little over half the height
of the second stage. Y-traceried west window, rectangular loops to the
second stage and Y-traceried belfry lights, the heads of the two
sub-divisions having trefoil cusping. Nave and aisles: Shallow
buttresses at the bay divisions with offsets. The pointed windows of
western bay are of 3 stepped lights; otherwise, the windows have 3
trefoiled lights and flowing tracery. Late C15 battlemented clerestory
with hollow chamfered parapet string and continuous moulded coping
around the merlons and crenels; each window has 2 trefoil-headed lights
beneath a tall 4-centred arch, and a hollow chamfered surround. On the
north and south sides are a pair of C19 gabled porches. The pointed
north door of the church has a moulded surround including convex
quarter-round, concave half-round and ogee profiles. Chancel: 2-light
windows with reticulated (west and central bays) and flowing (east bay)
tracery; ambitious 5-light east window with flowing tracery in an
inventive pattern, possibly interfered with in the C19. Interior:
4-bay nave arcades of double chamfered pointed arches on octagonal
columns with moulded bases and capitals; the arches have continuous
hood moulds. The chancel arch is similar but springs from engaged half
columns; the tower arch has 3 chamfered orders and no capitals. At the
east end of the south aisle a tall double chamfered arch gives access
to what is now the vestry, though it may have served as a chapel
originally. Low pitched C15 nave roof carried on cambered tie beams,
brattished along the top and supported by shafted brackets which stand
on stone corbels carved as heads. On the soffit of each tie beam is a
carved boss (c.f. Church of Margaret, Stoke Golding C.P.; Church of St.
Peter, Witherley C.P.). Lean-to aisle roofs of similar date, also with
curved bosses; the tie beams of the north aisle roof are supported on
brackets, to the north which spring from stone corbels curved with
naturalistic foilage. C19 chancel roof of similar type to that over
the nave. Fixtures and fittings: plain cylindrical font, probably
medieval. Raked Sunday school seating of 1854 in north aisle. C19
pine pews. In the south-east corner of the north aisle is a C20
ogee-headed doorway giving access to a newel stair which originally
ascended to the rood loft. Altar, reredos, altar rail, choir stalls
and pulpit are all of one period and style; late C19/C20 with
trefoil-headed panelling, naturalistic foilage and poppy-heads. C14
Easter sepulchre with segmental pointed arch, and sedilia and piscina
with 2-centred drop arches and a continuous hood mould. Commandment
boards to each side of the east window.

Monuments: John Turkeray,died 1613; aedicule with a mixture of
Renaissance and Gothic detail; 2 Tuscan columns and an open pediment
surmounted by 3 obelisks; the panel inside is trefoil-headed with
pendant cusps and contains a brass plate depicting Turkeray, who was
parish priest, preaching in a pulpit to his assembled wife and
children. Richard Brereton, died 1659; brass plate with the engraved
figures of Brereton and his wife standing with their sons and daughters
behind the respective parents. At the back of the Easter sepulchre is
a brass plate to Susanna Stafford, died 1676, and one to Mary Seagrave,
died 1730. B.O.E. p. 93.