Church of Saints Peter and Paul

A Grade I Listed Building in Syston, Leicestershire 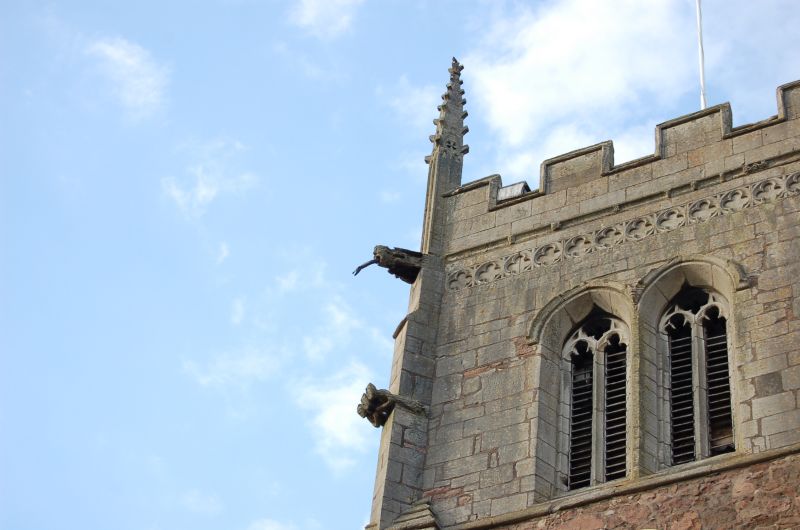 Parish church, partially C13, with early C14 and Perpendicular work, and
externally substantially as restored by Ordish, c1870-80. Pink granite rubble
with white limestone dressings. West Tower, nave with clerestory and two
aisles, and chancel. Buttressed tower is Perpendicular, four stages with
west doorway in roll-moulded and hollow chamfered ogee archway with outer
squared hood mould on large and worn corbel heads, with quatrefoils etc.,
in the spandrels. The door itself is C19 with blank traceried patterns.
Large 3-light geometric traceried light above. Two-tiered paired lights
to bell chamber. Upper stage is of white ashlar. Quatrefoil frieze below
embattled parapet with slender angle pinnacles. South aisle is the work
of Ordish, but porch is C14; a shallow coped gable, and buttresses with
moulded archway springing from a chamfer with a niche over it. Two tiny
windows in its east and west walls with stained glass. The fenestration
of the aisle is a heavy geometric style with pointed arched stilted hood
moulds, with corbels. Ogee arched doorway to east. Ashlar parapet with masks
etc. Tomb recess in south wall; moulded arch with inner ogee, early C14.
Clerestory is Perpendicular with embattled parapet and grotesque gargoyles
on pilasters between the windows. The Chancel is of c1870-80. It has a 5-light
tiered east window with statue in niche above. Quatrefoil freize to north
and pilasters. One pinnacle, and a larger pinnacle marking its eastern end
with mutilated fleurons. North aisle details similar to those of south.