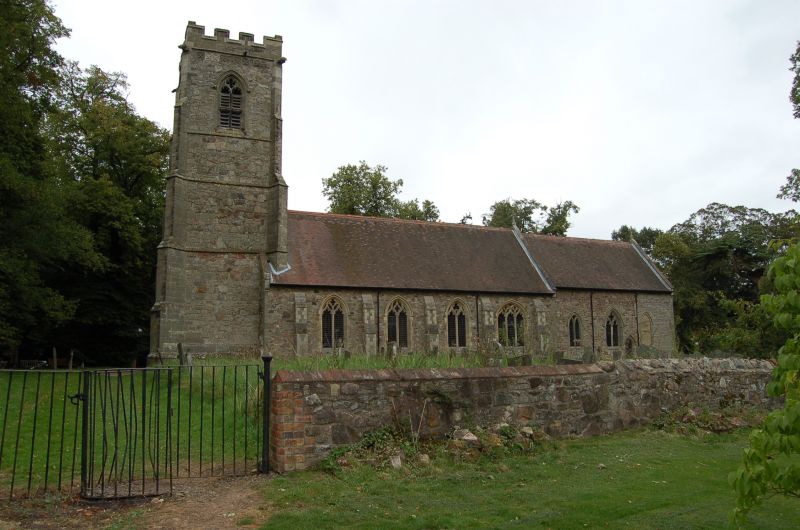 Medieval parish church largely rebuilt 1890 by Sir A. Blomfield. Mainly of
random rubble with ashlar dressings but with some coursed rubble walling to
S wall of chancel. Late C14 buttressed west tower with 4 principal stages,
2-light traceried openings to bell chamber, west door and 2-light traceried
window above, with corbel heads to hoodmould, decorated frieze below embattled
parapet. Nave of 4 bays, all of 1890, random rubble with sandstone dressings,
curvilinear tracery to windows, that to SE having a stilted arch. Chancel
retains much medieval masonry, showing 2 builds in S wall, and a 2-light
reticulated traceried window with shafts, and a blocked wide lancet window.
1 Victorian Y-tracery lancet, and S door and east wall and window of 1890.

Interior very plain and all of 1890 but there is a fine collection of memorials
of the Packe family and their predecessors, in the Chancel, including two
late C15 alabaster tomb chests with bedesmen and angels. One has an incised
slab commemorating Sir Richard Nele and Isabel his wife, 1476, the other
has 2 recumbent unknown female figures. Wall tomb to Sir William Skipwith
and Jane his wife, 1631, a large recessed monument in various marbles, a
double tomb within aedicule, the 2 recumbent figures lie on different levels,
ornate, mannerist style. Monument to Christopher Packe of Cotes, d1682
the 1st Packe to acquire the hall, in 1653, a semi-reclining figure on a
tomb chest with inscription, pediment etc. above, in Baroque style. Charles
Hussey Packe, d1842 aged 15, a marble recumbent child figure by Westmacott
jr., and various other memorials by noted C18 and C19 sculptors.

The Church is of interest for being almost the sole reminder of the medieval
village of Prestwold, destroyed in the enclosure of the estate and it is noteworthy
that a previous restoration of 1743 had provided the Church with a nave in
the classical style, with round headed windows, oculi and a south door in
architrave. Photographs of this building survive in the Church, showing
also the high pews, gallery and double decker pulpit, but no traces of any
of this survive in the fabric.