Church of St Michael and All Saints 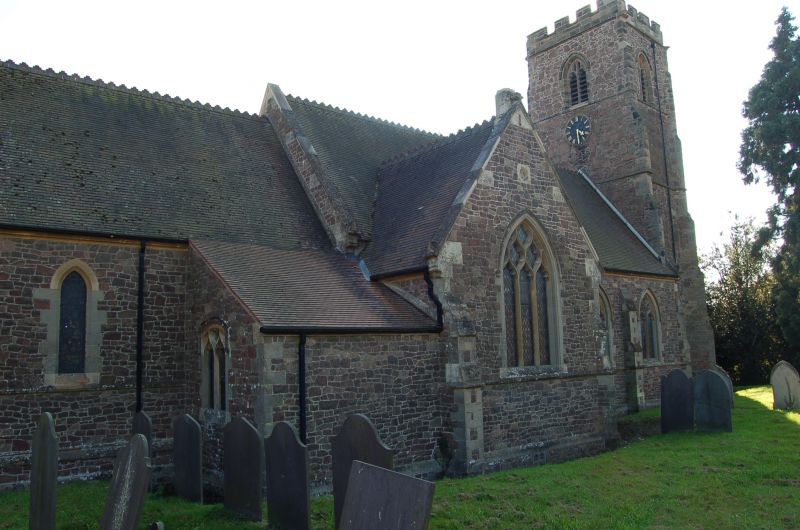 Entry Name: Church of St Michael and All Saints

Parish church. West tower late C14, the remainder built in 1879
to the designs of William Smith in Decorated style. Random
granite rubble with ashlar dressings and plain tile roofs,
chamfered plinth and coved eaves, moulded sill band and coped
gable with gabled kneelers. West tower, nave, north and south
transepts, vestry, chancel, south porch. West tower, 3 stages,
has chamfered plinth, moulded band, 2 string courses, coved eaves
band with gargoyles, crenellated parapet. 2 diagonal buttresses
to west, 2 side buttresses to east, all with setoffs. First
stage has to west, ogee double lancet with panel tracery and hood
mould with mask stops. Second stage has a quatrefoil light to
west and south, and to south and east, a clock. Third stage has
on each side a cusped double lancet louvred bell opening with
hood mould. Nave, south side, has to east, 2 double lancets, and
buttressed north side has 3 lancets all with Decorated tracery
and hood moulds. North and south transepts have buttressed
gables, each with a Decorated triple lancet with hood mould.
North transept west side has a re-set Cll round headed window.
Lean-to vestry has a double lancet with a segmental head.
Chancel, 2 bays, has buttressed east end with a triple lancet
with hood mould and mask stops. North side has an off-centre
plain single lancet. South side has a central buttress and to
its left, a doorway with moulded head and single shafts. At a
higher level, flanking the buttress, 2 double lancets with hood
moulds and mask stops. Gabled south porch has a moulded doorway
with shafts and hood mould with mask stops, flanked by single
buttresses. In each side, a single lancet. Interior has stone
benches and arch braced roof. Fillet moulded doorway with shafts
and hood mould with mask stops, and a pair of half glazed doors.
Double chamfered and rebated tower arch, C14, has moulded
octagonal imposts. Nave, transepts and chancel have moulded sill
bands, moulded window openings with shafts, and arch braced roofs
with collars and spine beams. Transepts have chamfered and
fillet moulded arches with octagonal responds. North transept
has a traceried panelled wooden screen, and to east a segmental
pointed arch to the organ chamber, with a panelled screen, 1934.
Chancel has a chamfered and fillet moulded arch with hood mould
and mask stops, octagonal responds and round minor shafts all
with foliate corbels. North side has a pointed arch to the organ
chamber. East end has an alabaster C14 style reredos with
crocketed gabled niches and finials and mosaic figure panels,
flanked by C13 style blind arcades. East window has stained
glass. South side has to east a cusped combined piscina and
aumbry, and a cusped double sedilia in the eastern window. The 3
side windows have stained glass dated 1899. Fittings include a
notable C11 font in the form of a square capital with large
upright leaves, on a round stem. Wooden cover with arched
handles, 1940. C19 framed and traceried stalls and desks, plain
benches, traceried octagonal pulpit and brass lectern. Oil
painting in heavy gilt frame, after Raphael, 1942. Memorials
include marble and slate tablet, 1847, and pedimented oak war
memorial board.