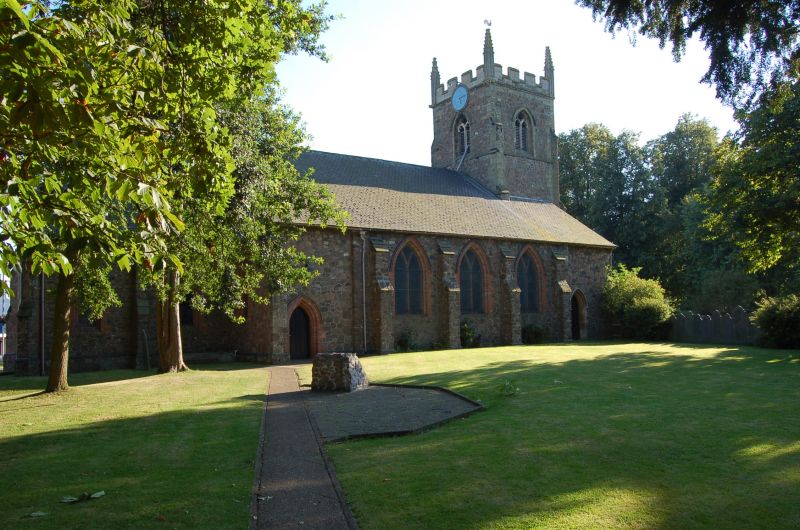 Parish Church. Tower of C15, the rest of 1841 by H. Goddard. Interior
remodelled in 1907 by T.P. Brown. Random granite rubble with limestone
dressings and Welsh slate roofs. West tower, nave with two aisles, chancel.
Tower has angle buttresses and paired foiled lights to bell chamber.
Embattled parapet with angle pinnacles with fleurons above corbels. In the
plinth of the west wall a door has been cut through, with a Perpendicular
three light window above it. Coped gabled south porch, buttressed south aisle
which has lancet windows. Nave and aisles roofed in a single span. Lancet
windows in chancel but a three light Decorated style east window. Lancet and
wide traceried lights to north, and vestry. Inside, the rubble walls are
exposed throughout, and the triple chamfered tower arch looks early C14, above
it a former roof profile is apparently visible. The three bay arcades are of
brick, flat arches with minimal abaci to square pillars. Roof springs from
corbels, the tie beams surmounted by king struts. Chancel arch also brick,
in the same minimal style as the nave arcades, with a low relief brick cross
ahove it. Wood panelling and reredos to chancel. Medieval font, octagonal
with plain panels and moulding above the shaft. Arms of George II over the
south doorway. Stained glass; in the east window of the south aisle, by
Kempe, commemorating St. Andrew. Undated glass in chancel east window
predominantly blue and red, depicting the Crucifixion.