A Grade I Listed Building in Birmingham, Birmingham 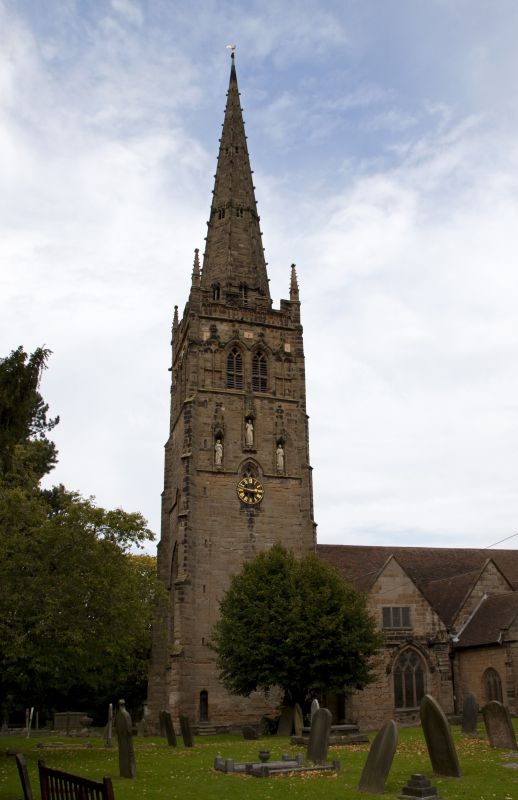 THE GREEN
1.
5104
(north-west side)
Kings Norton B38
Church of St Nicholas
SP 0478 NE 58/1 25.4.52
I
2.
Substantial medieval church of sandstone with nave, aisles, chancel and west tower
with spire, south porch. Norman origin but predominantly late C13 and C14. Major
feature of C15 west tower and spire with contemporary south porch, gabled clerestory
a C17 addition chancel restored with considerable reconstruction by Ewan Christian
C1863. North aisle rebuilt with the old materials and vestry added to north west
end in the restoration of 1872 by W J Hopkins. The chancel retains 2 reset C12
round arched windows in the north wall, and was probably rebuilt in the early C13
with a further rebuild in the C14. Major rebuilding commenced late C13 with the 7
bay north aisle arcade, the south aisle arcade being early C14 - octagonal and
quatrefoil clustered shaft piers, but one circular. Arches of 2 chamfered orders.
C14 chancel arch of 2 orders with ball flower ornament to inner one, south aisle
windows with hood moulds C14: north aisle windows altered in 1872 restoration. The
tower and spires of the C15: 4 stages, the belfry arcade to each face with 4 2-light
mullioned-transomed windows, outer ones blind, all with crocketted gabled drip moulds
with finials. Crenellated parapet with corner pinnacles, the graceful octagonal
spire rising above in 3 stages, the south porch also C15 with remains of a crocketed
image bracket above the doorway in the gable. Inside the porch the carved corner
corbels indicate the original intention to vault in stone. In C1659 (dated beam)
the 3 gables containing the south clerestory were added, those to the north removed
in the rebuilding of the north aisle of 1872. Good C16 and C17 monuments mostly
grouped under the tower, noteworthy for its strapwork the alabaster altar-tomb with
recumbent effigies of Sir Richard Grevis and 1632 and his wife. The church holds a
commanding position on a hillock set in a churchyard on the north side of the
green. The tower is a landmark.