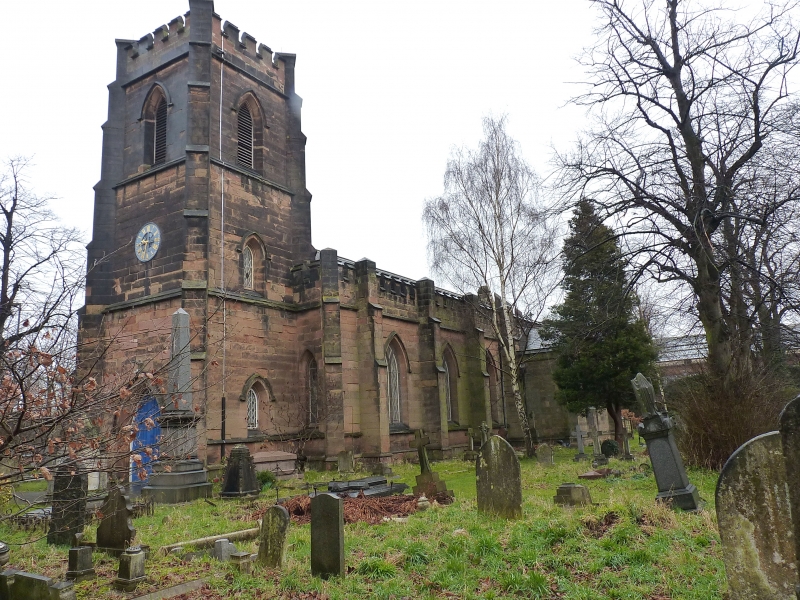 GV II
An Anglican parish church in Gothic style, built 1831-3 by Robert Studholme of Sutton Coldfield, enlarged by the addition of the chancel, organ chamber and vestries in 1888 by J A Chatwin; the transepts were added by Chatwin in 1894.

MATERIALS: The church is built from red sandstone, with plastered and painted interior. The roofs are of plain clay tile.

PLAN: The church is orientated north east-south west, but ritual compass points are used throughout this report. The cruciform plan has west tower, aisleless nave, chancel, north and south transepts, and an organ chamber and vestries to the north and south of the chancel.

EXTERIOR: The three-bay nave has buttresses with offsets reflecting the bay structure. The nave has a crenellated parapet, and single lancet windows with Y-tracery, diamond panes and margin lights under drip moulds. The west tower has three stages. The main entrance is in the west side of the tower, a pointed-arched doorway with drip mould housing plain double doors. The windows of the tower are single lancets with diamond panes and margin glazing. The bell-stage has lancet louvers, and the top of the tower has a crenellated parapet matching the nave. The gabled transepts have diagonal buttresses, a moulded eaves course and raised copings. The chancel, set slightly below the level of the nave roof, has diagonal buttresses, a dentil eaves course and pointed-arched windows with drip moulds. The organ chamber is similar. The windows to the transepts and chancel have Decorated stone tracery; those to the transepts have four lights with cusped heads and trefoils above. The east window has three lights with cusped heads and cinquefoils and a quatrefoil above. The lean-to vestries have tripartite windows with Caernarvon-arched heads, and a small east doorway with a similar head.

INTERIOR: The interior is plastered and painted white, with the exception of the exposed timber roof, which has scissor bracing. A canted, late-C19 storm porch in half-glazed timber is set under the tower. The half-spherical alabaster font, raised on a base of clustered columns with foliate capitals, is situated in the south-west corner of the nave. The hexagonal timber pulpit sits at the foot of the pointed and moulded chancel arch, on its north side. The transept arches are segmental, with double mouldings. The north transept houses the Lady Chapel, separated from the body of the church by a glazed and carved pierced timber screen. The chapel has a carved timber altar and altar back, above which is a large wall-painting of the 1930s depicting the Virgin and Child, with a landscape background incorporating Lichfield Cathedral and a zig-zag bridge, a local landmark. The stained glass window depicting the Nativity was designed by Pearce and Cutler, and installed in 1938. The south transept has another chapel, with a screen to the vestry to its east. The stained glass window depicting the Epiphany is by Hardman and Co. The chancel arch has a drip mould with head stops. The moulded impost terminates in polygonal corbels with angel stops. The chancel has pointed-arched windows and doors, all with drip moulds and head stops. The east window depicts the Crucifixion. The altar and altar back are of carved timber. A small doorway to the north gives access to the organ chamber via a canted lobby, into which is set a stained glass window by Thomas William Camm, depicting the young St John. There are several classical memorial tablets of the mid-C19, and an elaborate Gothic tabernacle memorial to John Gough, the benefactor of the church.

HISTORY: St John the Evangelist was built in 1831-3 as a chapel of ease, funded by John Gough who owned the Perry Hall estate; it was intended for use by the workers on the estate. The building was designed and erected by an architect-stonemason, Robert Studholme of Sutton Coldfield (1786-1836). Built in Commissioners' Gothic style, the original church consisted of a simple, rectangular space with a west gallery, and a west tower. The Chapel of St John was consecrated by the Bishop of Lichfield on 6 August 1833. A new parish of St John was created out of the parish of St Mary, Handsworth, in 1862. The population of the area grew steadily through the remainder of the C19, as Birmingham, 3 miles from the village of Perry Barr when the chapel was built, gradually expanded into new suburbs. In 1888, the church was enlarged by the addition of an elevated chancel, north organ chamber and south vestries, designed by Julius Alfred Chatwin (1830-1907). The transepts were added by Chatwin in 1894. Stained glass was installed in the church in the later C19, including a small window depicting the young St John, by Thomas William Camm of Smethwick; windows by Pearce and Cutler and Hardman & Co were added to the transept chapels in the earlier C20. At the same time, an unusual mural was painted in the Lady Chapel. In the 1970s, the elaborate crocketed pinnacles to the nave and tower were removed on health and safety grounds.

REASONS FOR DESIGNATION:
The Anglican church of St John the Evangelist, Perry Barr, is designated at Grade II, for the following principal reasons:
* The church originated in the 1830s as a chapel of ease for workers on the Perry Hall estate, and was endowed by John Gough, the owner of Perry Hall
* The original church, designed and built by Robert Studholme, a local builder, was of good quality, and shows the influence of Commissioners' Churches being built in the first half of the C19
* The additions of 1888 and 1894 by J A Chatwin complement the earlier building and create a coherent space reflecting the liturgical needs of the period
* Good quality stained glass of the later C19 and earlier C20 enhance the otherwise plain interior
* Group value with the church's boundary walls, piers and gates, separately listed at Grade II