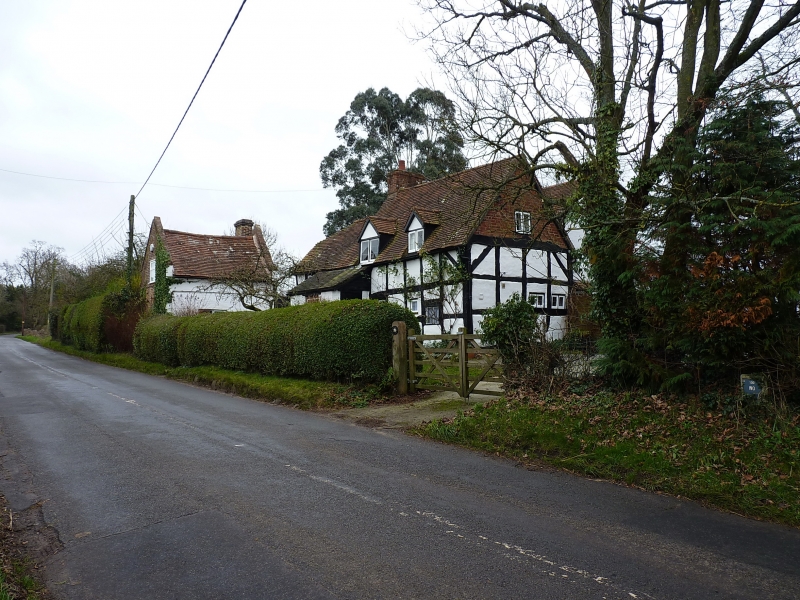 House. C16 or early C17. Timber-framed with rendered infill and a plain-tiled roof. Single-storey with attic.

FACADE: The road front has cells of small framing with angle braces. There is random fenestration to the ground floor and a projecting C20 lean-to porch at left. There are 2 gable dormer casements to the attic and a cross-axial stack to the ridge. The roof is gabled at right and half-hipped to the left where its ridge is lower. The right gable end has 4X3 cells of small-framing with angle braces and has two replaced casements to ground floor level. the gable is of exposed C19 brick.

INTERIOR; There are ceiling beams with end stops and heavy rafters to the ground floor. The dividing walls at attic level have angle struts and heavy, cambered ties supporting queen struts. The wall plate to the ground floor is also heavy. An Edwardian staircase with ramped handrail and spiral-twist balusters was inserted in the later C20. As a substantially intact early example of a timber-framed vernacular building retaining much of its internal architectural detailing, it fully merits listing. Although the later C20 extension has caused some loss of fabric, this has been limited and the position of the extension, to the rear of the original cottage, does not significnatly detract from its special interest.