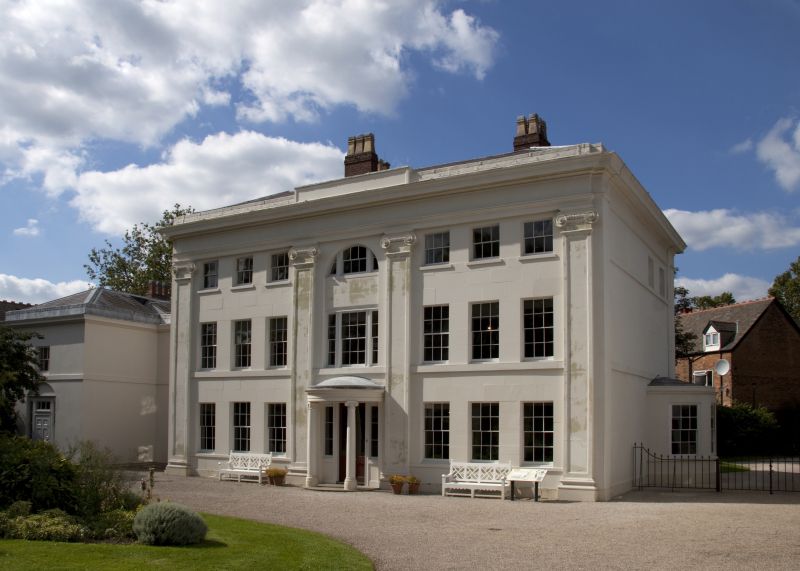 The enlargement over a long period of an unfinished mid C18 house acquired
in 1766 by Matthew Boulton, whose home this was from 1766 to 1809. In 1789
Samuel and then in 1796 James Wyatt, was being employed. The principal
front (now the garden facade) probably attributable to James Wyatt. Faced
with painted slate in imitation of ashlar work. Two storeys plus attics;
7 bays with giant panelled Ionic pilasters left and right and either side
of the centre bay. Ground floor with central semi-circular porch on Ionic
columns and 6 windows. First floor with a central tripartite window on
a sill band and an attic semi-circular tripartite window both within a
tall arch and 6 first floor windows on a sill band and 6 almost square
attic windows. All windows sashes with glazing bars. Entablature, moulded
cornice and blocking course. Left and right, modern additions. Entrance
hall with scagliola columns and, in the back wall, double doors flanked
by niches. The doors lead into a room with 3 narrow transverse groin vaulted
bays running from mock scagliola iron columns either side of recesses flanking
the fireplace on the left to thin pilasters on the right; the entrance
wall is bowed to match the shallow bow window at the far end of the room.
The groin vaults, which are plastered, are probably carried on an iron frame
or architrave.