A Grade I Listed Building in Newnham, West Northamptonshire 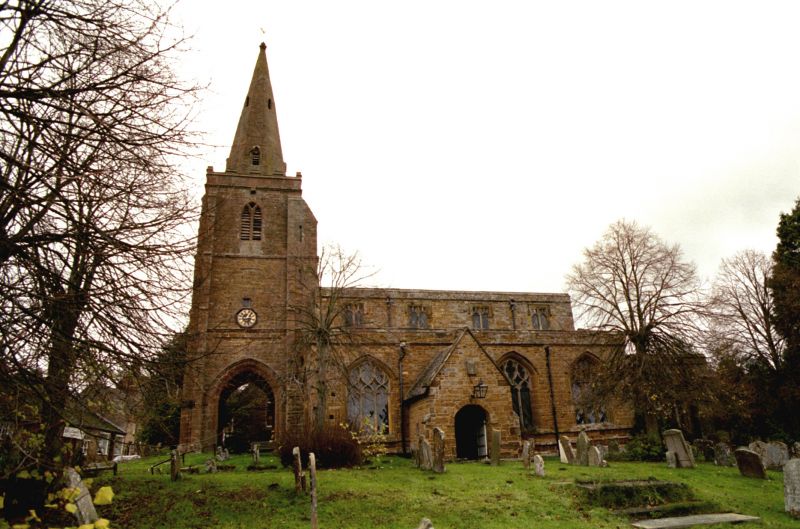 Church of England Parish: Newnham St Michael and All Angels

NEWNHAM,
CHURCH HILL (East side),
Church of St. Michael and All Angels

INTERIOR:
chancel has piscina with cusped head and fine Perpendicular roof with moulded
purlins and ridge. Chancel arch has 2 continuous sunk quadrant mouldings. Nave
has 4-bay arcades; that to north with 2 quatrefoil piers of c.1300 (Pevsner);
easternmost pier and those to south aisle C15 and octagonal with polygonal
responds - north-east respond of angel bearing shield. Double-chamfered arches
to north, hollow chamfered to south. Aisle roofs much renewed; north aisle roof
probably C18. Box pews in aisles and at back of church date from re-pewing of
1826. Early C17 communion table. Commandment, Creed and Lords Prayer Boards.
Communion rails with stick balusters. Royal Arms of Queen Anne over west door j
oil on board. Brass to Letitia Catesby made at time of death of her husband
Robert in 1467 placed on wall above pulpit. Wall monument in chancel of
alabaster to Thomas Thornton d.1632 and C19 marble wall tablets to various
owners of Newnham Hall. A Mr. Hussey, architect, was consulted in 1844 and paid
£5 18s 6d, probably R.C. Hussey and responsible for Decorated tracery in north
and south aisles.