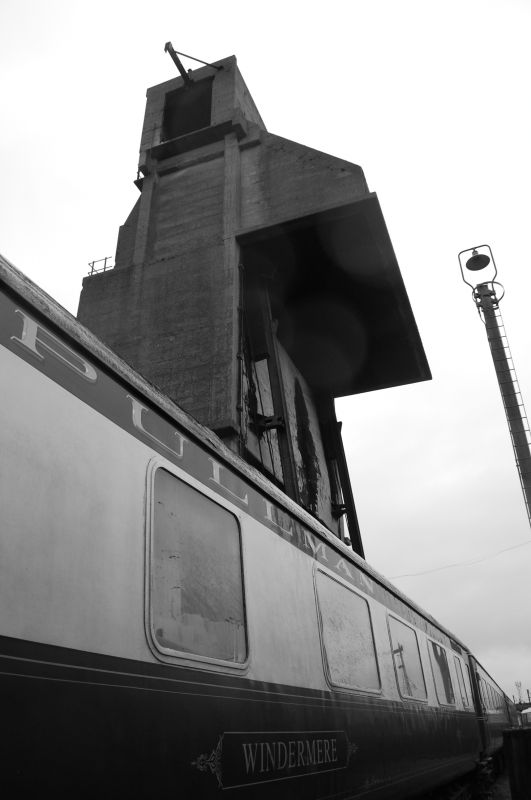 Plant for handling ash produced by steam locomotives: part of the modernised Motive Power Depot built for the London Midland Scottish Railway in 1938-44, being the last British Rail depot closed to steam locomotives in 1968.

DESIGN: the plant is of mass concrete in the form of a tower which spans a standard gauge line. The main body of the tower forms a hopper designed to discharge directly into wagons placed on the line below. The pit for the ash bin is between the tracks on the eastern side of the tower, the bin and the mechanism for raising it up the tower to empty into the hopper still being in situ. The plant's control cabin forms the top of the tower.

In 1846 the first railway station was opened at Carnforth as a simple wayside halt. By 1880 it had become an important junction between the London and North Western Railway's (LNWR) London to Glasgow main line, the Furness Railway to Furness and the joint Furness Midland Railway to Leeds, with all three railway companies having servicing facilities for their locomotives at the junction. With the formation of the London Midland and Scottish Railway (LMS) in 1923, Carnforth passed into single ownership, remaining an important junction and centre for the servicing and stabling of locomotives. In 1938-44 the LMS, which led the way nationally with improving operational efficiency, modernised the depot to conform to their standard depot layout developed in 1933, designed to efficiently service and stable large numbers of steam locomotives.

Commissioned in 1938, built in 1939 and operational by April 1940, the ash plant, along with the associated coaling plant, was a key feature of the modernised Motive Power Depot (MPD). The ash plant was a standard LMS design and was in effect a temporary storage silo for waste ash. Ash would be shovelled by hand from the fireboxes of steam locomotives either directly into the sunken ash bin or into rail mounted tubs. The ash bin would then be electrically winched up and emptied into the over-track hopper of the ash plant which could hold up to 25 tons before it required emptying. Ash was then discharged directly into an open wagon placed on the track which passed underneath the hopper to be taken either to a tip at Heysham Harbour or to be made into building blocks. In contrast, ash handling at servicing depots of other railway companies typically relied on manual labour.

Carnforth was the last MPD in the country to close to steam locomotives in August 1968, finally closing to all British Rail traffic in March 1969. However from December 1968, Carnforth became a base for steam locomotive preservation, developing as Steamtown (a museum and steam locomotive restoration facility) and from the late 1990s forming the base of West Coast Railways which operates private charter trains hauled by both steam and diesel traction. It is not known when the ash plant was last operational. Both the ash and coaling plants have been the basis of models produced by a number of model railway manufacturers.

The ash plant at Carnforth is listed Grade II* for the following principal reasons:
* Technology: the plant represents the peak of technological development for the servicing of steam-driven traction;
* Rarity: thought to be the only steam-age mechanical ash plant retaining its mechanism that survives nationally, also a rare survival internationally;
* Efficiency: the London Midland Scottish Railway led the way nationally in improving operating efficiency and developed an ultra-efficient design for their Motive Power Depots, these representing the peak of development for steam traction, the ash plant being an important, high-tech component of the depot;
* Group value: part of a remarkably complete survival of a steam-age Motive Power Depot.