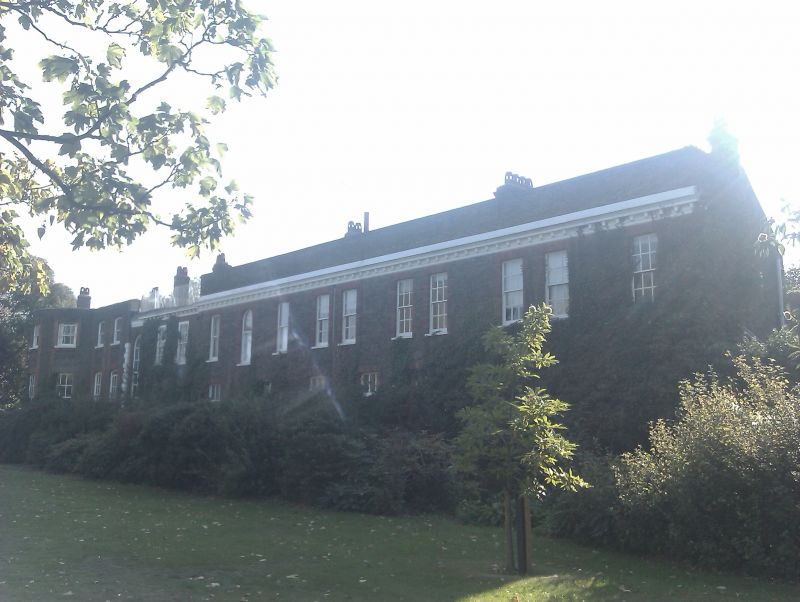 2.
House built in 1694 with many additions in mid C18, early C19 and later. Irregular
plan. 2 and a half storeys (the half is a mezzanine) 6 windows on main West
front. Multicoloured stock brick with red brick dressings and stone coped parapet.
Ground floor and mezzanine blank except for small modern windows inserted on
each floor; sunk panels elsewhere. On 2nd floor recessed sash windows with glazing
bars. Renewed door and fanlight in wood doorcase of sunk panel pilasters and
cornice.
5-window South return has mezzanine panels in 2 left bays with 2 long casements
and a round-headed door beneath. The 3 right bays have 2 tall storeys with very
high, round arched windows. Heavy cornice at 1st floor cills continues around
to lower, 2-storey, 5-bay South wing with fenestration much altered. Early Cl9
link to later C19 North wing with fenestration much altered. On Park elevation
the different periods show more clearly on the left a section of circa lpo with
an early C19 round bow added in the middle. Then an early C19 link to the original
house of 1694 and finally the North wing of circa 1855 with an early C18 wall
in its lower floor. Tile house belonged to the Wolfe family, parents to the victor
of Quebec. In 1802 it passed to the Hon George Lyttleton, later Lord Lyttleton,
who caused alterations to be made by Sir John Soane, not readily visible from
outside, and not much remaining inside. It has now been turned into flats.
RCHM.
LCC blue plaque commemorates the residence here of General Wolfe 1751-58.