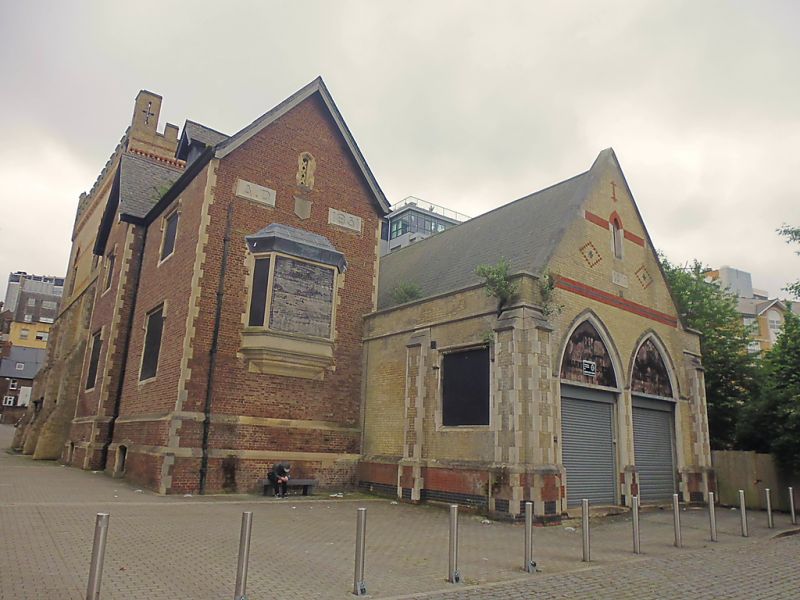 2.
Pumping Station. Built in 4 phases. Earliest Engine House, 1851,
by Cox, with further engine house of 1862 by Baldwin Latham,
further extension of 1876-7 by Smith of South Norwood to house
a compound horizontal engine and further extension of 1912. 1851
building is popularly supposed to be the converted and
transported West Croydon atmospheric railway station's engine
house of 1845. In fact it was the two Maudsley engines which were
moved, though it is possible some of the quoins were re-used.
Neo-Tudor style. Brown brick with stone quoins. Slate roof. 2
storeys over tall brick plinth - 5-lightstone oriel window on
west gable wall with date plaques over. North front has 2 3-light
windows on each floor with 4 centred heads and labels. Single
dormer. Gable over left hand windows. To the north is the engine
house of 1862 by C Baldwin Latham in castellated Gothic style.
Built of stock brick with polychrome brown brick and stone
dressings. 2 storeys over tall brick plinth with octagonal
castellated tower at north end. This has pseudo-machicolations
windows, and lancet . North front has 2 3-light windows,
casements with leaded lights, on each floor with pointed heads,
polychrome voussoirs and zigzag decoration in 3 colours of brick
(yellow, red and black). Castellated parapet with pseudo-
machicolations. Buttresses. Concrete door surround dated 1954.
South addition of 1872 by J Walker, stock brick with stone
dressings.
1 storey 5 windows. Recessed window bays with step up to door in
North bay under gable. South face has gable with occulis and 2
lancets. West addition of 1912 in stock brick and red brick with
slate roof.
[See "Buildings of England: South London" p216 Aubrey Wilson
"London Industrial Heritage" 1967 p117]