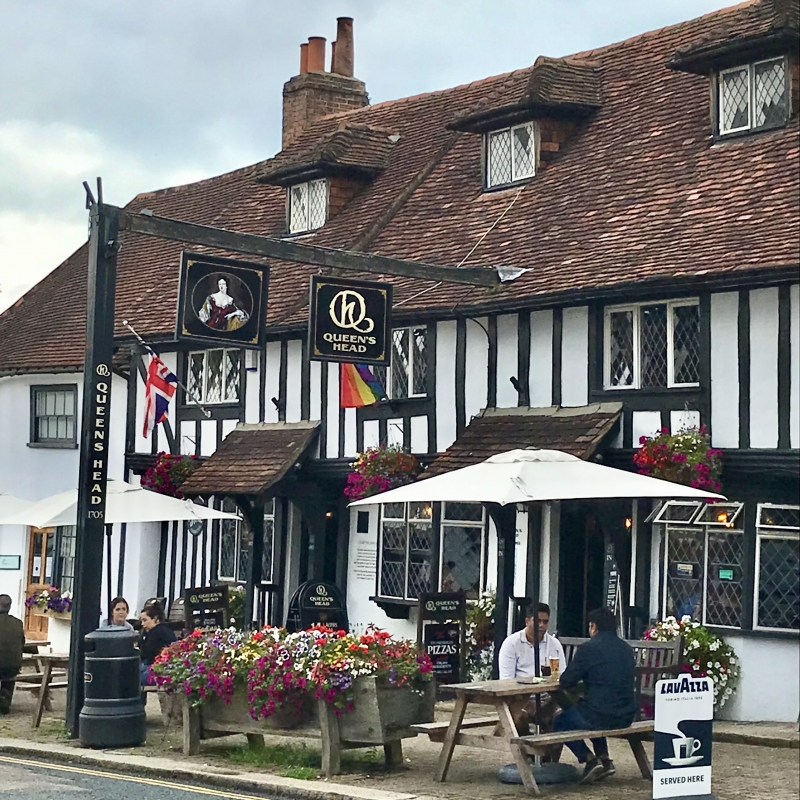 A public house, originally a house. Probably mid-C16, extended to the west in the early C17, with a late C17 or early C18 rear staircase addition and C19 and later rear extensions, refurbished around 1929.

A public house, originally a house. Probably mid-C16, extended to the west in the early C17, with a late C17 or early C18 rear staircase addition and C19 and later rear extensions, refurbished around 1929. The later C20 rear extensions are not included.

PLAN: the eastern three bays are the earliest part, a mid-C16 house which, on the evidence of surviving mortise holes, may have been of Wealden type but without an open hall. This house was extended by an early-C17 separately framed and jettied two storey west parlour bay with a heated room on each floor. A late-C17 or early-C18 staircase addition was added to the north, mainly behind the original western but now penultimate bay. Further rooms were inserted in the attic probably in the early C18. A north-east extension was added in the C19. Separate room divisions on the ground floor were removed in the later C20.

EXTERIOR: the south or entrance front onto the High Street has four 1920s hipped dormers with metal casement windows. The first floor overhangs on a continuous jetty with original floor joists exposed in the western bay with a C20 moulded beam and has applied 1920s closely-spaced wooden posts and curved braces at the ends and four triple casement windows. The ground floor is rendered except for some close-studding exposed in the western bay and there are 1920s triple mullion and transom casements. The penultimate window from the west has a similar but canted four bay window supported on brackets. There are two 1920ss entrances under penticed tiled hoods with arched heads. Attached to this front is a wooden gallows or beam arm and post inn sign, shown in a sketch of 1827.

The rear or north side has some exposed timbers on the first floor but much of the original building is concealed behind a later C19 two storey painted brick gabled wing attached to the eastern bay, the C17 projecting two storey staircase addition with a hipped tiled roof and further C20 extensions to the west.

The east and west sides of the building are concealed by adjoining buildings.

INTERIOR: the ground floor of the original building lost its original room partitions in the later C20 and now forms one large bar. The larger western bay, originally a parlour, has a chamfer and cyma stopped axial joist with regular straight, chamfered and cyma stopped floor joists, re-positioned C17 panelling and a wide C18 brick fire surround with a three-centred arch and 1920s brick interior. The penultimate western bay and the eastern bay have axial main joists, wavy floor joists typical of C15 and C16 service rooms and the eastern bay has a small diagonally set 1920s brick fireplace. The penultimate eastern bay has a reused main joist and narrower pit sawn floor joists. The bar counter and back fitting is later C20.

The first floor is accessed by a well staircase in a purpose-built stair tower with a simple moulded string and handrail, square newel posts and wavy splat balusters of late C17 or early C18 date.

On the first floor much of the original rear wall is exposed along a north corridor with jowled bay posts and tension braces. The eastern part of this corridor has some panelling incorporating a blocked panelled door with H-hinges and a nine-panel fanlight above, at one time forming the original north wall of the penultimate eastern room.

The eastern room has an exposed tie beam and wall-plate. It is accessed through a ledged plank door with pintles and thin spear-ended hinges and the top of a large tapering brick chimneystack along the north wall is concealed in a cupboard with a narrow cupboard door. There is a mid-C19 wooden fire surround with cast iron fire-grate.

The penultimate room to the east has an exposed top-plate, cambered tie beam and jowled post.

The penultimate room to the west has an exposed tie beam, jowled post, top-plate, storey posts and studs and a two-panelled door of late Georgian type.

The western room has a wide, early-C18 ledged plank door with an iron latch, hand wrought pintle hinges and a late-C19 pressed steel lock box. It is ceiled at tie beam level, posts to north-east, south-east and south-west are barely visible but without jowls and there is a shutter groove in the south wall-plate.

The dining room in the eastern extension has an Edwardian timber fire surround and cast iron fire-grate, both with sunflower motifs.

The door to the attic staircase is of ledged planks with an iron latch and pintle hinges. Steep straight flight stairs lead to the attics which are divided into four rooms and have a roof structure of clasped purlins with diminished principal rafters and tenoned collars retaining original rafters and some curved wind braces on the north side. Rooms were inserted into the three western bays probably in the early C18 when purlins were sawn through on the south side to insert dormer windows. The eastern bay was probably used for storage. There are some old floorboards, partitions of laths and daub and plank doors.

The cellar has a door with C19 box locks, a chamfered main floor joist and a C19 brick barrel shute.

A cottage and garden sold in 1536 by Richard Reading to William Edlin either refers to the three eastern bays of the existing building or a previous building on the site. Evidence that the three eastern bays of The Queen's Head originated as a house of Wealden type is based on surviving mortise holes and the type of floor joists in what would originally have been the end bays of the building, which are typical of C15 and C16 end service bays.

The property remained in the ownership of the Edlin family until Philip Edlin sold it in 1632 to Richard Nicholas of Woodhall, when the property was described as a 'messuage' (or dwelling) with a barn, stable, outhouses and orchard, lately occupied by Widow Andrew.

In 1633 Richard Nicholas sold the property to the older Thomas Bateman, who probably built the additional western bay of the building. The C17 parlour wing has a separate frame, unjowled posts and a higher ceiling height to the first floor room. Probably when the parlour bay was added the jetty was extended across the central bay of the C16 building to make a continuous jetty across the building. The property's use as a tavern may have started then.

The property remained the Bateman family until in 1684 Thomas Bateman's grandson of the same name, who was a plumber, sold the property occupied by Widow Page to Philip Street, a butcher. In 1692 when Philip Street sold the building to his nephew John Dearing, it was known as the Crown and similarly in 1726, but by 1742 the name had changed to 'The Queen's Head. For many years the date 1705 was painted on the front of the building, which may refer to a significant refurbishing in the early C18.

Thomas Clutterbuck, a brewer of Great Stanmore owned the property by 1820, and in 1827 a sketch of the High Street frontage of the building and its attached wooden gallows or beam arm and post inn sign was made by Theophil-Lindsey Aspland (1807-1890).

On the 1876 First Edition 25'' Ordnance Survey map a front porch, part of the eastern later rear extension and part of the west rear extension are shown. A postcard probably of circa 1900 shows the date 1705 painted onto a mainly rendered south front.

Clutterbucks sold the building to Cannon Brewery in 1923 and in the same year the building was recorded by F Kipps of the 'Royal Commission on Ancient Monuments'. The property was refurbished circa 1929. The front porch is still shown on the 1913 map but is missing by the 1934 Edition.

The Queen's Head was listed at Grade II on 9 July 1968. The eastern extension on the north side is shown extended on the 1970 Ordnance Survey map.

Formerly, and probably from the mid-C17, 29 High Street (Grade II) was also part of The Queen's Head but since the early C21 this property has been in separate ownership.

The Queen's Head, High Street Pinner, a C16 building with C17 and C18 additions, is listed at Grade II for the following principal reasons:

* as a substantially intact mid-C16, three-bay timber-framed house possibly of Wealden type with an early-C17, two-storey separately framed parlour bay;
* for internal fittings which include a well staircase with splat balusters, panelling and a series of C17 and C18 doors;
* for the rare survival of an attached late C18 or early C19 wooden gallows or beam inn sign.

* as a historic inn first recorded in 1692 and possibly in use as an ale house before that date.

* it forms part of a group of listed buildings on both sides of the High Street within Pinner Conservation Area.