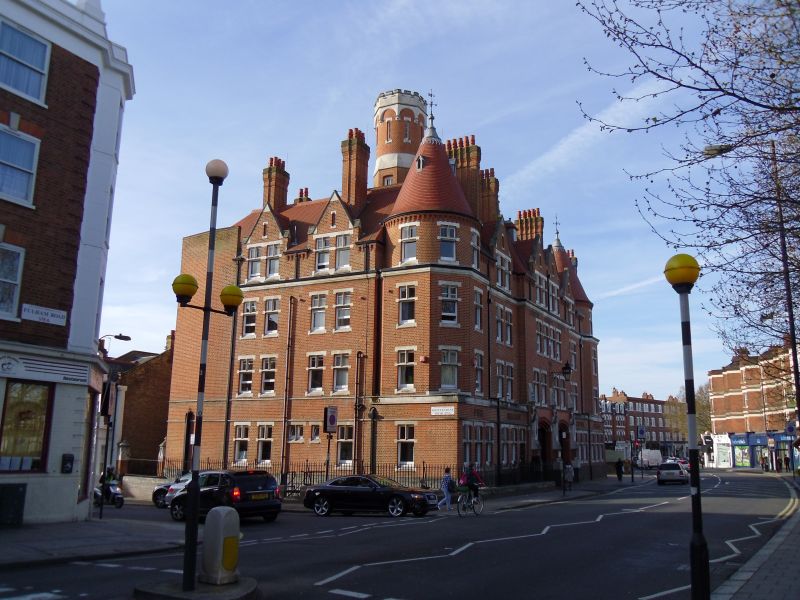 EXTERIOR: The four-storey station stands detached and its prominence in the streetscape is enhanced by the gabled façade, corner turrets and tall chimneys. The façade is symmetrical with two appliance bays in an advancing central section with a lead crested pyramidal roof and gabled dormers breaking through the corbelled eaves. The appliance bays, with replaced timber doors, have rubbed brick segmental arched openings with tiled spandrels, and are flanked by buttresses with stone pinnacles. Above them, just below the moulded stone string course is metal lettering announcing 'London County Council'. To either side of the central section is a bay containing paired sash windows which, like all the windows to the façade, have stone lintels, sills, transom and, unusually, a mullion to the upper pane. The façade is terminated at each corner by turrets with conical roofs with finials and lucarnes. The upper storeys have pairs of windows, the fourth in gabled dormers and the ground floor has four trios, two to each side of the appliance bays. To the left, behind the roof ridge, rises the striking watchtower. The round tower is on an octagonal base and has slit windows with stone dressings and crenellated stone capping; it is a rare surviving feature and notable for its height. To the sides and rear, the arrangement is determined by function and there have been a number of extensions, the most significant being the addition of a stair tower to the west in 1994. Two stone plaques between the appliance bays record the laying of foundations in November 1895 and the reopening of the station, presumably after refurbishment and extension, in March 1994. The fire lamp on the main elevation is a replica but the metal numbering recording the date of the station, 1896, the LCC crest above it, and the metal lettering reading 'Fire / Brigade / Station / Fulham' are original.

INTERIOR: Features which contribute to the special interest are: the appliance room space, although the wall and floor surfaces have been replaced; the staircase which retains its original handrail; the accommodation on the upper floors which retains a number of fireplaces with timber surrounds; the small number of original timber doors which survive; the segmental arched openings in the ground floor corridors. Much of the station interior was refurbished in 1994.

HISTORY: Fire services in London emerged principally from the need for insurance providers to limit their losses through damage to buildings and property in the period after the Great Fire of 1666. Initially each insurer maintained a separate brigade that only served subscribers until the foundation of an integrated service in 1833, funded by City businesses. In 1866, following an Act of Parliament of the previous year, the first publicly-funded authority charged with saving lives and protecting buildings from fire was founded, the Metropolitan Fire Brigade. Under its first Captain, Eyre Massey Shaw, the Brigade undertook an ambitious expansion programme of which a station at Fulham, built next to the present station in the 1870s, but now demolished, was a part. In the 1870s, a fire station-type of identifiable, landmark buildings emerged from the previous practice of adapting or emulating domestic buildings. The use of the Gothic style became more elaborate in the 1880s under the influence of MBW architect Robert Pearsall who, after 1889, headed new Fire Brigade Section of the London County Council which took over from the MBW. Fulham Fire Station of 1895-6, which replaced the earlier station next door, shows how the Fire Brigade's architects developed their designs towards the close of the C19. Deploying the same details (including pinnacles, buttresses and terracotta decoration) as earlier stations, fire stations by the 1890s had greater compositional complexity. Devices such as corner turrets and varying roof profiles - conical, pitched, pyramidal - created interest in stations which now occupied much larger sites, offered more substantial accommodation, and often had more than one elevation to the street. Of other stations built under this first period under the LCC, Wandsworth, Brompton, Dulwich, Rotherhithe and Kingsland Road have all been demolished; Manchester Square, Shoreditch, Bethnal Green and New Cross survive and all but the last are listed Grade II.

When Fulham Fire Station opened it housed twelve married firemen, six single firemen, one officer and one coachman; four horses were stabled and there was also space for the steam fire engine, manual engine, a hose tender and a horse cart. The building cost £11,570, and the site £2,000. The Fireman magazine reported the opening, noting 'the County Council were determined to make the Fire Brigade system absolutely perfect throughout the Metropolis, and the erection of that station was another evidence of their desire to protect the public from the ravages of fire'. Fulham was clearly a significant new station, and its opening ceremony was attended by the then newly-appointed Chief Officer Commander Lionel de Lantour Wells. The station was adapted for motor use in 1913.