A Grade I Listed Building in Lewisham, Lewisham 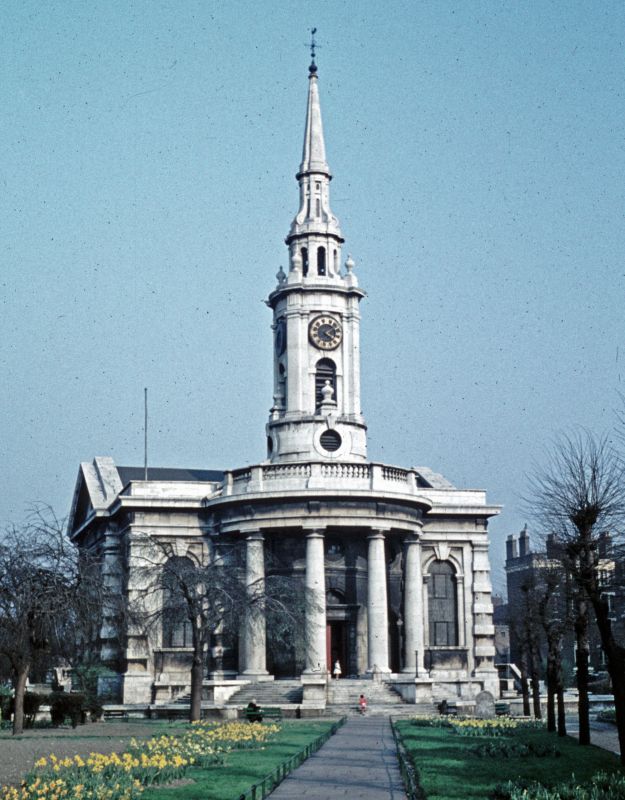 PLAN
Cruciform externally but suppressed to appear as a rectangular block with an E apse, W semi-circular Doric portico and round tower, and wide three bay pedimented N and S projections (the interior is also cruciform but again suppressed, particularly by the heavy cornice to the central space, to give the clear impression of a central rectangle with subsidiary side spaces) . Raised on a wide, integral stone terrace all the way around, with staircases to N, S and W. Crypt below whole church.

EXTERIOR
A large and magnificent church in a strongly modelled Classical style of the kind referred to as English Baroque, heavily Doric externally. Rusticated pilasters and recessed round arched windows with triple keystones throughout, with lunette windows over the doors and lighting the staircases at the W end. The W apse rises above a half-round staircase and is surrounded by a monumental semi-circular Doric portico,derived from the semi-circular porches of the north and south transepts of St Paul's Cathedral but ultimately from the half-oval porch Pietro da Cortona designed as part of the façade to the church of St Maria della Pace in Rome (1656-57) which Archer, unlike Wren, may have seen. The portico supports a tall, slender round tower of two stages with a two stage polygonal spire. The E apse has a Venetian window following the curve and a pediment. The N and S transeptal projections have pediments with lunettes and central doorways leading to balustraded symmetrical staircases with access to the crypt below the central terrace. Exterior very little altered, and powerfully conceived throughout.

INTERIOR
The power of the exterior extends to the fine and dignified classical interior, typical of the English Baroque in its sophisticated but muted central plan, its rich architecture and luxuriant plasterwork. It retains its original galleries and hugely rich plasterwork mouldings relatively unaltered, although the floor levels at the E end were raised in 1895. C18 painted decorative scheme in the apse, excellently restored in the early C21. Round entrance vestibule with curved staircases to the galleries. Giant Corinthian columns support a richly moulded entablature around the nave and apse, with the panelled oak galleries on the N and S sides suspended behind the columns. The corners are cut off diagonally and glazed internally to form vestries in the eastern angles and space for the gallery staircases in the western angles. Projecting inwards from each canted angle at gallery level is a box gallery on Corinthian columns of oak. The W organ gallery is higher than the side galleries and stands on paired fluted Corinthian columns. The brick crypt is vaulted and is very similar to that in Archer's St John's Smith Square.

PRINCIPAL FIXTURES
Outstanding plasterwork ceilings by James Hands. C18 painted decoration in the E apse was restored in the early C21 following fire damage. An unusual painted window of 1813 by William Collins has been reset from the E end in the internal window of the NW gallery box pew. The bombe-shaped pulpit was cut down from its original three-decker arrangement in 1873, at which date the tester was also removed. It retains part of its C18 wrought iron stairs. Similar C18 railings and gates, probably part of the former communion rails, are stored in the S gallery. Some box pews survive at the W end beneath the organ gallery.The nave and gallery benches were cut down in the C19 from the C18 box pews. C19 neo-Romanesque font brought from Rochester cathedral. Some good C18 and early C19 monuments, including Matthew Ffinch d.1745; Vice-Admiral James Sayer, d. 1776 by Nollekens, and Dr Charles Burney, d.1817.

SUBSIDIARY FEATURES
The churchyard boundary wall on the S side contains significant amounts of C18 and early C19 brick, especially at its eastern end.

HISTORY
St Paul's is one of the churches built by the Commission for Building Fifty New Churches, set up by Act of Parliament in 1711 and funded by a tax on coal coming into London. The Fifty New Churches Act was intended to provide additional church accommodation is areas of rapid urban growth such as Deptford, the site of one of the Royal Navy's most important dockyards. Its architect, Thomas Archer, was one of the Commissioners. He had travelled abroad between 1686 and 1689, almost certainly to Germany, Austria and Italy, which is often held to account for his knowledge of Roman and Viennese Imperial Baroque, of its features and use of space, though his buildings are generally tempered by the same fondness for simple but expansive and rich classical effects which characterise Hawksmoor and Vanbrugh's buildings. In this, St Paul's is part of the wider International Late Baroque, in common with works by Fontana and Juvarra in Italy, Fischer von Erlach and Hildebrandt in Vienna and Hardouin-Mansart in France. In particular, Archer in this church shared the same interest in suppressed central planning and cross axes which can be seen in Hawksmoor's churches for the Commission. He also designed St Philip Birmingham, now Birmingham Cathedral (1710-15, prior to the Commission; tower, 1725) and, for the Commission, St John's Smith Square, Westminster (1713-28). The plans for the church were drawn up in 1712, work began in 1713 and the building was largely complete by 1720, but some work continued until 1730. It was restored in 1856 by J Whichcord, in 1883 by T Dinwiddy, and several times in the C20 and early C21, but with the exception of the furnishings, which were remodelled in the C19, retains much of its original appearance. Something of the richness of the Commission churches, compared to Wren's City churches of forty years previously, is that the major ones cost as much as ten times the average cost of a Wren City church. The inventive triangular parsonage was also designed by Archer but was demolished c.1885 (illustration see K Downes, op. cit, fig. 46 and p. 101).

REASONS FOR DESIGNATION
The church of St Paul, Deptford, is designated at Grade I for the following principal reasons:
* Outstanding early C18 parish church, one of the finest achievements of Thomas Archer, in style English Baroque but lent interest by memories of the Roman and the Imperial Baroque characteristic of its author. Its power as a work of classicism is emblematic of the English Baroque moment.
* The modified centrally-planned interior, a feature shared with Archer's St John, Smith Square and Hawksmoor's churches for the Commission, remains very clear and possesses great spatial sophistication.
* The raised body of the church over the crypt, accentuated by elaborate flanking stairs, is an unusual arrangement which emphasises the importance of burial provision.
* The freestanding building, standing within a large graveyard, is powerfully designed on each elevation, and displays both great power and erudition in its design.
* Well preserved and well restored interior, with excellent plasterwork by James Hands and C18 painted decoration in the apse.
* Some interesting C18 and early C19 monuments and a C18 painted window are among the features of note.