A Grade I Listed Building in Hampton, Richmond upon Thames 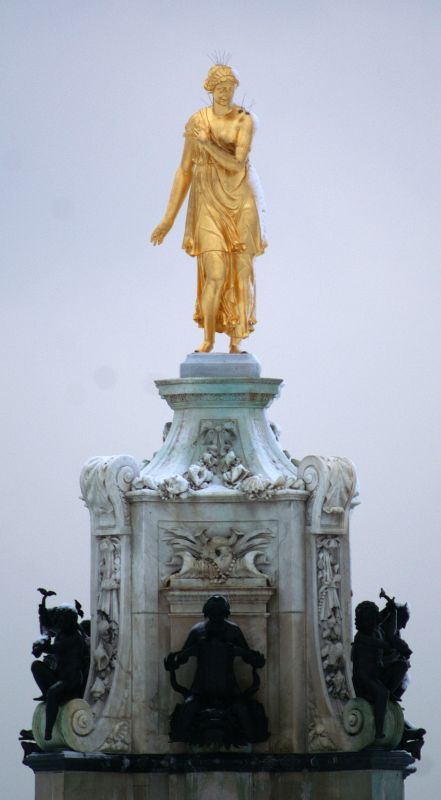 GV I
Sculpted fountain, set in the Great Basin at Bushy Park, 1712-13, under the supervision of Sir Christopher Wren. It incorporates the fountain of 1689-90 by Edward Pearce the Younger from the Privy Garden, Hampton Court which in turn incorporated bronze figures by Hubert le Sueur from a fountain designed c 1633 by Inigo Jones for the river garden at Somerset House. The Great Basin is not included in the Grade I listing.

The Arethusa or Diana Fountain stands in the centre of the Great Basin, at the confluence of the diverging avenues in Bushy Park, on the axis of the main entrance to the Park, to the north of Hampton Court Palace. The fountain is crowned by a gilt bronze figure of Arethusa standing on a white marble pedestal, which has eight groups of bronze figures around its base. It is raised on a Portland stone podium, set out in eight projecting square piers carved with deep, rusticated banding.

The marble pedestal, designed and executed by Edward Pearce in 1689-90 for the Privy Garden at Hampton Court Palace, was moved to its present position on a new, purpose-built podium in 1712-13. Square on plan, with concave sides and carved with swags of sea shells and sea creatures, the pedestal has large, sloping scrolls on the angles, on which are seated bronze boys holding fish, while mermaids astride sea monsters are placed against the sides of the pedestal. Both groups discharge water into four bronze basins set beneath the mermaids at the level of the plinth of the marble pedestal. The bronze figures are the work of the French sculptor Hubert Le Sueur and came from an Arethusa fountain designed by Inigo Jones for Somerset House in 1633-7 which was moved to Hampton Court in 1656. The basins were recast for Pearce's fountain in 1690 and the boys holding fish were recast in 1712. The crowning figure of Arethusa and the mermaids astride dolphins appear to have survived intact from Jones's fountain.

In plan, the podium continues downwards the projecting piers and angles in the sub-structure of Pearce's pedestal. The piers are enriched with bands of 'rustication' carved in stalactite formations. The podium is ornamented with four bands of 'grotto-work' rustication carved with naturalistic stalactites in high relief. Large scrolled consoles, carved with leaves and stalactites, support square fluted blocks beneath a continuous central rusticated sill band, while a similar sill band forms a ledge beneath the marble pedestal.

HISTORY: the Arethusa or 'Diana' fountain in the centre of the Great Basin of Bushy Park at Hampton Court is a composite structure of three periods. The lower podium, of tall rusticated piers, was constructed in 1712-13 to carry a white marble and bronze fountain designed and carved by sculptor and master mason Edward Pearce the younger (c1635-1695) in 1689-90 for a much smaller basin in the centre of the Privy Garden of Hampton Court Palace. The Privy Garden fountain in turn incorporated bronze sculpture, executed by the French sculptor Hubert Le Sueur (c1580-1658), from a fountain designed by architect and designer Inigo Jones (1573-1652) c1633 for the river garden at Somerset House.

Jones's fountain was completed in 1637. It is known from a sketch proposal in his hand of c 1633, a topographical painting by Cornelius Bol, and an anonymous drawing from the 1670s, which indicates that the bronze figures in the lower parts closely followed the original design. The crowning figure of Arethusa was changed in execution to a Diana-like figure clothed in an antique-style dress, gathered at the waist. She has none of the usual attributes of Diana - bow and arrows, crescent moon and hunting dog - and her identity as Arethusa, a nereid or sea nymph who attempted to flee the river god Alpheus and later became a fountain, is confirmed by a description in a Parliamentary inventory of 1659, soon after the fountain was moved to Hampton Court. This describes the bronze sculpture as 'Fo[u]r scollop basins', 'Fo[u]r Sea-Monsters', 'Three Scrowles', 'Fo[u]r boyes holding Dolphins' and 'One large brasse Statue on the top of the Fountaine called Arethusa'.

A description in 1663 by a French visitor, M. de la Molière, confirms that the arrangement of figures in the executed fountain followed those in Jones's design. The fountain was 'composed of four syrens in bronze, seated astride dolphins, between which was a shell, supported on the foot of a goat. Above the sirens, on a second tier, were four little children, each seated, holding a fish, and surmounting all a large figure of a lady - all the figures being bronze, but the fountain itself and the basin of marble'.

The mermaids or 'sirens' in this description were of particular interest to the artist of the 1670s sketch. His rendition of these delicately modelled sea creatures corresponds exactly with their appearance today. As there is no documentary evidence for the recasting of these figures, there seems no reason to assume that these bronze mermaids and sea monsters are not the originals from Jones's Arethusa fountain.

In 1689-90 Edward Pearce the younger, sculptor, master mason and decorative carver, redesigned the fountain for the circular basin in the middle of the new Privy Garden. Pearce (c1635-95) was one of the leading master masons of the later C17, working with Wren at St Paul's Cathedral. Pearce's fountain is recorded by Sutton Nichols in a perspective view of the Privy Garden in about 1699. Pearce rearranged the bronze figures around the base of a new white marble pedestal, carved with festoons of shells and sea creatures. The fish-bearing putti were moved down to the same level as the mermaids, and the basins - recast by Josias Iback - were set lower still to catch the water from the spouting figures above. Pearce's fountain was put in store when the southern end of the Privy Garden was reconfigured in 1700-01.

In 1712 an unidentified sculptor or architect working under Sir Christopher Wren designed the tall rusticated stone podium on which Pearce's fountain now stands. In plan, this podium continues downwards the projecting piers and angles in the sub-structure of Pearce's pedestal. Le Sueur's bronze figures of boys with fish were recast but there is no record of the recasting of the figure of Arethusa and the mermaids sitting astride sea monsters. The new fountain was placed in the middle of a 400-feet diameter basin, dug in 1699 under the supervision of the royal gardener, Henry Wise, as part of extensive new planting and landscaping to create northern approach to the palace across Bushy Park. As royal gardener, Wise was closely involved in setting out major and influential landscapes in the late C17 and early C18, reflecting the latest ideas from France and the Low Countries but establishing an English tradition which was admired and emulated.

Inigo Jones (1573-1652) was one of the leading and most influential designers of the period; his impact was expressed across a broad spectrum of work , from buildings such as the Banqueting House, Whitehall (1619-22, listed Grade I), to smaller scale monuments and in theatre design. Le Sueur's work in England reflects French influence on the royal court and on taste, but his sculpture is more commonly found in internal monuments, for example, in Westminster Abbey. His bronze equestrian figure of Charles I, the first of its kind in England, was cast in 1629-33. It too was set up in its present position, on the plinth carved by Joshua Marshall, at the head of Whitehall, at a later date, in 1675, when the political climate was more favourable.

REASONS FOR DESIGNATION
The Arethusa Fountain, Bushy Park, set in its present configuration in 1712-13 under Sir Christopher Wren, incorporates the fountain designed by sculptor and master mason, Edward Pearce the younger, for the Privy Garden at Hampton Court Palace in 1689-90. This in turn incorporated bronze figures by Hubert le Sueur from a fountain designed by Inigo Jones, c 1633, for the river garden at Somerset House. The Arethusa Fountain is listed at Grade I for the following principal reasons:
* Architectural and historic interest: it incorporates features from two of the most important sculpted fountains in C17 Britain, designed and created by leading and influential architects and craftsmen;
* Setting: axial position within Henry Wise's late C17 and the early C18 layout of Bushy Park (Grade I Registered landscape), associated with works for the royal court at Hampton Court Palace (Grade I listed, Grade I registered landscape).