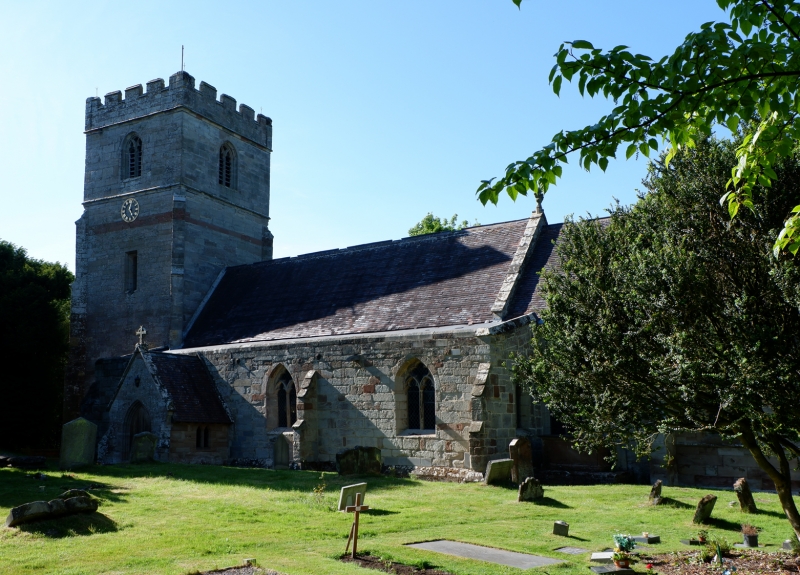 Church of England Parish: Salwarpe and Hindlip with Martin Hussingtree

Parish church. Early C12 origins, aisles added mid- and late C14, tower
rebuilt C15, further alterations and additions c1848. Sandstone ashlar,
plain tiled roofs, and parapets at gable ends with cross finials. West
tower, nave of three plus one bays with north and south aisles beneath
lean-to roofs and south porch, two-bay chancel with north vestry. Mainly
Decorated style with Perpendicular tower. West tower: C15; this replaces
an earlier tower built before the aisles and having north and south walls
forming bays similar to arcades; evidence of flying buttresses can be found
in both aisle walls indicating that the eastern arch of this tower was
spreading during the late C14; new tower built to west of former tower
and not in line or connected with it; the older tower was then removed and
the new one connected with the west ends of the aisle walls and finally
the north and south arches of the old tower were replaced by a continuation
of the nave arcade built outside them; roughly two stages with chamfered
plinth continued around rest of church; string above plinth and above and
below belfry stage; angled corner buttresses with offsets; west elevation
has a 4-light window, hoodmould with returns that continue as a string to
the buttresses; rectangualr light above and in north and south elevations;
belfry stage has 2-light louvred bell-chamber openings and above the upper-
most string is an embattled parapet; staircase at south-west corner is
expressed externally in the west elevation by three loopholes. Nave: three
bays plus additional west end bay dating from rebuilding of tower; north
aisle added c1350, and south aisle c1370. North elevation: gabled buttresses
with offsets at bay divisions and ends; two 2-light windows in easternmost
bays, large pointed arched light in westernmost bay and in third bay from
east is a blocked doorway opposing the south entrance; 2-light window in west
end elevation. South elevation: three 2-light windows; 2-light window in
west and east end elevations. South porch: c1848; gabled, end parapet with
cross finial, angled corner buttresses with offsets; pointed arched doorway
with mid-C20 door; paired cusped lancets in side elevations. South entrance
has a pointed arched doorway with hoodmould. Chancel: restored 1848;
apparently retaining earlier masonry; two bays; angled corner buttresses
and buttresses at bay divisions each side, both with offsets; all windows
have hoodmoulds and label stops carved in the form of human heads; 4-light
east window; south elevation has two windows and north elevation has a window
in the westernmost bay. Vestry: adjoins easternmost bay of north elevation;
separate gabled roof; north elevation has a pair of cusped lancets and to the
right a narrow pointed arched doorway with hoodmould and returns; at east end
is a 2-light window and above, at the junction of chancel and vestry roofs,
is a stone chimney stack. Interior: four-bay nave arcade, pointed arches of
two square orders; upper two piers are circular with plain bell capitals and
moulded bases and lower piers date from the tower alterations, the south
pier is square and the north side one a broad rectangular shape; tower arch
is C15 and the jambs are decorated with paired cusped pointed arched panels;
the chancel arch is C19 and is supported on a cluster of three colonnettes
with moulded capitals and bases; in the lower part of the north and south
walls are, respectively, four and three recesses with 4-centred arched heads;
above the second recess from the west in the north wall, the masonry has been
cut away, probably to contain an early stone rood; there is a similar recess
in the north-east wall of the chancel with a late C14 effigy of a priest in
mass vestments holding a chalice. Roofs are all C19. Chancel has reredos
relief of the Last Supper and, sedilia with two round-headed arches, possibly
of C16 date; small cusped pointed-arched recess, probably a piscina, at
eastern end of north aisle; also piscina in cusped pointed-arched recess at
south-east end of the south aisle; C19 font with square base and octagonal
basin; east end of both aisles has C19 parclose screens, re-using pieces of
C15 woodwork; C19 pulpit, miserichords in chancel and pews. C15 tiles at
west end of north aisle; also good C19 floor tiles. Two parish chests, one
dated 1697, one earlier and larger with three locks situated beneath tower.
Memorials: in south of chancel, above sedilia, wall monument to Thomas Talbot,
died 1613, with two kneelers facing each other across a prayer-desk set in a
round-arched niche; three kneeling children are carved beneath and the niche
is flanked by Corinthian columns, above which are putti, and at the top centre
is a coat of arms. At east end of south aisle is a black and white marble
altar tomb to Elizabeth Talbot, died 1687, with two female figures carved
upon the front and between them an inscription; above on the wall to the left
is a wall memorial to Olive Talbot, died 1681, with spiral columns, segmental
pediment containing a coat of arms and festoons; on the south wall is an
early C19 satcophagus-shaped memorial to Philip Gresley, died 1825. In the
north aisle, at the east end, are two mid-C19 memorials. Glass: east window
apparently by Hardman. A medieval church with a relatively complex building
history and retaining some unusual features. (VCH III (i); BoE).