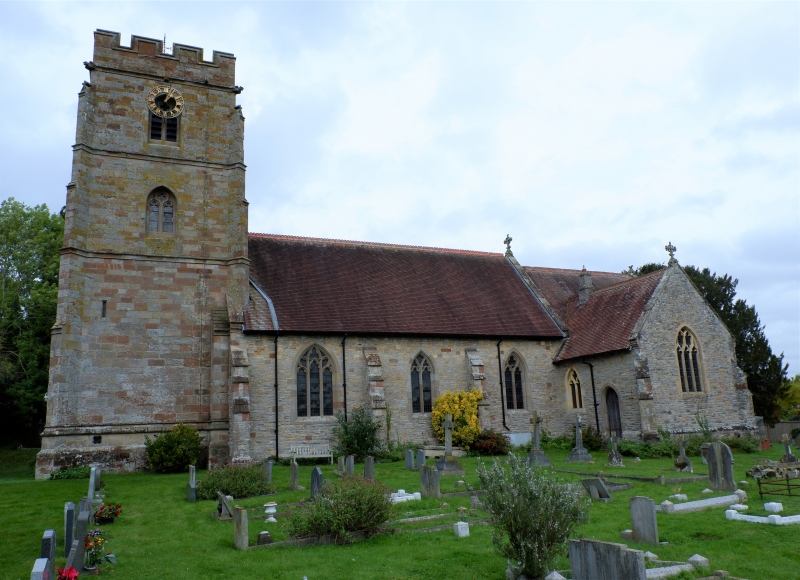 Parish church. C12 origins, altered C14 and C15, demolished 1881 and rebuilt
1881 - 5 by Preedy retaining some earlier features. Part-snecked lias limestone
rubble with ashlar dressings, part ashlar, plain tiled roofs with decorative
ridge tiles, and parapets with cross finials at gable ends. West tower, three-
bay nave with north porch, two-bay chancel with north and south transepts.
Decorated style. West tower: three stages with four strings and a plain
chamfered plinth that continues round the entire building; corner buttresses
with offsets, set diagonally at west end; lower stage has a 3-light west window
to the right of which is a narrow pointed arched doorway and above it the lowest
string forms a hood mould; this door leads to the stairs set in the south-west
corner of the tower which are lit by a loophole above the doorway and, in the
south elevation by a quatrefoil light above plinth level and, beneath the second
string, an additional loophole; the second stage has 2-light windows except for
the east elevation where above the apex of the nave roof is an elaborate crocketted
and finialed arched niche, flanked by small pinnacled buttresses, all apparently,
reset C15 work; the belfry stage has 2-light louvred bell chamber openings. The
string above has a grotesque head carved over each opening, and also gargoyles
at the corners; the tower is crowned by an embattled parapet behind which is a
shallow-pitched pyramidal roof and weather vane. Nave: three bays, buttresses
with offsets at bay divisions; south elevation has two 2-light windows and, in
the westernmost bay, a 3-light window; the north elevation has a 2-light window
in the easternmost bay and a 3-light window in the central bay which retains
some C14 stonework. To the right of this is the north porch, reused from the
older church and a fine example of late C14 carpentry; gabled and timber-framed
on chamfered sandstone base; corner posts are cut back to receive swept arch-
braces, which meet to form a 2-centred archway at the entrance and also against
the wall of the nave; these brace the cambered tie-beams and above the entrance
arch there is a broad central strut to the collar, shaped like a keyblock and
carved with an Annunciation; the bargeboards have a raised scalloped decoration;
each side wall has four renewed lower square panels and, above, an arcade of
eight cusped ogee-headed lights; the ceiling is divided into four main com-
partments by richly moulded ribs with carved bosses at the intersection and
subordinate hollow-chamfered ribs. The pointed-arched entrance door is framed
beneath the inner timber archway. Chancel: two bays with north and south tran-
septs; east and south transept gable end has diagonal buttress with offsets.
At east end is a 3-light window with hood mould and sill string, both having
foliated stops; the north-east window has paired, cusped lancets beneath a
square head, the south-east window is 2-light. Transepts have 3-light gable
end windows and a 2-light window in each side elevation; the south transept
retains the best C14 stonework and also has a pointed west doorway; the north
transept has a pointed doorway in place of the east side window and, in the angle
with the chancel, is a hipped-roofed projection with a small semi-circular headed
window. Interior: the tower arch has re-used C15 stonework and is of two chamfered
orders with hollow chamfered responds and bell capitals; the chancel arch is C19
and supported on engaged columns; the transept arches are of similar date and
design. Chance has a C19 wagon roof and nave has C19 arch-braced collar trusses
with king posts and are alternately cusped with traceried panels. The east
window has nookshafts and a sill string, there is a cusped ogee-arched aumbry;
north transept has a C15 cusped, pointed-arched piscina with a square head;
C19 rood screen, richly carved with overhanging vaulted cornice; C19 parcloses.
Late C12 limestone lecturn, restored c1845 with scrolled vine design and kneeling
figure at front; C15 octagonal font with finely detailed traceried panelling;
C19 pulpit and pews. Memorials: in the tower an early C19 memorial to Smith
family and two mid-C19 memorials, one by J Stephens for the Farley family.
Glass: west window of north transept has some C15 fragments.
Although the church has been rebuilt it retains some high quality medieval
features, notably the north porch, lectern and font, for which it has been
graded II*. (VCH 3 (ii), p 333; BoE, p129/30).