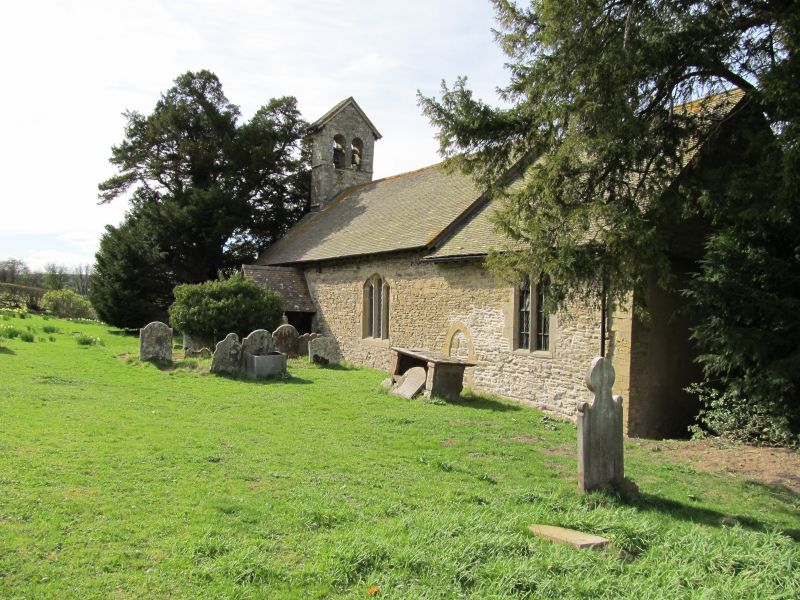 LEINTHALL STARKES CP
so 47 SW
3/36 Church of St Mary Magdalene
11.6.59
II*
Parish church. C12 with C13 and C15 alterations; restored in 1876. Sandstone
rubble with ashlar dressings, rendered at east end with plain tiled roofs.
Continuous two-bay nave, with south porch and west bellcote, and singe-bay
chancel (There was formerly a west porch or annexe extending the full width
of the building). Nave: at the west end is a large central C19 buttress
with offsets. There is a C12 round-headed light situated high up in the
gable apex because of the former annexe. Beneath it is a chamfered string
course about 12 feet above the ground terminating in corbels about three
feet from the ends of the wall. Another corbel survives at the south end
of the wall. The north elevation has an eastern C12 round-headed light and
at the western end a pair of C13 cusped lights completely restored externally.
The south elevation has a partly restored C15 window of three lights with a
four-centred head. The south porch is circa 1876, gabled and timber-framed
on a rubble base. It has scalloped bargeboards, two chamfered arch-braced
tie-beam trusses and three cusped pointed openings each side, the lower
half of which are boarded. The south doorway is C12 and has plain square
jambs and a round head. Attached to the C19 door is part of the cusped
ogee-arched head of a C14 door enriched with rosette reliefs. The west bell-
cote is of uncertain date and restored on the west face; it is gabled and
pierced by two round-headed openings with a single bell hanging in each open-
ing. Chancel: the rear arch and all the east gable have been rebuilt. There
is a C12 round-headed light in the east wall and the north wall. The south
elevation has a pair of C13 cusped lancets and an early C13 blocked doorway
with a pointed head and roll-moulded jambs. Interior: C15 nave roof has arch-
braced collar trusses and cusped wind-braces forming 2 1/2 tiers of lozenge-shaped
panels. The sawn-off ends of the former tie-beams are situated beneath eaves
level. The chancel roof is a C19 copy and the truss at the junction of nave
and chancel has a tie-beam set beneath it supported on cusped brackets pierced
with trefoils and quatrefoils. There is boarding above the tie-beam with slit
openings. There are two corbels flanking the altar, probably to support small
figures and also a corbel in the upper part of the side walls which may have
supported a former roof truss. The small reredos is possibly C17 and is in
the form of a six-bay round-headed timber blind arcade with scrolled detail on
its upper part. The Cl7 altar table has chamfered legs and shaped top rails.
The rood screen is c1500 and has thin traceried arcading, moulded mullions,
beam and rail. The circular font is C13 but entirely retooled. The pulpit
is C19. The side walls of the nave have re-used late C17 or early C18 panel-
ling. Memorials: there are two Cl7 ledger slabs in the nave to Thomas Goodere,
died 1692 and Anne Goodere, died 1695. (RCHM, Herefs, Vol III, p 104-5;
BoE, p 221).