A Grade II Listed Building in Downton, County of Herefordshire 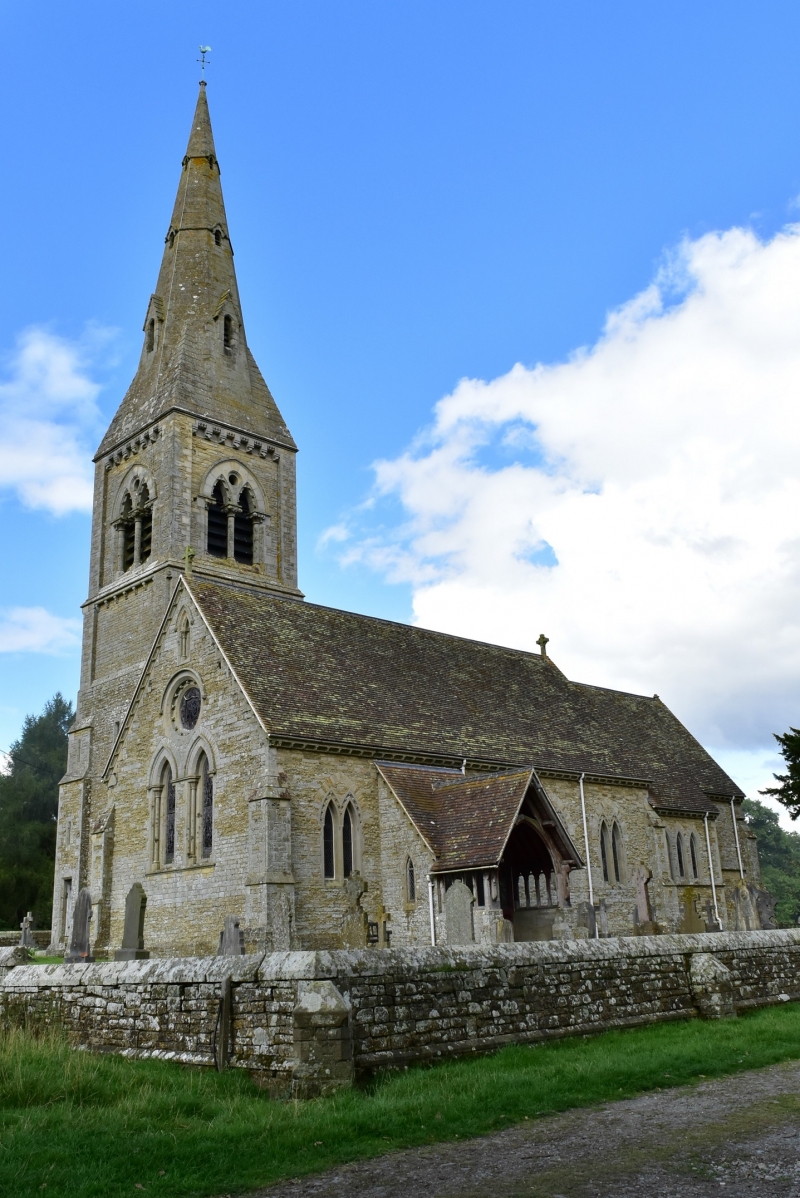 DOWNTON CP
SO 47 SW
3/14 Church of St Giles
II
Parish church. Circa 1861 by S Pountney Smith. Coursed dressed sandstone
rubble with ashlar dressings and plain tiled roofs with gable-end cross
finials. North-west tower, five-bay nave with three-bay north aisle and
north and south porches, two-bay chancel with north organ chamber. Early
English style. North-west tower: two stages with chamfered plinth and
clasping buttresses with offsets. Lower stage has a round-headed west door-
way with a hoodmould. Above it is a pointed opening pierced with three
circular windows and which has a hoodmould with head stops. There is a
lancet above this opening and also in the east side. In the north side is
a 2-light window beneath a rectangular light. The belfry stage is situated
above a tiled offset and a corbel table; it has 2-light louvred bell-chamber
openings with dog-tooth moulded heads set within single pointed archways
with hoodmoulds, imposts and nookshafts. The broach spire has an enriched
corbel table at its base, three tiers of lucarnes (the upper two tiers are
each linked by a continuous hoodmould), a finial, and a weathervane. The
north-west buttress houses the tower stairs and has a narrow chamfered west
doorway and two slit windows in its north and west elevations. Nave: there
is a continuous chamfered plinth, a dog-tooth eaves cornice to the north
aisle (which recurs on the organ chamber and at all gable ends) and an
enriched corbel table beneath the eaves on the south elevation which is
continued around the chancel. The west end has clasping buttresses with
offsets, two lancets with nookshafts and hoodmoulds, a similar smaller lancet
in the gable apex and, between them, a large circular window with dog-tooth
mouldings and a hoodmould. The north aisle has a catslide roof, a lancet
and also two 2-light windows with a grotesque head corbel at the junction of
the arched heads. The gabled north porch at the eastern end has a quatre-
foil window at its north gable end and an east doorway with nookshafts and
hoodmould. In the south elevation of the nave are four pairs of lancets
with foliated reliefs enriching the arched heads and set beneath relieving
arches. The south porch has a lean-to roof from the centre of which projects
a gabled, timber-framed additional porch. This outer porch has overhanging
bracketted eaves, a chamfered pointed archway, and four glazed cusped lancets
each side. Within the inner porch is a pointed doorway with half-glazed
double doors, flanking glazed cusped lancets and a glazed surround. There
is a lancet in each side elevation. The inner porch leads to the south door-
way which is pointed, of three orders (the central one is shafted with dog-
tooth mouldings on the capitals) and has a hoodmould. Chancel: clasping east
end buttresses with offsets and two narrow gabled buttresses (which flank the
central lancet of the east window) interrupt the otherwise continuous sill
string. The three lancets at the east end have a stepped continuous hoodmould
and there is a small lancets with a hoodmould in the gable apex. There is a
lancet at the eastern end of both side elevations. The south-west bay projects
slightly and has a group of three lancets. The north organ-chamber has a cat-
slide roof (partly continued from the north aisle roof) three north lancets
and a large east lancet with a hoodmould. There is a large chimney with gabled
offsets at the junction of the organ-chamber and chancel roofs. Interior: three-
bay nave arcade with quatrefoil columns. Chancel arch is similarly detailed.
Nave and chancel have gilded timber rib vaults with gilded bosses and stone
vaulting shafts on corbels. Dog-tooth mouldings, nookshaft detail used
extensively in chancel (east window, archways to organ chamber, south-west
recess and aumbry). There is a five-bay reredos with crocketted gabled niches
containing figures. Circular stone font and four-sided arcaded stone pulpit
also have dog-tooth detail. Parish chest in vestry beneath tower is circa
1650, and bears initials "ML". (BoE, p 117).