A Grade II* Listed Building in Eardisland, County of Herefordshire 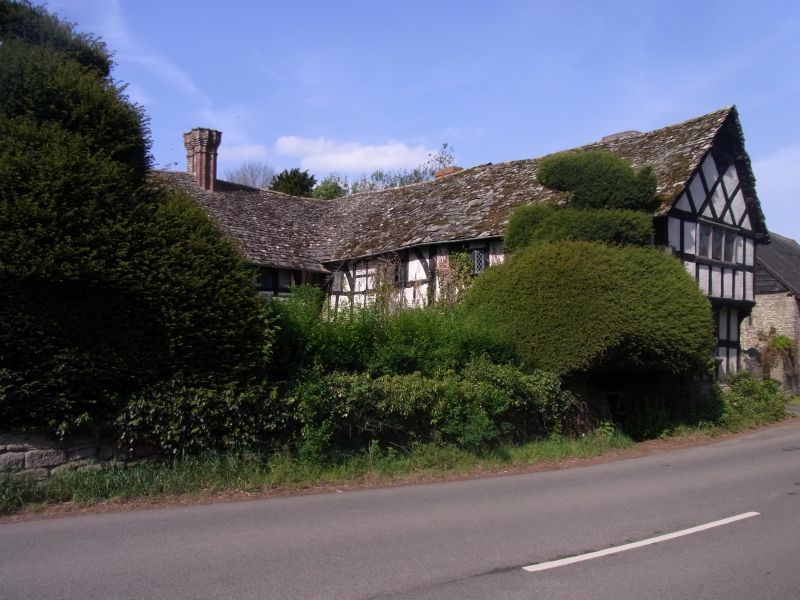 House. C14,extended C16 and C17, with some early C20 restoration. Timber-
frame with rendered infill on a rubble plinth under a graduated stone tile
roof. H-plan, the central, formerly open, hall range aligned east/west.
The west cross-wing is probably late C16, extended to the north in the C17.
The east cross-wing is C14, extended to the south in the C17. The west
cross-wing has a lateral stack on the west wall, and an axial stack tpwards
the north end. A stack has been inserted in the centre of the hall and the
east cross-wing has two lateral stacks. They are all of rubble with renewed
brick shafts. South front has gabled cross-wings to each side, that to right
proejcting much further. The left-hand cross-wing is of one storey with the
attic above lit by a 4-light casement in the gable over a 5-light timber
mullion and transom window. The hall range in the centre is of two storeys
witha 3-light casement to the left and two single-light casements to the
right. Ground floor has a 3-light casement to left, a 2-light casement to
right. Entrance to right has a lean-to tiled canopy and a C19 studded door.
The right-hand cross-wing is of two storeys, jettied, with a 3-light casement
under a plank weathering. The ground floor has a 4-light mullion and transom
window. A small pigeon loft in the apex of the gable above. Framing of C14
portion is four square panels high with curved angle braces. The left-hand
cross-wing is three square panels high, the gable-end truss has a collar and
V-strut in the apex. The other cross-wing is four rectangular panels high,
with a moulded bressummer to the jetty. The gable-end truss has diagonal
framing. Interior not inspected. The hall roof is reported to be of two main
bays, heavily smoke blackened. The central truss has an arch-braced tie-beam,
the braces springing from moulded capitals. The collar has curved braces
below, and the upper surface is cusped with the principal rafters to form a
trefoil. The wind-braces are cusped. The C14 portion of the east wing is
of three main bays, the trusses having tie-beams and vertical struts to the
collars. The wind-braces are curved. The inserted hall floor has exposed
chamfered and stopped ceiling beams. (RCHM, 3, pp 47-48, no 4; BoE, p 119).