A Grade I Listed Building in Birley with Upper Hill, County of Herefordshire 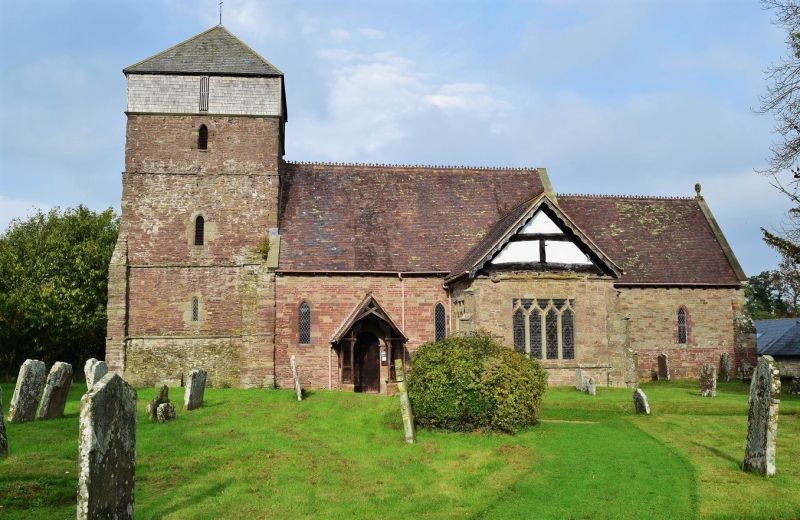 The west tower, of the early C13, is of four stages, the belfry stage is timber-framed and shingled, probably C17, with vertically slatted openings. It has a battered plinth capped by a roll moulding and clasping corner buttresses. The ground stage has a single-light semicircular-headed light in each wall, the first stage a pointed lancet in each wall, and similar windows to the second stage. The nave is early C14, of three bays on the north wall. A central lancet is flanked by two windows, both of two pointed lights under a two-centred head. South wall has two lancets flanking the C19 south porch. The south door is probably C12, with a simple semicircular arch, chamfered label and chamfered jambs. The late C14 south chapel projects at the east end of the nave and has a four-light window in each wall, the lights have ogee trefoiled heads, with cusped spandrels and square heads to each window. The gable has an exposed timber truss with a cambered tie beam and a central strut to the collar. The chancel is also C14, of two bays with C19 lancets in the south wall with priest's door between. The north vestry is late C19. The east window is of three stepped pointed lights below a rose window of the C19.

INTERIOR: the C17 tower arch is segmental-pointed of two chamfered orders, the responds each have an attached filleted shaft with a simple foliate capital. The arch to the south chapel is late C14 and is two-centred of two chamfered orders, the outer continuous, the inner with moulded imposts and chamfered bases. In the east respond there is a squint (now blocked). The chancel arch is early C14 and is two-centred of two moulded orders with a moulded label. The outer order has ballflower ornament. The moulded responds each have three engaged shafts, the north respond having a moulded and enriched capital, the south respond capitals with dogs' heads and a fleur-de-lys. Piscina in south wall of chancel has a C14 cinquefoiled head and projecting quatrefoil drain. Piscina in south wall of nave, also C14, with ogee head and a square-headed piscina in south wall of the south chapel. Roofs of nave and chancel are C19 common rafter type, with straight braces to the collars. South chapel roof is C14 of three bays with arch-braced collar trusses and two tiers of purlins with cusped wind braces.

The font under the tower is C12 and has a round bowl with a three-strand interlaced band, a short arcaded stem on a diapered plinth. The pulpit in the north-east corner of the nave is of semi-octagonal plan with two tiers of panels, the lower tier with incised rosettes, the upper arcaded. A small shield bears the date 1633. In south chapel two wall monuments with broken pediments and urns to Mathew Croose (died 1798) and Thomas Croose (died 1776).