A Grade I Listed Building in Brinsop and Wormsley, County of Herefordshire 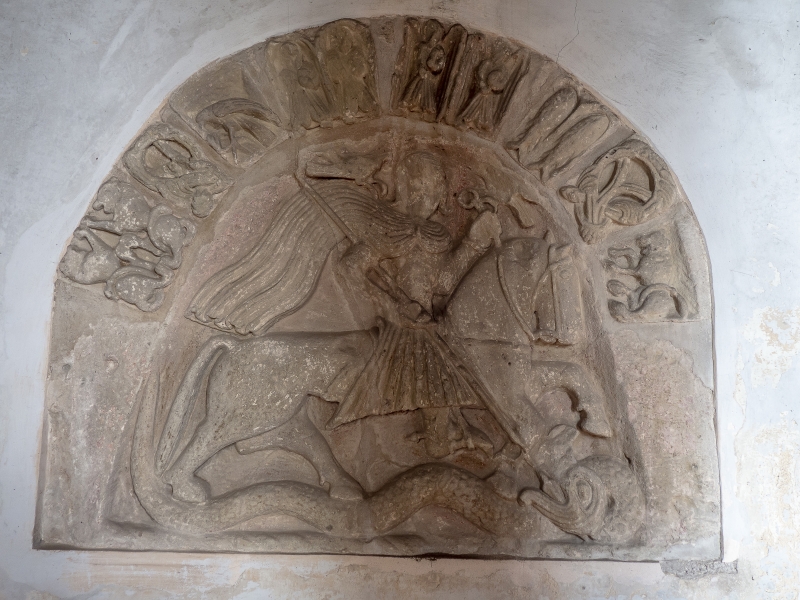 I
Parish church. C12, C13 and C14 with later alterations. Restored 1866-1867 and after 1919 by Ninian Comper. Sandstone rubble with sandstone dressings and tiled roofs. Continuous four-bay nave and chancel with north aisle and north vestry. South porch and western bellcote.

North elevation has to the right a two-light window in a two-centred head. Each light is cinquefoiled. Quatrefoil in spandrel. Vestry probably late C19 or early C20 to centre has foliated coffin lid on right-hand return and ogee head to north window. Chancel aisle to left has three stepped ogee-headed lights in north window. East window of aisle has a window like that of north side of nave aisle. East window of chancel has three stepped lights, the outer two lancets, under a two-centred head with label. Flanking the window are two tall weathered buttresses. Verge and gable cross.

INTERIOR has nine-bay roof to nave and chancel with arch braces to collars, probably late C19. Heavy truss consisting of three posts to collar with V-struts at liturgical division of nave and chancel is probably C17. At west end of nave are restored beams resting on corbels beneath bellcote. Aisle roof has close-set rafters producing panelled effect.

East window has two panels and several fragments of C14 and C15. One central panel has St George under a canopy with poppyhead; another, above, has a saint with blue clothes. To the top of the window is a Virgin and Child, probably early C20. South window dated 1929 depicts the Shepherds and Magi and is dedicated to William Wordsworth. Painted foliage, ashlar lines and figures, possibly C14, to east. Large gilded ceilure of early C20, above altar.

Chancel screen, probably C15 and much restored, has four panels to each side of entry. Upper open panels have foliated and cusped tracery in heads. Early C20 cresting with gilded figures of The Crucifixion and four angels. Similar screen divides chancel from north aisle in eastern bay of arcade. Nave has three of the four bays of the arcade. Double chamfered arches on cylindrical piers with octagonal abaci and part octagonal responds.

Font has tapered cylindrical bowl, perhaps early C13 on chamfered base. Stoup is C15 and part octagonal with quatrefoils in side panels. Coffin lid, perhaps C13, against west wall, has incised circle and cross with shaft emerging asymmetrically from the circle. Under west window, carved panel, probably C12, consisting of four birds set in roundels. Four brass plaques, all C18 to members of the Donsey family. Floor slab raised against wall is for Roger Donsey, died 1640. Remains of wall-painting of The Crucifixion, possibly C14, over south door. Large monument on south wall for William Donsey, died 1708. Marble with inscription surmounted by drapery, urns and swags and flanked by a pair of putti. Pulpit probably early C20 is oak, part octagonal with delicate linenfold panels, that to west with additional flower-motif. Lectern, probably early C20 has eagle on crocketted and pinnacled shaft.

West window, early C20, by Comper, for three members of the Royal Flying Corps, depicts Christ carrying the Cross with heroes. South-east window, dated 1927, with Comper's strawberry-plant signature, is for Hubert Delaval Astley and depicts St Francis of Assisi. Adjacent window to west is for W C Fowles, died 1881, and shows St George. North aisle has excellent mid-C12 sculpture. Tympanum of St George and the Dragon and radiating voussoirs with fish, angels, bull and grotesques. Above the vestry door a segmental arch with more C12 voussoirs reset. To south of east window is a portion of rope-moulded carving, probably C12. Nearby a small grey and white marble wall monument for Richard Dansey, died 1813, with urn and apron. Organ is probably late C19 with oak case, two manuals and exposed galvanised pipes by Harrison and Harrison of Durham and London. North/south screen similar to those of chancel. Beneath east window, two coffin lids, both probably C13, one is exceptional with raised wavy foliated stem and intersecting circles forming cross-head.

East window has stained glass probably early C20 depicting The Annunciation. North-east window for Dorothy, Mary and Dora Wordsworth, dated 1875, and shows SS Dorothy and Faith. North-west window, dated 1873, is for David Ricardo, grandson of the political-economist of the same name and depicts the Holy Ghost and Blind Justice. The glazed quatrefoil of the spandrel above has a small C14 Christ in Majesty. The Wordsworths and Ricardos had longstanding associations with the parish. Sir J Ninian Comper designed the reredos, figures on chancel screen, several of the stained glass windows, the ceilure in the chancel and restored the east window.