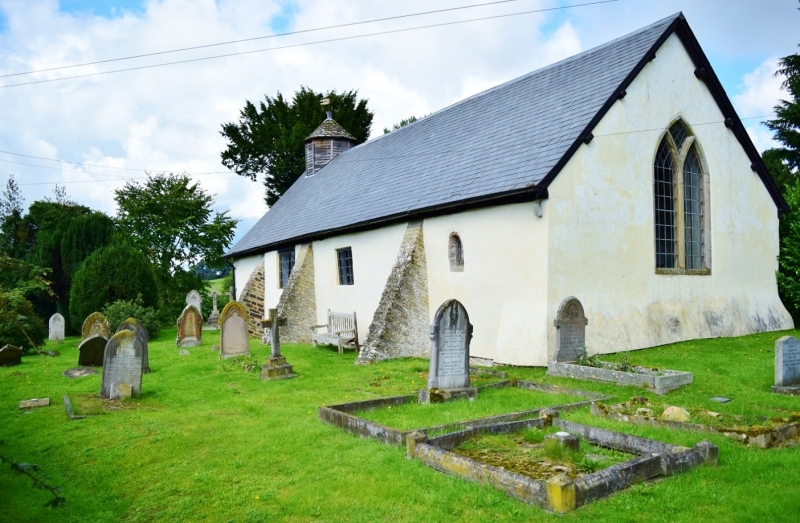 Chapel. Probably C12, altered C17, restored 1823 and late C20. Coursed
rubble, mostly rendered, with tile roof. Chancel and nave in one, west
porch. Chancel has a small semi-circular headed window in each wall, the
east window is C19 with Y-tracery under a segmental pointed head. Nave
has two 2-light casements, probably C17 in south wall and one in north wall.
Two massive lean-to buttresses, that to west bearing inscription: "I WINNALL/
CHAPEL WARDEN/ 1823". Break in wall to west of buttress may indicate a
western extension. C12 west door (possibly re-set) with wooden porch has
a distorted semi-circular head of two orders. The upper part of west wall
is a timber-frame roof truss with two collars and multiple struts. Supports
an octagonal C17 bell cote. Interior: piscina in south wall of chancel has
a shouldered head and square drain. Roof: C14 with some curved wind-braces
to the two tiers of purlins over chancel; over nave there are some cusped
wind-braces. The roof was much altered in C17 by the insertion of tie-beam
trusses with collars. Fittings pulpit of five sides with C17 arcaded panels
in a C19 frame. Altar rail has C17 turned balusters and moulded hand rail.
Reredos composed of re-set C17 panelling installed in 1894. Nine pews to
west end of nave have shaped bench ends, probably C17 (RCHM 3, p 11; BoE, p 221).