A Grade II Listed Building in Edvin Loach and Saltmarshe, County of Herefordshire 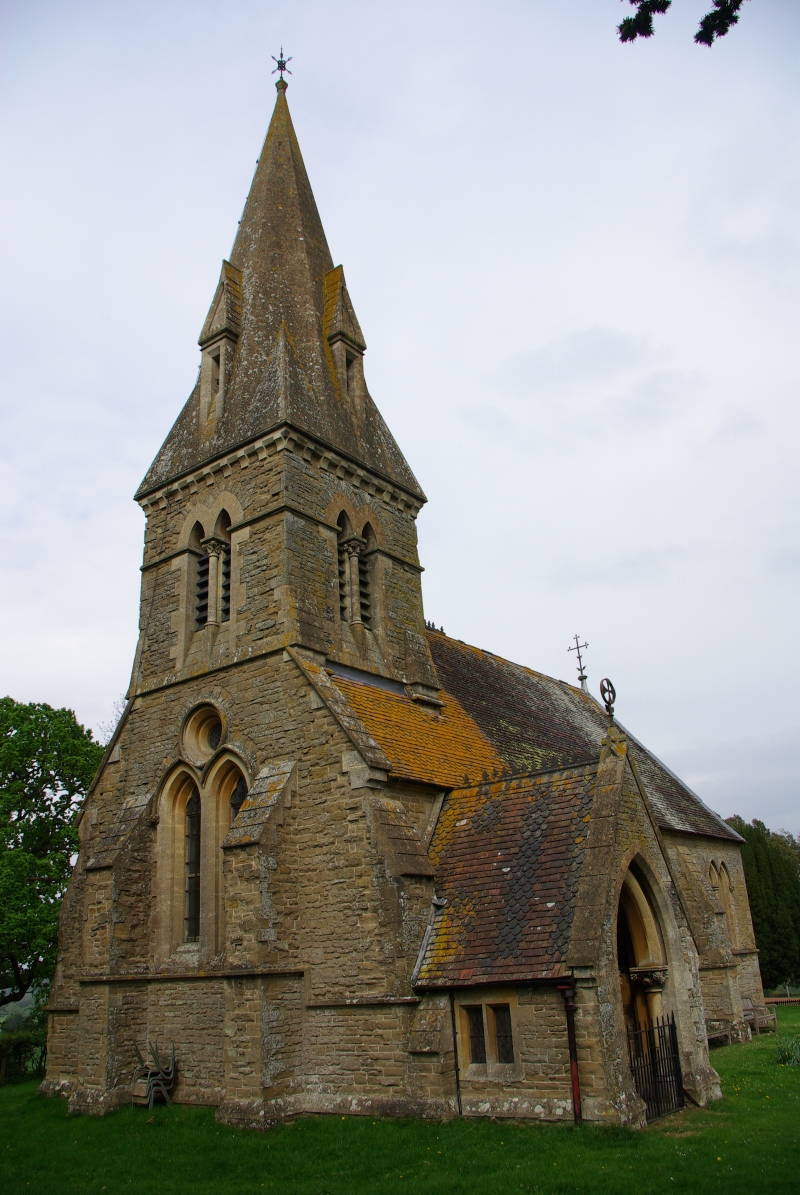 EXTERIOR: Compact and severely detailed Early-English church with steep roofs and iron cross over the east end. The nave has two 2-light windows in north and south walls. The porch entrance has round responds with foliage capitals, inside which the nave south doorway has continuous mouldings. The nave is buttressed below the tower. Its west window has a geometrical tracery light. Two-light bell openings have central columns with foliage capitals, and louvres. A corbel table is below the stone broach spire with lucarnes. Chancel windows have hood moulds with foliage stops, and sill band. In the south wall are twin pointed lights with central column, and the 3-sided apse has single-light windows. The north lean-to vestry has a pair of narrow cusped lights in the east wall.

INTERIOR: The tower is supported in the nave by 2 stout round piers with foliage capitals, below a stilted tower arch with filleted roll moulding, and segmental pointed arches on north and south sides dying into the imposts. The division between nave and chancel is expressed only by a wide pointed wooden arch. Nave and chancel have a trussed-rafter roof. Walls are plastered. The nave and chancel retain original tile floors, with raised wooden floors beneath the pews.

PRINCIPAL FIXTURES: Many of the furnishings are of 1860. The plain octagonal font is on a stem with clustered shafts. The plain stone polygonal pulpit is painted white and has one marble shaft. Wooden communion rails have a lozenge pattern. Simple pews have shaped and moulded ends. Priests stalls, on the south side, have high arm rests and panelled front. The apse has stained-glass windows, post 1869, showing Crucifixion, Resurrection and Ascension.

SUBSIDIARY FEATURES: The ruins of the earlier church are in the churchyard (LBS no 151186). Old and new churches stand within a motte and bailey, of which the bailey defences correspond closely with the edge of the churchyard.

HISTORY: Built in 1858-60 at the expense of Edmund Higginson of Saltmarshe Castle. He signalled his ambitions by employing the high-profile architect George Gilbert Scott (1811-78), who designed Edvin Loach church in his favoured late-C13 style. It stands next to the church that it replaced, and which has slowly fallen into ruin.
George Gilbert Scott (1811-78) was the most successful church architect of his day. Often criticised for over-restoration, his work was usually respectful of medieval buildings, while his new churches generally had a harmonious quality which derived its character from the architecture of the late C13 or early C14. He also designed a number of very important secular buildings, for example the Albert memorial and the Midland Grand Hotel at St Pancras.

REASONS FOR DESIGNATION:
The church of St Mary, Edvin Loach, is listed Grade II for the following principal reasons:
* It is a well-designed small rural church in Gothic-revival style, retaining original character and detail.
* For the involvement of George Gilbert Scott, a leading High Victorian church architect.
* For group value with the older church on an earlier defended medieval site.