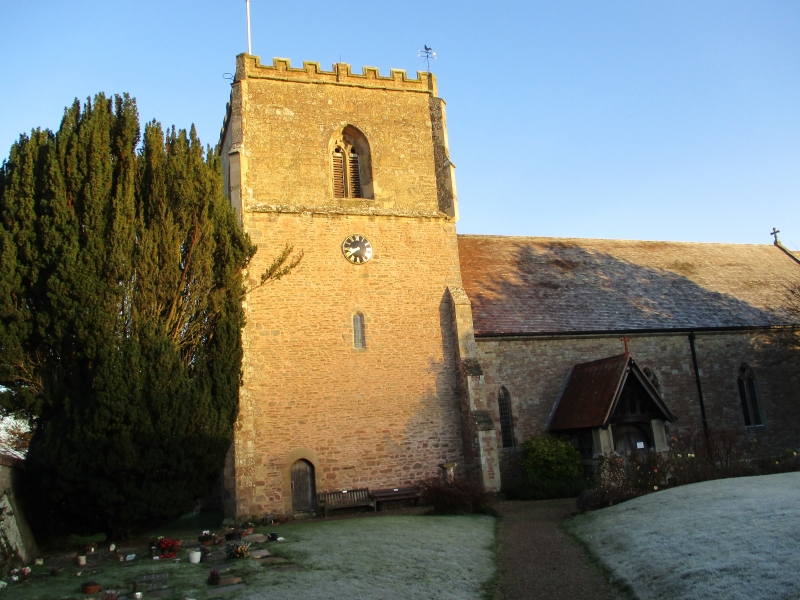 EXTERIOR: The 3-stage tower is Transitional work of c1200 in its lower stages, and has C19 diagonal west buttresses and angle south-east buttress. It has a south doorway with a cyclopean arch and, in the second stage, a round-headed window, whereas the corresponding north window is pointed. Set into the wall on the north side is a fragment of masonry with crockets, probably Anglo-Saxon. The west side is altered, with 3-light C19 Perpendicular west window, above which the second stage has a small cusped window under a square label. North and south sides have clock faces installed as a 1914-18 war memorial. The freestone upper stage, with diagonal buttresses, is C15. It has 2-light bell openings with louvres, and embattled parapet. The nave south doorway is late C12. It has nook shafts with scallop capitals and arch with roll mould and chevrons. It stands in a porch added in 1893. The remainder of the church is C19 work in the Decorated style. The nave has three 2-light windows and a single-light window L of the porch. In the chancel are two 2-light windows on south and north sides, and south priest¿s door. The east window of 3 stepped lights is beneath a single pointed hood mould. Either side of it are re-set grotesque heads from a C12 corbel table. Two similar corbels, of a face-puller and an animal head, are re-set below the south side of the east verge. The north aisle has 2-light windows, and vestry under an outshut roof, which has square-headed windows and west door under a shouldered lintel.

INTERIOR: The Transitional tower has responds of 3 clustered shafts, scalloped capitals and pointed stepped arch. North and south interior walls of the tower base are timber-framed with square plaster panels. Nave and aisle walls are exposed hammer-dressed stone. The 6-bay nave arcade has piers with 4 clustered shafts and double-chamfered arches, both piers and arches being executed in banded masonry, with alternating red and cream courses. Nave and chancel have crown-post roofs on corbelled brackets, and the aisle has a trussed-rafter roof. The division between nave and chancel is marked by arched braces below the westernmost tie beam of the chancel roof. The floors are C19 tiles, with raised wood floors below pews. In the sanctuary are encaustic tiles and re-set grave slabs, one dated 1776.

PRINCIPAL FIXTURES: Chancel screen has panel dado, open-arcaded main lights and moulded crest. The central doorway has low doors with blind Gothic panelling. The tower screen has cusped arcading over a boarded dado, with central cusped arch. In the chancel the communion rail is brass on iron standards. The font, given by Thomas Bisse and dated 1722, has a rustic Baroque stem with square-bowl, and Gothic concave cover. The C19 polygonal pulpit has Gothic panels and foliage cornice, on a panelled stone base. Nave benches are plain, of 1869, but the choir stalls have ends with poppy heads, some of which are C16. There are few memorials, the noteworthy examples being a neo-classical tablet to Richard Chambers (d 1776), and a wall monument to Daniel Price (date illegible) that shows a mourner (damaged) leaning on a stele. Beneath the tower is a board dated 1795 listing fines for bellringers' misdemeanours. The east window shows the Resurrection in bright colours, possibly by Frederick Preedy. The chancel north window shows St Francis, post 1933, and the nave south-east window shows St James and Joseph of Arimathea, post 1864.

SUBSIDIARY FEATURES: The base and part of the shaft of a churchyard cross have a sundial with copper plate and gnomon, all restored in 1887 (LBS no 151081). The timber-framed lych gate is late medieval (LBS no 151082). Each is separately listed.

HISTORY: The church is of C12 origin and the tower of c1200 shows it to have been a substantial church by that time. It takes its present appearance mainly from C19 restoration and rebuilding. The chancel was rebuilt in 1868 by George Gilbert Scott (1811-78), one of the busiest church restorers of the C19. In 1869 A.E. Perkins, architect of Worcester, restored the nave and added the north aisle and vestry. The porch was added in 1893.

REASONS FOR DESIGNATION:
The church of St James the Great, Cradley, is listed Grade II* for the following principal reasons:
* It has an impressive tower of c1200, retaining original detail, heightened in the C15.
* The main body of the church is a good example of C19 Gothic-Revival architecture, undertaken by one of its leading practitioners, Sir George Gilbert Scott.
* It has fixtures of special interest, including an unusual C18 font, C16 choir benches, and well-designed C19 east window.
* It has group value with the churchyard cross, lych gate and surrounding historic buildings at the heart of the village.