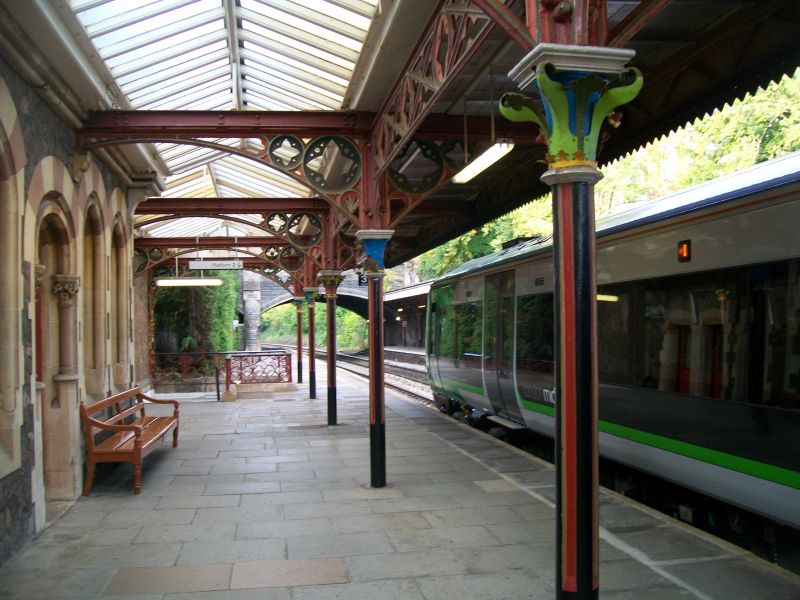 Station buildings for the Worcester and Hereford Railway of 1861-62 designed by Edmund Wallace Elmslie with sculpture and metalwork by William Forsyth.

Station buildings for the Worcester and Hereford Railway of 1861-62 designed by Edmund Wallace Elmslie with sculpture and metalwork by William Forsyth.

MATERIALS: rubble stone with sandstone and limestone ashlar dressings and a slate and corrugated metal roof with cast and wrought iron ornament.

PLAN: platform and station buildings, running N-S at either side of a railway line. The western range of buildings has an entrance front facing onto the station forecourt on its western side and the platform to its eastern side. The eastern range has the platform on its west side and a covered passenger approach slope on the eastern side which descends to join the platform. The station is placed at the bottom of a railway cutting. Both platform ranges are single storied.
The eastern platform building adjoins the Railway Bridge to Great Malvern Station (Grade II) at its northern end and the pedestrian walkway which leads upwards to the former Imperial Hotel building (now Malvern St James's School) both of which were probably also designed by Elmslie.

EXTERIOR: both station platforms have deep canopies which are supported by elaborate, cast-iron girders, which are in turn supported by columns with elaborate capitals. These capitals are decorated with wrought iron foliage which stands proud of the cast ironwork and, in the words of The Builder in 1863 (see SOURCES, Pevsner), 'introduced the foliage of the plants of the neighbourhood'.

THE WEST PLATFORM RANGE: the west front looks onto the station forecourt which has an oval carriage circuit, leading off Avenue Road, with a central, raised garden. The principal part of the front is framed by gables, with a joined group of three to the left and a single gable at right. Three of these gables have circular, stone vents with arched hoodmoulds. Across the front there is deliberately random fenestration, in accordance with the various internal functions. The majority of the windows had arched heads, but three are square-topped and there is a canted bay window to left beneath one of the group of joined gables. A pair of windows to left of centre has elaborate, decorative brackets which support timber-framed gablets. A trio of windows in a slightly projecting wing with a hipped roof form a symmetrical grouping with a two-light window to the centre and lancets to either side. A basket-arched entrance is set at right of centre, with variegated voussoirs to the arch. Doors are semi-glazed and windows are sashes. At far right is a horse trough, slightly recessed beneath a relieving arch with variegated voussoirs. Recessed at far left is a block fronted by a deep area, formed by the inclined approach to the forecourt from Avenue Road. This block has blind stone walling with a doorway. Its roof has a penthouse with louvered sides and a glazed, pitched roof, to the centre of which is a single ashlar chimney stack. Stacks across the building are to full height and have offsets and moulded tops. Ridges are decorated with cast iron cresting and wrought iron finials.

A new ticket office was formed in the late C20 in a gap between two C19 buildings at the southern end of this western range. It incorporates a wide, C19 basket arch on its eastern side which leads out onto the western platform. Its roof and western wall are glazed and the roof extends to the west to form an awning.

The platform front has sash windows in arched and flat-headed surrounds and semi-glazed doors, as before. There is a canted bay window and two of the doorways have colonettes at either side with carved foliate capitals. Door heads have basket arches with variegated voussoirs and fanlights. There is a wall-mounted post box to the southern end, with the initials ‘VR’ in relief, and a platform weighing machine is set in front of the bay window and has a large cast iron plate set flush with the platform surface which bears the wording ‘TO WEIGH – 20 CWT / HENRY POOLEY & SONS / BIRMINGHAM / & LONDON’. An underpass connects the two platforms and has brick walls and a balustrade of cast and wrought iron panels to each platform.

THE EAST PLATFORM RANGE: the western face of the eastern platform has 13 columned bays, divided by cast iron columns with capitals, as described. The waiting room doorway has a half-glazed door and colonettes with carved heads, supporting the alternately-coloured voussoirs of its basket arch. To either side of this are round-arched windows. The back wall of the platform is blind. The projecting waiting room at the south end has a moulded, ashlar coping and a chimney with offsets and a moulded cap to its centre. At the centre of the east platform rear wall is the entrance to the approach ramp which has continuous glazing to its south side, with frosted glass panes, and a gabled roof. There is a small, rectangular service projection and quadrant-shaped yard immediately to the south of this, both of which appear to be original.

Pursuant to s1 (5) of the Planning (Listed Buildings and Conservation Areas) Act 1990, it is declared that the glazed roof and western wall of the late-C20 booking office are not of special architectural or historic interest.

The Worcester and Hereford Railway Act was passed in 1853 and led to a series of buildings at Great Malvern connected with the railway. The station was opened in 1860, and so was the bridge carrying Avenue Road over the line, and the Great Malvern Hotel, a spa hotel, which was built to the east of the line. The architect for the station and the hotel, and probably also for the bridge, was Edmund Wallace Elmslie. The sculptor William Forsyth was employed to work on the buildings and designed the metal capitals of the columns which support the canopies above both platforms of the station, and the stone capitals at either side of the doorways and openings on both platforms and to the entrance front of the western range.
A watercolour of 1940 by Raymond Cowan, painted as part of the Recording Britain topographical series and housed at the Victoria & Albert Museum, shows the original, elaborate clock turret which formerly sat on the ridge of the central block on the west side. This had been removed by the time of a photograph taken in August 1959. This same range was subject to a fire in April 1986 which destroyed part of the roof, although the walls were left largely intact. The range was restored in 1988. Following this fire a new ticket hall was built to the south end of the western range incorporating parts of the original structure.

The buildings at Great Malvern Station are listed at Grade II for the following principal reasons:

* Group value: the station buildings have very strong group value with a group of related structures connected to the railway many, and perhaps all, of which were designed by EW Elmslie;

* Intact survival: despite some losses and fire damage in the mid-C20, the station buildings are largely intact overall.