A Grade I Listed Building in Holt, Worcestershire 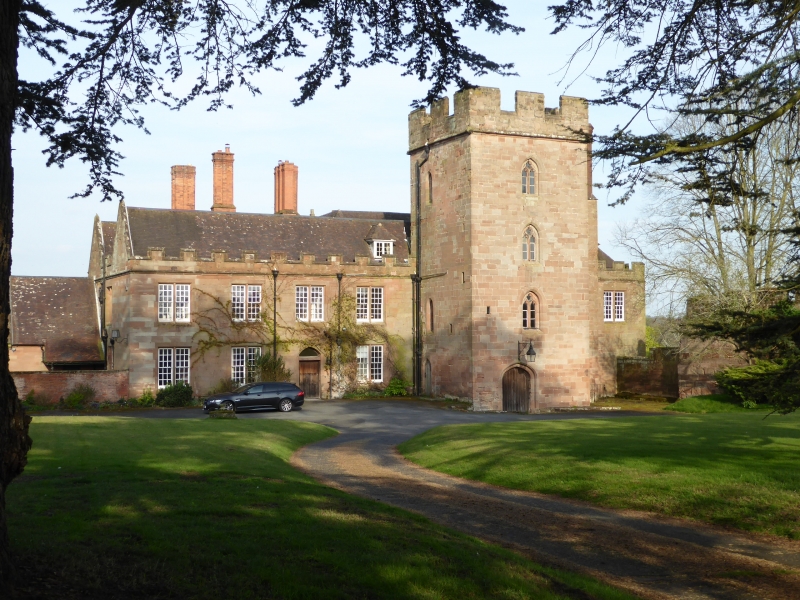 Fortified house. C14 tower; rest of original fortified structure rebuilt C15,
altered in C16, remodelled early C18, further additions and alterations mid-C19.
Coursed sandstone rubble, sandstone ashlar, tiled roofs, partly 2-span having
gable end parapets, partly hipped, all behind embattled parapet; large external
sandstone chimney at front right with 3 diagonal brick shafts and oversailing
cap courses; additional large brick stacks in valley behind front ridge.
Square tower; main building adjoins east elevation, its rectangular plan
incorporating an L-shaped fragment of C15 building in form of large hall to
front of south end and a solar wing, now at the centre of the house, which
projected eastwards and is expressed in the gable which interrupts the embattled
parapet in the east elevation; originally it also had a west gable too. During
the C16 the hall and solar were floored and fireplaces built. Probably once a
south service wing which was demolished when the south wall of the hall was
rebuilt in c1700, and the plan was squared up by the addition of a hipped wing,
east of the hall block in the angle with the solar, containing a staircase and
drawing room. The entire structure was refaced at this time and the interior
was remodelled. During the mid-C19 two wings were built onto the north wall
of the solar portion, matching the early C18 refacing; a further extension
was added to the gable end of the easternmost wing, shorter in length and of
lower height. Tower: 4 stages. Walls are 4 feet thick at base. West
elevation has a pointed arched doorway with double planked doors, and each
of the three stages above has a pointed arched window with 2 cusped ogee-
headed lights and a quatrefoil light above; there is a small rectangular stair-
light on the second stage. The north elevation has a pointed arched planked
door, and a pointed arched window with a single cusped ogee-headed light on
the second and fourth stages, and 3 rectangular stairlights down the right
side. The south elevation has 3 narrow loopholes to its lower stage and a
window to the second and fourth stage similar to those on the north elevation
with 2 stairlights at the far left side. The east elevation has a blocked
window. Above the fourth stage is a string course, with grotesque heads
at the corners, beneath an embattled parapet. Main building: 2 storeys, attic
with hipped dormers and cellar; string course beneath embattled parapet and
between main storeys to south and east elevations. West front elevation: to
left of projecting tower fenestration is regular, having paired 18-pane sashes
with central splayed mullions, 3 pairs at ground floor and 4 pairs at first
floor level, and a pointed arched doorway with planked door and arched plain
fanlight beneath the third pair on the first floor; at the far right is a
hipped dormer with casement window. To right of tower is the large external
sandstone stack, flanked at first floor level by paired 18-pane sashes.
East garden elevation Irregular fenestration; right of centre gable end of
former solar breaks forward having ground and first floor multi-paned sashes
with side lights, a long C16 4-light mullioned window in the gable with a small
light above in apex. On left side at south end are 2 large multi-paned ground
floor sash windows with 2 glazing bar sashes above; to right of these are 2 long
multi-paned stairlights which overlap both storeys, beneath the left one is a
small 6-pane sash and beneath the shorter, right window is a part-glazed door
and 6-pane fanlight. Two flights of stone steps lead up to doorway, with
elaborate wrought iron railings and, at the top, the initials WB and MB inter-
twined, presumably the intermarriage of the Bromley and Beauchamp families.
Beneath the steps is a trefoil-shaped cast iron trough, with a frieze of
figures and a grotesque mask set in curved back providing the fountainhead.
There are 3 hipped dormers with casements behind the parapet above this left
side of the east elevation. On the right side of the gabled section are 2
paired 18-pane sash windows on the first floor, and a group of 3 and a pair
of similar windows on the ground floor, all with chamfered mullions; in the
east wing extension is a glazing bar sash. The south elevation has regular
fenestration; there are 4 ground floor 18-pane sashes with 4 first floor
glazing bar sashes and 2 hipped dormers with casements. Interior: Tower:
ground floor divided into two having a C15 vaulted corridor into main build-
ing with 2 narrow chambers on south side. In thickness of north wall is a
straight flight of stone stairs to the first floor now reached through door
in north external elevation, but originally approached through doorway in
solar part of house, now blocked. Also spiral staircase in south-west corner,
now blocked and upper flight broken away. Main building: solar roof believed
to retain C15 timbers. On ground floor west wall has blocked doorway to cellar
in angle with tower, and beside it blocked entrance to tower stairs, as
previously referred to. Attic floor of solar divided by C16 partition, both
rooms having remains of C16 plastering. Early C18 dog-leg staircase with
narrow turned balusters, moulded handrail and panelled dado. Hall, dining
and drawing rooms all have early C18 panelling and finishings.
Tower believed to have been built by John Beauchamp, the first lord Beauchamp
of Kidderminster, who was executed in 1388.