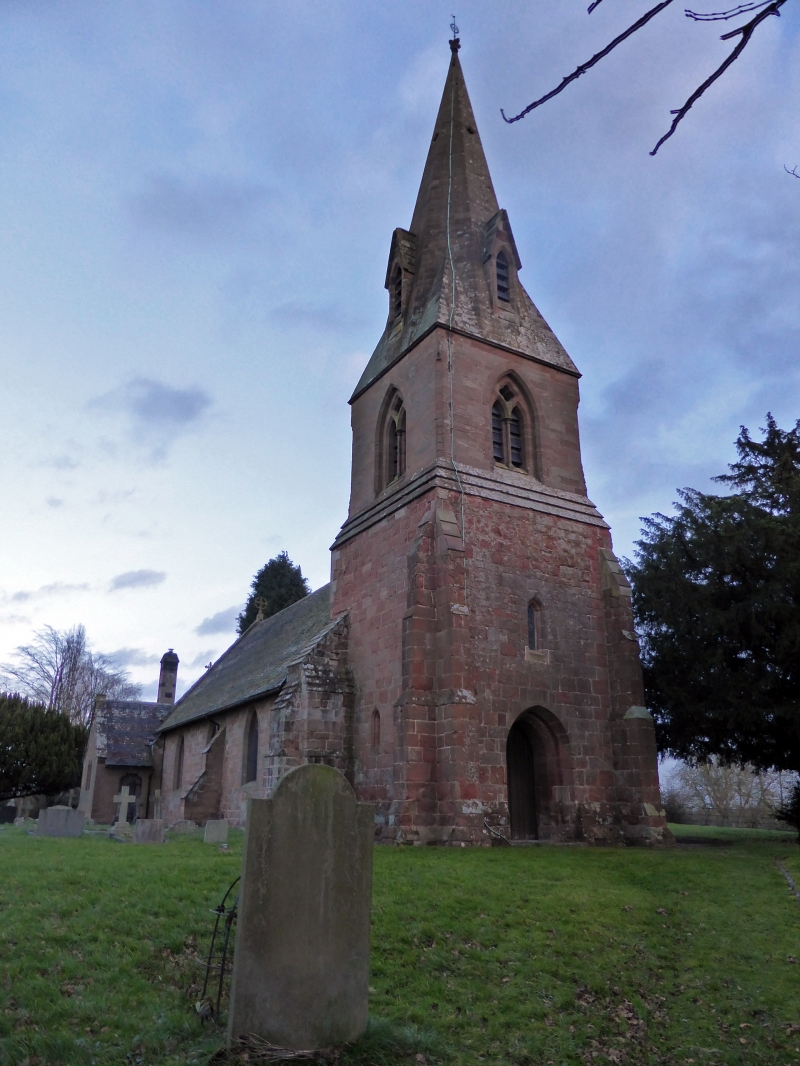 Parish church. C12 origins, rebuilt early C14 incorporating some C13
features, restored mid-C19 and new spire added in 1863 by A E Perkins
Coursed sandstone rubble and sandstone ashlar, tiled roofs, gable end
parapets with kneelers and cross finials. West tower, 3 bay nave with
south porch, 2 bay chancel and north vestry. Decorated style. West tower:
added at end C14, in 1791 steeple was demolished and belfry stage and spire
built in 1863. Three stages; 2 lower stages have angled corner buttress
and project beyond belfry stage; lowest stage has pointed arched planked
west doorway and ogee-arched lights in north and south elevations. Second
stage has ogee-arched light in west elevation; at belfry stage corners
have cusped chamfers; 2-light louvred belfry openings and moulded cornice
above; broach spire has 4 lucarnes with quatrefoil openings above; finial
and weathervane. Nave c1320. North elevation has off-centre buttress
with offsets and 3 C19 2-light windows. South elevation has a buttress
with offsets each side of central porch and one at east end; between the
porch and each buttress is a cusped lancet of C14 date and there is a C14
2-light window between the easternmost buttresses. South porch: C19; flank-
ing buttresses at gable ends, pointed arched doorway with reveals and columns
in jambs with moulded caps and bases; side walls each have 2 quatrefoil
lights; south doorway is C19, pointed arch, deep reveals and painted
inscription above, now illegible. Chancel: much rebuilt in C19; angled
buttresses with offsets at east end; C19 3-light east window; 2 lancets
in north and south elevations, all C13 except for north-east one which is
C19 and larger. In south wall is a C13 door with pointed arch Vestry C19;
gabled with chimney at east side junction with chancel roof; paired cusped
lights in gable end; west doorway with 2-centred arch with raised flat head.
Interior C19 chancel arch, pointed, columns with moulded caps and bases in
jambs. Tower arch has 2 massive orders rising from chamfered abaci, both
arches and south doorway have painted inscriptions over arches, C19 roofs
with swept wind-braces above wall-plate, those in chancel are cusped. Chancel
has C13 piscina, C17 altar table with linenfold carving; C19 altar rails with
foliated decoration; sill of north-east window has alabaster slab, corbelled
out from wall and used as credence; C19 pointed doorway into vestry at west
end of north wall. Plain C19 font and pulpit. Memorials: against north chancel
wall is an alabaster altar tomb with 2 effigies in C17 armour, one lying upon
the slab, one fitted into the space beneath; behind are kneeling figures of 2
women in round-headed arched recesses on Ionic columns with full entablature
above; all ornately panelled and decorated with 4 coats of arms, the highest
central one belonging to the Washbourne family. An inscription records that
John Washbourne had the monument built for himself, his 2 wives and his father,
who lies beneath; the tomb was restored and repainted in 1863. At the south-
west end of the nave is another alabaster chest tomb, removed there from the
chancel. It has 2 recumbent effigies of another John Washbourne, died 1615,
his wife Alice and their 3 children who kneel against the chest. Above on the
west wall is the Washbourne coat of arms, all restored and repainted in 1863.
On the west side of the tower arch are the old clappers of the original bells,
now mounted on a board Additional memorials include an early C19 one by
J Stephens and a late C19 tablet on the south-nave wall, and a late C18 and mid-
C19 memorial on the north nave wall. Glass: mid-C19 east window, C19 and early
C20 glass in chancel, north nave and westernmost south nave window.