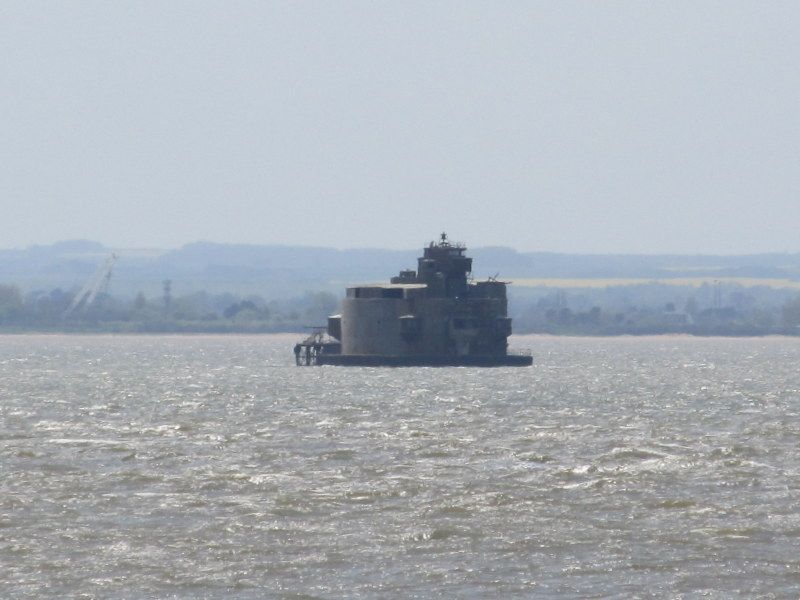 Offshore fort. 1915-18 with minor later alterations. Reinforced concrete
and brick, clad with rivetted steel armour plating. Timber and steel jetty.
Circular on plan with octagonal base and balcony at sea level, and polygonal
jetty to south-west. 3 floors with basement and magazine below sea level,
and central 2-storey observation tower. Plain railings to balcony and
jetty. Rows of windows to lower and middle floors, each with pairs of
hinged steel shutters. The middle floor has groups of 3 projecting turrets
on the north and south sides, facing the main shipping lanes. The central
octagonal turrets, each supported by an attached cylindrical shaft, have a
row of shuttered windows beneath a flat roof; the flanking semicircular
turrets have conical bases and roofs and full-width shuttered openings. The
roof of the fort carries a central cylindrical ventilation shaft; a
rectangular flat-roofed armour-clad look-out tower with shuttered windows,
single projecting square observation turrets attached to north and south
sides, a roof balcony, mast and radio aerials; angular armour-clad flat-
roofed sections flanking a pair of east-facing gun emplacements; a recessed
segmental section of painted brick on the west side, containing 7 windows
with glazing bars and a pair of steel chimneys, and approached by a steel
staircase from the jetty. Bull Sand Fort, with its smaller companion fort
on Haile Sand (Lincolnshire) 3.75 kilometres to the south-west, guarded the
approaches to the Humber with gun batteries and an anti-submarine net of
steel mesh stretched between them across the mouth of the estuary. Bull
Fort had full amenities, including its own fresh water supply, for a
garrison of 200. Armaments, besides the usual small and rapid-fire weapons,
consisted of two 6 inch guns and two 6-pounder guns. A reputed 40,000 tons
of concrete and steel went into its construction, at a cost of £l,500,000.
Both forts were constantly manned during both world wars, and were often
under attack from aircraft and submarine. The Army left in 1956, but the
forts were still manned until the early 1960s, when both were sold to the
Humber Conservancy Board. Cleethorpes Borough Council, Resort Activities
Department, information sheet 05/3, Ships and Vessels of the Humber, 1985.