A Grade I Listed Building in Kirkburn, East Riding of Yorkshire 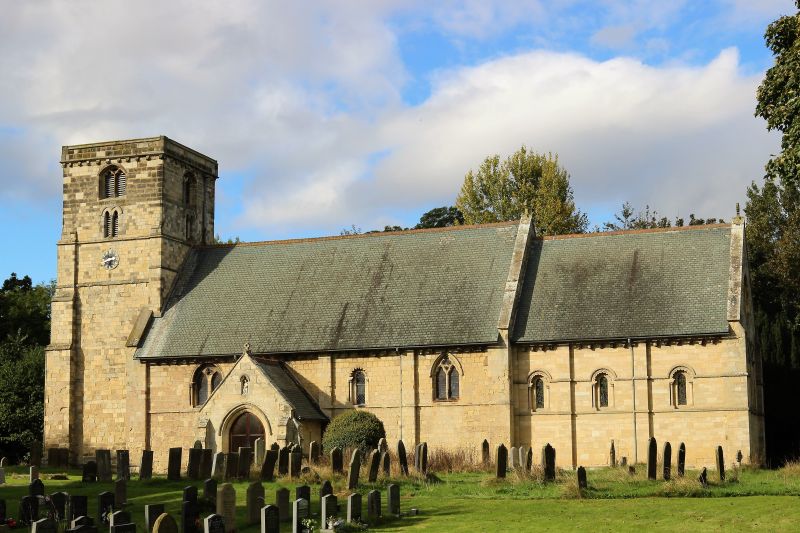 I
Church. c1139 with later additions and alterations, those of early C13 to third stage of tower and including the insertion of some windows and those of C15 to fourth stage of tower and south porch; also with rebuilding of chancel, addition of vestry and extensive restorations to porch in 1856-57 by J Pearson for Sir Tatton Sykes, fifth Baronet of Sledmere. Sandstone ashlar with Welsh slate roof. Four-stage west tower, four bay nave with south porch, three bay chancel with north vestry.

Nave: stepped and chamfered plinth; pilaster buttresses between bays. South side: porch to second bay has plinth and angle buttresses with off-sets. Double-chamfered, pointed-arched entrance under hoodmould, trefoiled niche to gable with C20 statue of the Blessed Virgin Mary. Cross at apex. Within, a round-arched plank door within surround of three orders: the outer order has shafts with scrolled capitals and beakheads to arch, central order has shafts with scrolled capitals and dogtooth to arch, the inner order has shafts with scallop and scroll capitals and arch of zigzag moulding with faces, scrolls and geometric designs; abaci have scrolls, geometric designs and interlacing motifs. Hoodmould decorated with animals and naturalistic motifs. The whole has been partly restored. Nave, south side: continuous sill band. First bay has two-light window with plate tracery, shafts with faces and intertwining motifs to capitals, supporting an order of roll-moulding. To third bay a late Norman single-light window, with shafts, scallops, scrolls and faces to capitals and dogtooth moulding to head. To fourth bay an Early English two-light traceried pointed window under hoodmould with face stops and with head at apex and bearded head on shaft. Nave, north side: entrance to second bay a plank door under elliptical arch within doorcase of single order of nook-shafts with scallop and scroll capitals and with roll-moulding to head. Continuous sill band. Other bays have single-light Norman windows with nook-shafts, faces and other motifs to capitals and zigzag moulding to heads. Corbel table. Nave has stone copings and cross to east end.

Chancel, south side: stepped and chamfered plinth. Pilaster buttresses. Continuous sill band. Norman-style windows are similar to those in the nave but have continuous hoodmould. Corbel table. North side: to second bay a Norman-style vestry has round- arched plank door to west side with roll-moulded hood; to north gable end two rounded lights and a circular window above; corbel table. Otherwise north side has single- light Norman-style windows as south side. East end: continuous moulded sill band with three round-arched lights with scallop and scroll-moulded capitals and zigzag moulding to head and roll-moulded hood. Rose window above. Copings with cross at apex.